Despite well regarded work as a War Artist, Evelyn Dunbar’s art has fallen out of view. The rediscovery of lost works and an exhibition at Pallant House Gallery enable the curious to get a better picture of this quirky, independent artist, whose work ranges from the striking images of the Women’s Land Army to the magical realism of her later works. 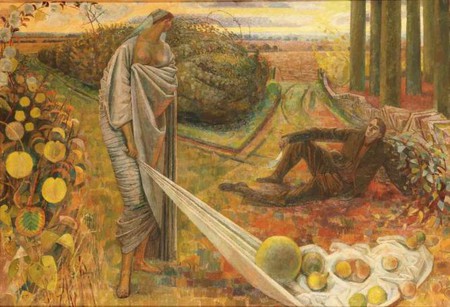 The British artist Evelyn Dunbar (1906-1960) was the only woman working on a full-time, salaried basis as a war artist during World War II, and many of her works are in public collections. But so much has she disappeared from view that when one of her paintings appeared on the television programme The Antiques Road Show, she could be described as unknown. The rediscovery of a cache of Evelyn Dunbar’s works has allowed the Pallant House Gallery in Chichester to mount an exhibition, Evelyn Dunbar: The Lost Works, and to enable us to reassess her legacy. 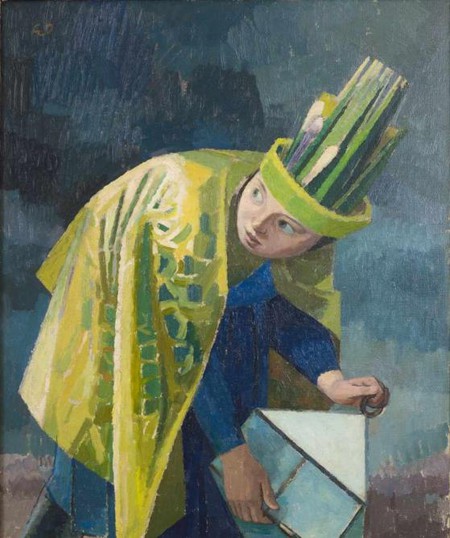 ‘Autumn and the Poet,’ the work which appeared on The Antiques Road Show, is one of Evelyn Dunbar’s last completed pieces. With its depiction of the poet and his muse, its combination of allegory and lyrical landscape recalls Stanley Spencer’s work, though without his satirical edge.

But Evelyn Dunbar’s work has a far greater in range than this. She studied at the Royal College of Art and was involved early on in a mural project in Brockley (the paintings are still in place at Prendergast College). Arising out of this was a relationship with the artist Charles Mahoney, which ultimately faltered because she was a Christian Scientist and he, a left-wing atheist. 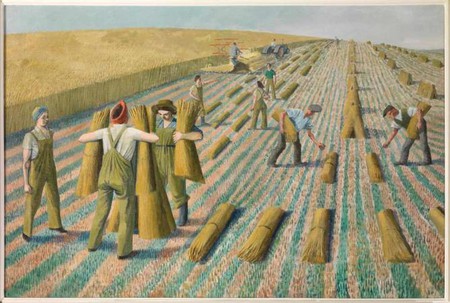 They collaborated, however, on a book – Gardener’s Choice – which was full of pen and ink drawings (a reprint is available from Persephone Books). The recently rediscovered cache of Dunbar’s work includes a number of pieces included in the book, revealing that she did more of the large-scale illustrations than originally thought. Her art had a remarkably practical bent; not only did she do illustrations but also sign board for her sisters’ shop in Rochester, and even designs for canvas embroidery. 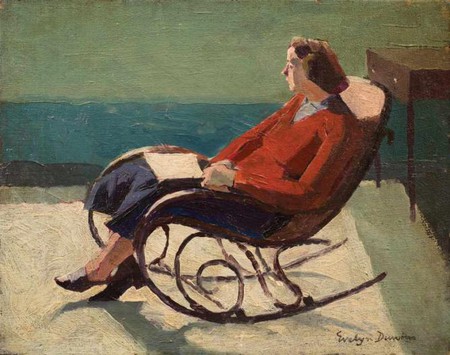 The late 1930s seems to have been a difficult, fallow period for her, and her work as a war artist revitalized her creativity. She painted the Women’s Land Army, and many of the paintings are in the Imperial War Museum, but Pallant House Gallery enabled access to sketches, too. What is remarkable is the combination of naturalism and stylization that her work contains. Again, we come back to Stanley Spencer, but with a different, rather female perspective, with such pictures as ‘Singling Turnips‘ and ‘Milking Practice With Artificial Udders.’ 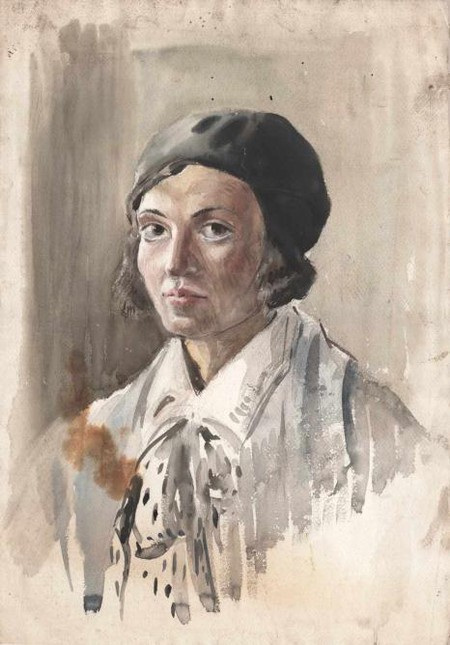 Portraits played a small but significant role in her output. Generally of family members, these ranged from the small and evocative semi-sketches, such as one of her mother, to the fully developed post-war portrait of a retired teacher. There are two self-portraits, one early and the other late – very different in style but with a sense of cool, critical, self-possession. 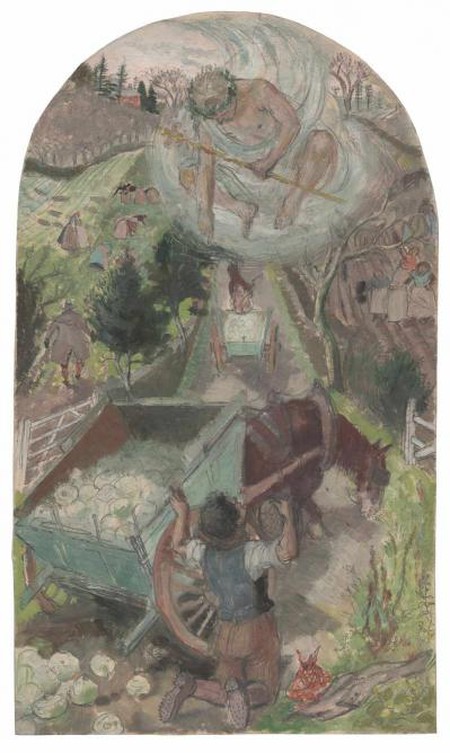 A feeling of other-worldly mysticism threads its way through much of her career. The pre-war personifications of the months for ‘English Calendar’ have an interesting nod to surrealism; then, there is the magic realism of ‘Hercules and the Waggoner,’ an unused sketch for the Brockley murals. This continues with the remarkable, angelic ‘Flying Apple Pickers’ from 1945. Post-war, the lyrical landscapes flow seamlessly into the mystical with ‘Autumn and the Poet,’ and ‘Jacob’s Dream.’ This latter was her last canvas and is interesting in its nod to abstraction; though set in a natural landscape, the angels are simple white shapes.

Marriage and settling down after the war seem to have reduced Evelyn Dunbar’s public persona considerably, but these paintings show that she still had a fertile and highly active artistic life. Her reputation has not been helped, perhaps, by the way that her studio was immediately dispersed in 1960 upon her death. Her nephew, Christopher Campbell-Howes, has a fascinating blog devoted to his quest to identify all her paintings. Another nephew inherited the remains of her studio after the dispersal, and it was in sheaf of paintings by Evelyn’s mother that his wife, Ro Dunbar, discovered the lost paintings. 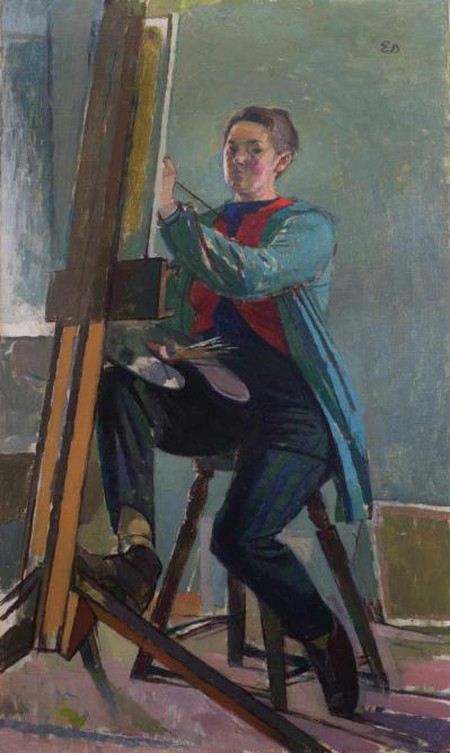 We can catch glimpses of other artists in Evelyn Dunbar’s work – not just Stanley Spencer, but Paul Nash’s landscapes and the English tradition of fine book illustration. But she seems to have remained resolutely independent, and that is part of the fascination: an idiosyncratic voice and a remarkable talent.

Pallant House Gallery’s exhibition is on until 14 February 2016, and there is a superb book to accompany it. Much of Evelyn Dunbar’s work is in the Tate and in the Imperial War Museum; ‘Autumn and the Poet’ is in Maidstone Museum. Hopefully this revealing exhibition helps to develop interest in this unfairly unknown painter.