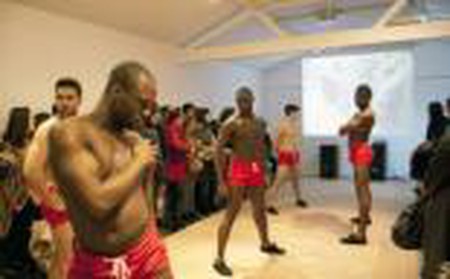 London born and bred Eddie Peake is one of Britain’s up-and-coming talents. His explicit works – involving more often than not naked male bodies and homoerotic scenes – exude a refreshing sense of joy and parody. We look into the work of this provocative artist. 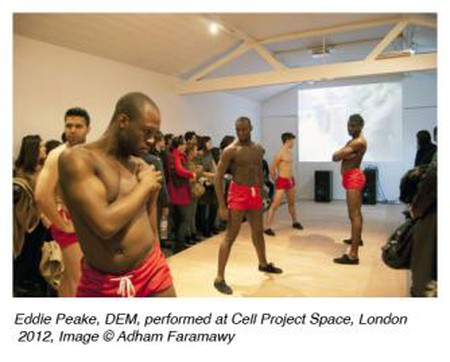 Born in 1981, Eddie Peake graduated from Slade School of Art in 2006 before attending the British School at Rome in 2008-2009. As a multi-medium artist, he applied his creativity to sculpture, painting, performance, curation and choreography. In fact, Peake insists on being broadly defined as an artist rather than strictly confined to a certain practice. Exploring themes such as eroticism, pleasure and gender politics, his work is imbued with playful narcissism. Often including himself in his pieces – sometimes very subtly – he toys with the ideas of self-reference and the artist as genius, without ever falling into the arrogance trap. This is notably visible on his official website; after declaring that he did not see the Internet as a ‘format for experiencing art’, he launched a one-page website in 2006 displaying a close-up of an erect penis held in two hands on a bright fuchsia background. This cheeky initiative overtly mocked many contemporary artists who dedicate infinite resources to their websites, archiving every project ever undertaken along with press cuttings and critical reviews.

More importantly, Peake’s explicit works constantly challenge visitors to deal with the temptation of taking a close look, while potentially feeling ashamed of their own voyeuristic tendency. Tate Modern curator Kathy Noble rightly points out that ‘we all want to look’. But far from being degrading or sinister, these works display a ‘joyful sense of parody’ – a refreshing break from today’s often ‘serious’ artworks. Inspired by the male sculptural tradition and by the hedonist worship of the male body, Peake ostentatiously explores sexual identities as well as the social experience of pleasure. At Premiums 2012 for instance, the second-year Royal Academy students’ show, Peake choreographed Touch (2012), a football game played by naked men only wearing socks and shoes. Although the naked bodies were reminiscent of classical Greek sculptures, the performance was in fact light-hearted, evoking – with humour – homoeroticism in male sports.
Peake’s provocative ideas go beyond the works of art. For his solo show at Southard Reid in 2011, he asked his sister to write the exhibition text, and a quite unique product was published. Clover Peake whimsically alternated typical press release jargon with sexually evocative sentences such as ‘Touch me again – you’ll be aloof and I’ll be strong and powerful and sexy’. As a result, instead of enlightening visitors and providing clues about the significance of the works exhibited, the text only added to their confusion.
Watch the Tate Modern’s Tateshots on Eddie Peake below:

Peake’s has had solo exhibitions at the Mihai Nicodim gallery in Los Angeles, Christopher Crescent in London, the Galleria Lorcan O’Neill in Rome and Hackney’s Cell Project Space. In addition, he participated in two group shows at the West End commercial galleries Jonathan Viner and Sadie Coles. Peake was also one of the emerging artists commissioned by the Tate Modern to perform at the Tank during its inauguration festival 2012 summer.
By Mélissa Leclézio