Drew Pearce On Why 'Hotel Artemis' Is Based in Reality 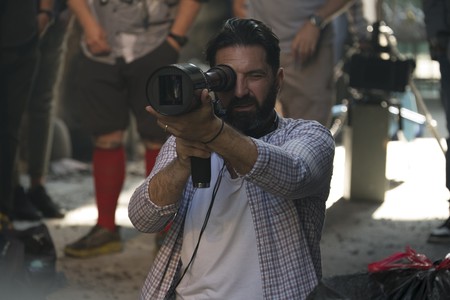 Drew Pearce on the set of Hotel Artemis | © Warner Bros.

Drew Pearce is the screenwriter and director behind some of the biggest films of the last decade. Culture Trip speaks to Pearce about breaking out on his own this year with futuristic thriller Hotel Artemis, and why it’s not all high-concept fiction.

British writer and director Drew Pearce has been involved in genre filmmaking for a while. Having created superhero sitcom No Heroics (2007), Pearce landed the prize job of writing the script for Marvel’s Iron Man 3 (2013). He followed up by writing Mission: Impossible – Rogue Nation (2015) and is now set to unleash his directorial debut. As we found out, however, it’s not easy going from the studio system to independent filmmaking.

“I’ve been making this movie for 18 months, and working on it 18 hours a day. We’ve just finished it and had no idea it would be coming out in the summer against giant blockbusters,” Pearce told us. Indeed, his film about an LA criminal hideout is going up against Marvel’s latest film and the next instalment of the Mission: Impossible franchise. 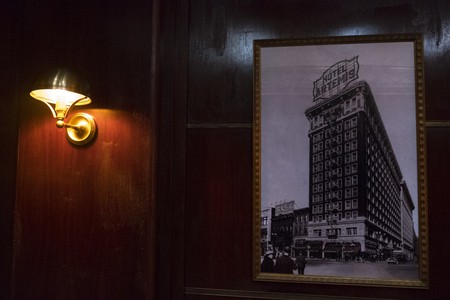 “It’s interesting, with a studio movie, which this isn’t, you have a date to hit. People lose their jobs if there aren’t films being made. For an independent film like Hotel Artemis, people lose their jobs for making it,” Pearce explains. “A week before we started shooting, it looked like the financing was about to fall through. As a first-time filmmaker you live on the edge of anxiety and a breakdown anyway.”

The film is set in the near future, but its established early on that the hotel has been running for a number of years, which brings it into the here and now. Does Pearce think that places like Hotel Artemis exist today?

“I think Hotel Artemis was one of the first ‘Dark Rooms’ (spaces where people can explore their darkest desires) in that world, but I think there are more of them now,” says the screenwriter. “I don’t doubt there is some kind of secret doctor in a place like Hotel Artemis who deals with criminals right now, even in London. One of the big influences on my film was The Drunken Angel (1948) by Akira Kurosawa, which is about a drunken doctor who looks after criminals. That was made decades ago, so Dark Rooms have been around for longer than people think.” 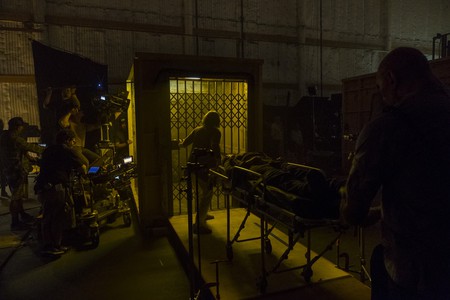 Behind the scenes at Hotel Artemis | © Warner Bros.

The hotel itself is a fascinating mixture of old architecture and modern technology – a contrast that Pearce worked hard to achieve. “For the location, we built a set for the inside in a studio, but there are some Downtown LA hotels we used too,” he says. “The rooftop is the Rosslyn Hotel, the lobby is the Cecil Hotel and the tunnels are from a different hotel. We drew from that 1920s Art Deco design for the sets too. It is a beautiful and distinctive aesthetic. It has the busted glamour of a hundred years ago mixed with the very latest technology that’s been put in there.”

Speaking in more detail about the technology in Hotel Artemis, Pearce says: “I’ve been lucky that with my work on other big budget movies I’ve acquired a group of futurists. Everything from NASA to Homeland Security. All the tech is based in reality. So we see a 3D printer that prints out a liver, and we already have printers that can do human tissue. Organs haven’t quite been cracked, but its only a matter of time. We see a microwave scalpel, and microwave technology and weaponry already exists… you just don’t know about it yet. There’s also a bunch of nano-tech and that is cutting edge now but will be an even bigger influence going ahead. It is heightened reality… but it is reality nonetheless.”

Jodie Foster plays The Nurse in Pearce’s film, the character running Hotel Artemis and caring for its patients. The Silence of the Lambs actress is an unlikely star for this film, and viewers may be surprised to hear the story behind her casting.

“She came to us,” Pearce says. “She got a copy of the script, and we’re not sure how, and asked to meet us. I think she loved the idea of playing that character, someone who isn’t a dedicated woman on a mission, as she has done in the past. She took a break from acting because she couldn’t find something that interested her.”

The director recalls the first time he spoke to Foster about the role: “She was really sweet about it. She said ‘I know you haven’t met anyone else yet, and you have to, but please know I will be here if you want me.’ I knew we were going to use her from that point.” 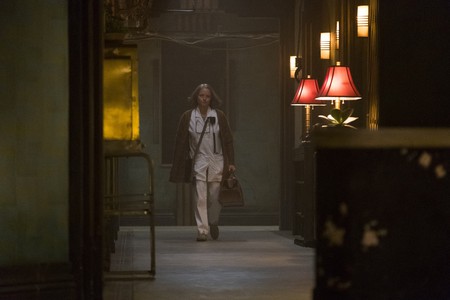 Pearce goes on to explain what it was like pairing Foster with action stars like Dave Bautista and Sofia Boutella. “It’s one of the fun things to do as a director. Getting these actors who are tonally different into the same world is something I’m most proud of,” he says. “The ability to play against type and go against different actors is something most stars relish.

“Dave Bautista couldn’t believe he was going to be in what is essentially a double act with Jodie Foster. It’s one of the reasons he did the movie. It’s hard to hold your own next to experienced actors like Jodie Foster, and lets be honest, there only are lesser-experienced actors than Jodie Foster, who has been doing this for more than 50 years now. But in [Bautista’s] performance you can’t tell.

“I wanted [the characters] to be surprising and, in that way, it felt like an Agatha Christie story where you don’t know who the most dangerous person in the room is at any given moment in this hospital for criminals. Everyone has menace and intelligence.” 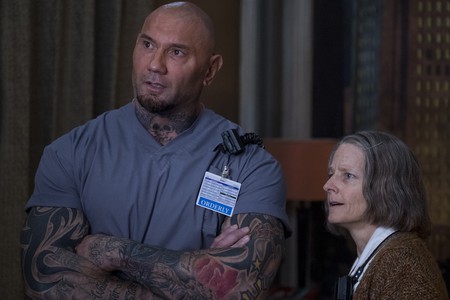 Jeff Goldblum, who plays mob boss Niagra, is built up to be what Pearce describes as the film’s “big bad”, but he brings a more measured energy to proceedings. Was that always the intention with that character? “It had to be,” Pearce says. “I was looking away from the more traditional mob boss.”

Speaking of the figures that influenced the Niagra character, Pearce says: “There was that time in the ’60s when counterculture exploded [in LA]… I loved the idea that the David Geffens of the world monetised that, but are now camel-cashmere-wearing Malibu billionaires… I wanted to see if we could do that for someone who monetised the drugs world of that same period.”

Goldblum’s Niagara certainly lives up to that brief. “I wanted someone who seemed more charming than the job would suggest,” Pearce says. “He is a sheep in wolf’s clothing, or cream-coloured Gucci in this case. Jeff was great for that… He rarely plays bad guys, but he has done it in the past. Deep Cover is an amazing performance from him.” 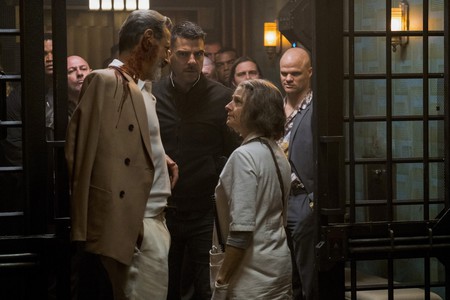 Hotel Artemis is on general release from 20 July