Discover the Technology Weaving New Life Into the Spider-Verse

The making of Spider-Man: Into the Spider-Verse | © Wacom
in association with

Culture Trip takes a look at Wacom’s creative tools and how the team behind Spider-Man: Into the Spider-Verse used them to build a multi-dimensional world full of weird and wonderful characters.

Animation hit Spider-Man: Into the Spider-Verse has just been released to critical acclaim. The movie smashed box-office records on release, and the Marvel adaptation is being hailed as one of the best comic-book movies ever made.

A major part of the film’s success is the incredible look and style of the animation, featuring characters who all possess their own distinctive visuals. There are several Spider-Men, Spider-Women and even a Spider-Pig (or Spider-Ham) all coming together, and from the first draft of the storyboard to the final film sequence, they all had to be sketched, drawn, modeled, sculpted and animated. To tackle this task and keep up with the challenging workflow, filmmakers used Wacom pen displays to create a pulsating universe where anything can happen.

Story artist Miguel Jiron told Culture Trip that he wanted to dive right into the source material when creating Spider-Man: Into the Spider-Verse. To achieve this (something that live-action movies would struggle to do), he and his team bridged the gap between technology and art with the help of Wacom’s creative tools. Efficiency and ease were crucial for the artists given the sheer amount of material being created, and the Wacom tablets allowed pencil, ink and colour passes to all happen in one place. 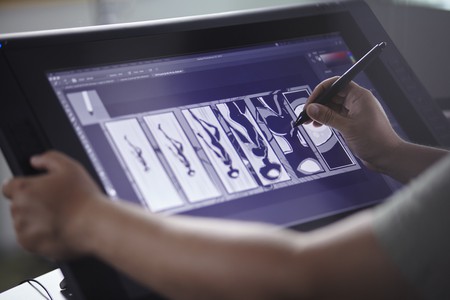 The plot of Spider-Man: Into the Spider-Verse sees teenager Miles Morales become everyone’s favourite neighbourhood hero after Peter Parker is killed in action. Criminal mastermind Wilson Fisk is intent on being reunited with his family, and to do this he employs an experimental particle accelerator that unleashes an infinite number of parallel universes. Joining Morales in his universe are other superheroes with similar powers, all desperate to get back home and put an end to Fisk’s dimension-meddling antics.

One of the many elements that makes Spider-Man: Into the Spider-Verse a joy to watch is the artwork on screen. The artists involved in creating the movie have spoken about how working with a stylus on a Wacom Cintiq creative display gave them more freedom to create the 3D images required for the Spider-Verse than a traditional computer-and-mouse set-up would.

If you want to unleash your own creative superpowers or learn more about the Wacom range used to bring Spider-Man: Into the Spider-Verse to life, you can find more information here.