Dark and Terrifying Christmas Films from Around the World

Here’s a look at the terrifying side of Christmas through the blood-soaked lens of the big screen.

‘Tis the season and all that, and as well all know, films play a huge part in Christmas traditions all over the world. We’re all familiar with the feel-good side of things, but there’s always the darker side of the festive season that movies love covering. 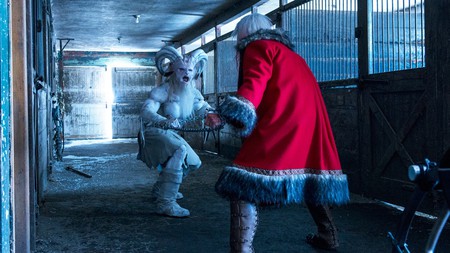 If you look hard enough, almost every Christmas film has a dark edge. Think about Home Alone (1990) where a young boy (Macaulay Culkin) is cruelly abandoned by his family who flounce off to Paris and leave him to fend for himself and fight off a pair of vicious criminals. That fact that the youngster inflicts such unusual (and violent) punishment on the home invaders also raises questions about his upbringing. One for social services, we think, once the new year begins…

Even seemingly wholesome films like It’s a Wonderful Life (1946) feature depressing themes like suicide and the manipulation big businesses. Here’s our New York Editor explaining a bit more about how it wasn’t exactly a wonderful life…

The roots of these bleak themes can be traced back to origins of Christmas itself. We might be familiar with the picture perfect images of a jovial Santa, white snow and celebratory traditions, but it’s a different, often frightening story in different parts of the world. 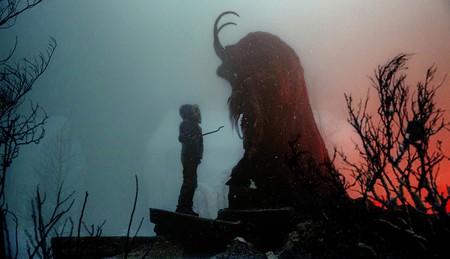 The best known example of this is Krampus, a grotesque take on Father Christmas (sort of). The half goat, half demon entity turns up during the season to punish misbehaving kids. It’s the natural flipside to the rewards ‘good’ children get, but a particularly fearsome answer to the ‘or else…’ part of parents explaining why we should all be on our best behaviour throughout the year.

As an aside, goats (of the full, not half variety) have a special place in European folklore, especially around Christmas.

In Sweden, the burning of the Gävle goat (also known as the Yule Goat), is an annually held event and an extension of the Scandinavian tradition that dates back to Germanic and pagan rituals. Initially an invisible spirit, the Yule Goat would appear to make sure preparations for Yule were well underway. Nowadays, a giant goat made from straw is erected in the central square of Gävle. Unfortunately, every year the structure has been burned to the ground by vandals; the crime itself becoming a dark tradition.

Films often depict goats (especially black goats) and a precursor of something supernatural and evil. A great variant of this is in the recent horror The Witch (2015) where Black Phillip torments a puritan New England family in 1630.

And while we’re on the subject of witches, let’s dwell for a moment on Befana, the Italian witch originally believed to visit children on Epiphany Eve but now more commonly associated with Christmas Eve, similar to old Saint Nicholas himself. Although yet to make it on the big screen, a number of other European characters from folklore have been hauntingly portrayed on film in recent years.

Back to bad Santas now. Although Krampus (2015) was the latest attempt by Hollywood to bring the evil vision of Father Christmas to a wider audience, there are other versions to take a look at.

2010’s Sint by Dutch filmmaker Dick Maas provides another twisted version of Santa Claus. Borrowing from Danish Folklore, Sinterklaas (as he is known) was a medieval murderer who tormented villagers until the locals got together and delivered their own brand of justice. As is the way with such stories, however, Sinterklaas vowed vengeance and with his dying breath promised to return every 32 years to exact revenge. If you haven’t seen Sint yet, it’s well worth hunting down, and certainly a film that proved very popular with the Dutch, who made it the most successful domestic film at the box office in 2010.

As well as gaining a growing reputation in the US, Krampus has always been a mainstay of popular culture in mainland Europe. The ‘evil Santa’ idea is a common one, and a prime example comes in the form of Rare Exports: A Christmas Tale (2010), a Finnish dark comedy that depicts Santa as an untamed beast that needs to be reined in. The male-dominated film, complete with adventurous boys and naked old elves, is a curious affair. Surprisingly high on laughs… and horror!

Humans themselves can be responsible for unhappy Christmases. Take my favourite film of all time, the peerless Die Hard (1988). Ostensibly an ’80s action movie, starring a beefed up Bruce Willis as a New York cop who happens to be ‘the wrong guy in the wrong place at the wrong time’. Our hero, John McClane, is in town to reconnect with his wife following her move to the west coast. McClane finds himself surrounded by yuppies and sycophants, most of whom are more interested in a very different kind of white powder than the sort you find in traditional Christmas movies.

Terrorists, led by Hans Gruber (the late Alan Rickman in one of the greatest screen performances of all-time), take over a high-rise building just as an office Christmas party is in full-swing. Whereas the plot plays out with only a few nods towards the season (‘Ho-Ho-Ho… now I have a machine gun!’), the season of goodwill is ever-present in the background.

Another popular Hollywood film that has gained a reputation as a Christmas favourite is Gremlins (1984). Once again, the origin of the creatures at the centre of the movie are rooted in folklore, albeit of a slightly more modern variety. During the the Second World War, aircraft played a major part in the battles fought in Europe. The technology, however, was still in its infancy, and pilots would regularly report mechanical problems and a myriad of faults. Unable to find the causes in most cases, mechanics would label the issues as ‘gremlins’ in the works. This led to the visual depiction of faults as mischievous creatures and the term has now gained a life of its own in modern parlance.

In the film, directed by Joe Dante, a travelling salesman innocently buys his son a unique gift. The present is a Mogwai, a cute pet that is docile in nature. There are only three rules to follow; no bright lights, no contact with water and absolutely no food after midnight… you can guess what happens next.

It’s obvious that Christmas and folklore tales are inextricably linked. There are a number of positive stories at this time of year, ones that fill us with hope for the future and capture a warm, nostalgic past… but in cinema, just as in real life, we need to keep a watchful eye over what lies in the shadows.