Having made the leap from the relatively small sci-fi comedy Safety Not Guaranteed (2012) to huge blockbuster Jurassic World (2015), Colin Trevorrow is back with an entirely different film again – The Book of Henry. We spoke to the director about why he took on the challenging project before he heads off to a galaxy far, far away…

As most people already know, Trevorrow’s next film will be Star Wars: Episode 9. With the reviews trickling out for his latest film – The Book of Henry – we began our chat by finding out what drew the filmmaker to this movie’s challenging themes.

Colin Trevorrow: I wanted to do something that was different. I wanted to face my fear and throw new challenges at myself. The script felt like an elemental fever-dream for parents. We have those fears as parents about our children being safe; in our lives we live in a constant state of vacillation between comedy, drama and a suspense thriller, and this grabbed me.

Culture Trip: It is a nightmarish scenario for parents (dealing with child abuse, death and the feeling of losing control), were you apprehensive about tackling anything in the film?

Colin Trevorrow: All of it. Every second, and yet I knew there was something in it and I was very confident. When seeing how parents and audiences react to it, I still am. There is something about how it unfolds which feels like it will connect with people who have children. To me, the very idea of suffering such a huge loss and then resetting the family, taps into the jarring sense of everything falling apart.

It is more of a coming-of-parenthood story where she [Naomi Watt’s character] finds her compass after not having it for 95% of the movie.

Culture Trip: You mention how parents would react in this situation, and even as adults who don’t have children I feel like we can identify with that, so how then did you get into the mindset of the younger characters in the film and in particular Jacob Tremblay, who we see grieving the loss of his older brother?

Colin Trevorrow: I have a brother and luckily the connection was there. Henry [Jaeden Lieberher] has the spotlight on him, and his brother [Tremblay] is in the shadow of that. My brother has a great life and has done really well for himself, but I grew up getting a lot of attention for myself. I understood that dynamic and connected to it.

Jacob’s performance really changes throughout the film. It’s a movie in three acts, much like an opera, and very often you get each act being jarringly different to another, moving between romance, comedy and tragedy. Jacob’s performance changes so fundamentally when he loses his brother; we see him become older. He changes his posture and that was a very mature thing to do. 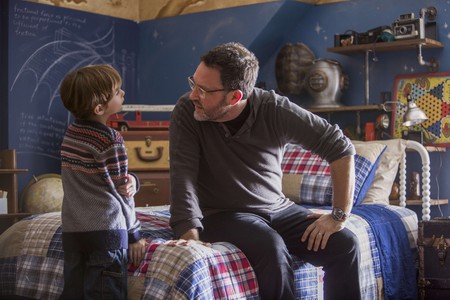 Culture Trip: You mention the jarring nature of the acts and that must have been a hard thing to balance in terms of the tone of the movie? Are audiences inclined not to connect with that shift in tone?

Colin Trevorrow: I actually find audiences will go with this far more than people who watch movies for a living, and we’ve seen that evidenced. We screened this movie all over the country, and audiences reacted so well to it. If you know how movies work and how they toy with your emotions, that can be far more jarring than if you’re an average audience member on a journey. The movie will play best with people who are willing to let themselves be taken on a journey. It’s designed, in a way, like a film that has ghosts, or a big evil, but, actually, doesn’t really have those things.

Because the movie is so small and doesn’t have a fantastical element to it, tonally I don’t think anything changes. The reactions are consistent. A movie like Poltergeist (1982) does have that big shift, and I was interested in that.

Culture Trip: Even Jurassic World has that sort of set-up…

Colin Trevorrow: It is familiar to me. We have a family in a house, with the parents getting divorced, but there is no sign of the terror outside. We have a mom helping a kid put his backpack on and we end with that kid watching a giant Mosasaurus eating a genetically modified dinosaur with a T-Rex and Raptor on either side, that too is different but not in terms of tone.

Colin Trevorrow: Parents. Parents of my generation especially. I’ve seen older people respond to it really well too. I have a four-year-old and an eight-year-old, and the world is a horrifying place. The kinds of fears we have now for our kids are different to previous generations. I could ride my bike in my neighbourhood and come up with a plan when I was a kid, but that’s not a safe thing to do these days. I found the film taps into those fears, but also taps into our children sometimes feeling so much smarter than us, but us still being the adults. It is easy to forget we are the adults sometimes. 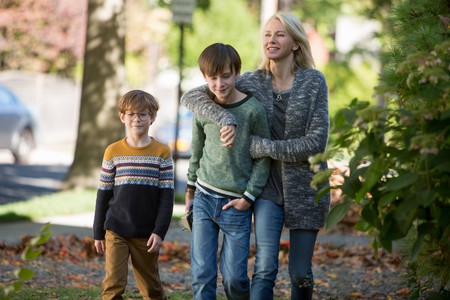 Culture Trip: It must be hard for you not to feel like a kid though, one minute playing with dinosaurs and then getting ready to join the Star Wars universe?

Colin Trevorrow: Sure, yeah. You can imagine just why these ideas would then fascinate me so much. I am like a kid everyday, and I play with these amazing toys thinking that my kids are definitely smarter than me. I have to come home and remember to set an example and be a lighthouse that guides them.

My son has seen this film, my daughter is only four, so she hasn’t yet. He really loved the movie, but in ways that adults probably won’t. He identified that the man next door is an ultimate evil, without possibly understanding in what way; we had a conversation with Jaeden and Jacob on set about this. I wouldn’t tell any parent when the film is right for their kid, but I imagined it as being one that mothers and teenage daughters might actually end up watching.

You make movies for audiences and people in your life. My wife is French and I think the French are going to love this movie. They talk about issues.

Culture Trip: You’re also working on Jurassic World 2, not as director this time though. Was it difficult to take that step back at all?

Colin Trevorrow: On the first day it was. I was deeply involved in the process until we started shooting, and then, because there are so many elements in the film I wanted to support JA Bayona. He is such a great filmmaker though, that he certainly doesn’t need me to give any advice but I was there as the on-set writer. I was never over his shoulder, and I realised early on there was a moment I could go off and get a muffin and no one would notice or care. I embraced the fact I collaborate.

Culture Trip: We’re sure you won’t have any days off on your next film [Star Wars: Episode 9], so how are you preparing for that?

Colin Trevorrow: It’s the opposite, because I know I will have the support of everyone. I won’t be the writer on that, although I may write around it. I won’t have that constant pressure of doing it on my own. I prefer it. I will have all those different perspectives around me, and we’ll be able to talk about all the different outcomes.

We’re in a time when the intentions of the characters and the filmmakers can be misconstrued, we have to factor those in too.

The Book of Henry is on UK general release from June 23rd.