Charlie Brooker: Black Mirror Is Like a Film 'Without the Sh*t bits' 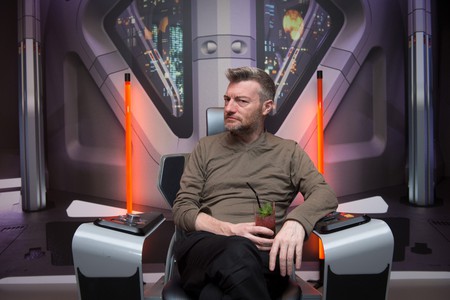 As Black Mirror returns to screens for a fourth series, creator Charlie Brooker and producer Annabel Jones tell us about what to expect in the new instalments of the technology-driven drama. 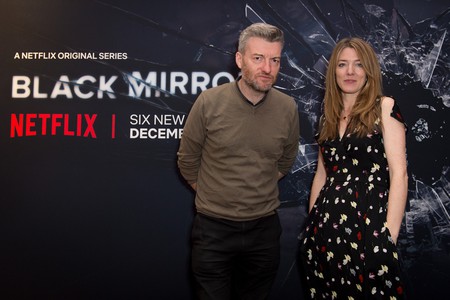 Having started on Channel 4 on UK terrestrial television, the new series of Black Mirror is the second to debut on Netflix (and the fourth overall). With bigger budgets, high-profile stars and bizarre coincidences that have seen the outlandish ideas previewed in their show becoming frightening realities, what can we expect in the new series of the show?

‘People have started to say things like “Trump’s election was a bit Black Mirror or that Brexit was a bit Black Mirror”. I don’t think there really is a message though. We focus on the story and thematic things that come in. The show is relatively non-judgmental though. I’m slightly suspicious of shows that say “See. Did you get the message? Did you write it down?” Most of the time we present agonising dilemmas,’ Brooker told us when asked about the reputation of Black Mirror as being about ‘Bad’ technology.

‘Being British we don’t really respond [to being called visionary]. It would be flattering. The show is inspired by things that came before it like The Twilight Zone, Star Trek, Sapphire & Steel, Doctor Who, Hammer House of Horror… We are sort of building on the legacy of those shows.’

Star Trek is the main starting point of the episode entitled USS Callister. Hollywood star Jesse Plemons takes on the part of an overzealous captain which instantly brings to mind another famous adventurer.

‘Jesse’s agent is actually William Shatner’s agent too, so we think he will be flattered…’ Jones responds when asked about Plemons’ performance. ‘He did a great job of channelling him [Shatner]. We saw talent and range, he is one of those rare actors who can do comedy and drama. His ability to take on different characters is incredible. He plays menacing characters but he’s not like that in person… .’ 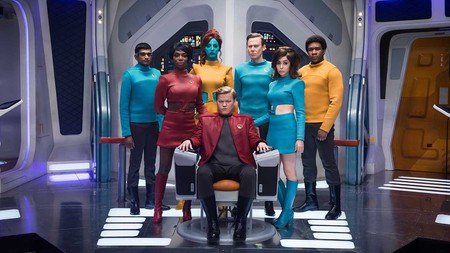 USS Callister might mock some elements of intergalactic shows and films, but it also has some genuinely exciting moments too. Brooker explained how this episode came about.

‘We often think about what haven’t we done yet and space came up. What’s a Black Mirror version of a space epic? It had to play out like that and its a credit to the special effects team that it looks great. Without spoiling it, it has many facets to it.’

With so many ideas having already been explored in the show, is there a temptation to go back and revisit ideas that may have already been depicted on earlier episodes?

‘Yes. In Black Museum in this series we can see similarities to White Christmas in that it is an anthology of stories. Within that we also refer to things we’ve done before and explore different aspects of things we’ve done. It’s a bit Stephen King and popcorn horror. Sometimes it’s quite explicit. Another episode also partly looks back and some of it is as simple as using the same technology because it is unnecessary to redesign things,’ says Brooker.

Jones adds ‘It actually helps [that technology developments move so fast] to come up with new ideas. We observe and get a perverse comic exaggeration of what is happening and then get drawn into a world that you start to sketch.’

‘I hope that that [Black Mirror] doesn’t come across as an anti-technology show. We generally show bad things happening because someone mis-uses technology not that the technology is necessarily at fault. It’s human error or human weakness,’ says Brooker of the show. ‘What is happening is that we are now more openly wrestling with the ramifications of technology than we were when the show started. The other day Twitter rolled out 240 characters for everyone and the first reaction was “oh, fuck. That’s ruined it”. We’re getting to the point where we are more critically examining things and more sceptical as a species.’

Brooker and Jones are fully aware of their show being used as a reference point for seemingly Orwellian advancements in technology around the world. China’s Social Credit System was seen by many as a being alarmingly close to the first episode of Season Three of Black Mirror. The episode Nosedive depicted a near-future society were people would be able to rate one another based on everyday interaction and these scores being accessed by employers, banks and pretty much everyone else.

‘Nosedive really looked at TripAdvisor and Uber. We reacted to something that was happening anyway. I mean if the Chinese government have based their system on our show, they owe us some money. I very much doubt it was that way, but I wouldn’t know if I feel flattered or frightened.’ Brooker responded.

With some episodes running longer than regular TV shows, is there a temptation to bring Black Mirror to the big screen?

‘You get a sense of the size of a story when we discuss them early on. We knew USS Callister would be a big space epic, so it would have to be somewhere between 60 to 90 minutes long. In terms of doing a movie, we already see them as mini-movies so it would have to be a really good reason to go down that route. Otherwise we’re actually in a really good position where we don’t have years of development hell. I always think the nice thing about doing a shorter format is that its like doing a film without the shit bits. You know all films have a shit bit in… at least not on purpose,’ Brooker says.

Of the six new episodes on the latest series, Brooker gave us a brief rundown of what to expect.

Archangel is an indie mother/daughter drama, USS Callister is a space romp, Crocodile is a bleak, dark techno-noir thriller, Hang the DJ is a playful rom-com, Metalhead is a really nasty, brutal survival horror and Black Museum is the Stephen King-esque camp fire horror. You want those differences because otherwise its like an album when you hear the same 18 songs that sound the same. This is like a compilation album with various artists…

Season 4 of Black Mirror launches on 29 December on Netflix.