Celebrating the 150th year of which Lewis Carroll first published the well-loved tale, Alice in Wonderland, The British Library is to host a remarkable exhibition. This is not only worth the time and space, but it is also free – who needs a better excuse than this! The library successfully reconstructs the world that we have loved and lost ourselves in for more than a hundred years through a complete collection of relevant history and information. 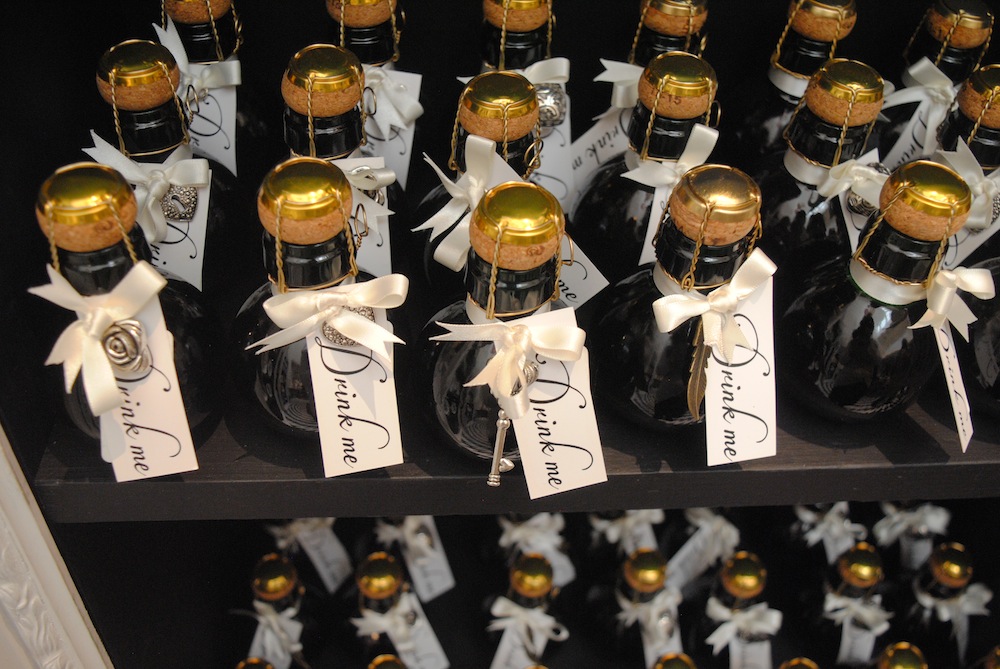 The exhibition creates, if you will, a rabbit hole through time in which we can descend and uncover the story behind Alice’s story, thus demonstrating to us that this tale is not reducible to only one character, or even one author—it is a world that lives on in the imagination and is continuously translated into physical form. Yet throughout the exhibition, with all the Alice paraphernalia on display, such as a calendar, a tea tin, and a themed video game, it becomes clear that Alice in Wonderland cannot even be completely represented in any object, book, or illustration. It is the line between a huge business enterprise and a world of magic that manages to escape and transcend both those identities and the many more that have been thrust on it—it is synergetic. 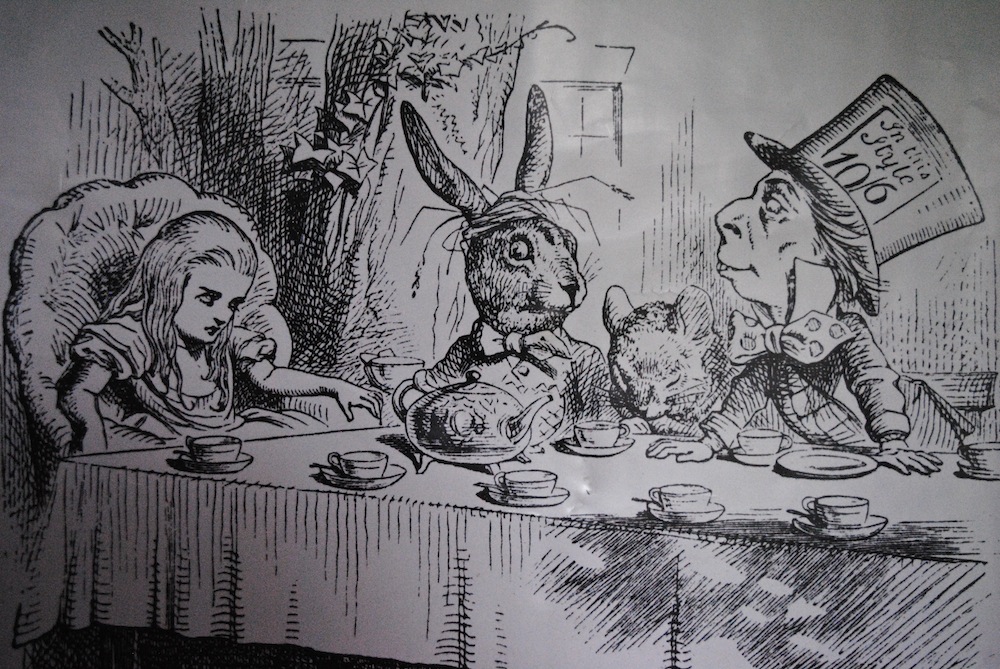 These different identities are a big theme of the exhibition, revolving around the medium of illustration. The British Library has managed to collect an impressive amount of Alice in Wonderland illustrations, which are revealing of both Alice’s story and 20th century history. The illustrations progress from Tenniel’s famous classics through to Edwardian garb, flappers from the 1920s, a phase of art nouveau, psychedelic illustrations from the 1960s, and even some surrealism, spanning the Western artistic traditions of the last century. These varying illustrations suggest that there is something about Alice that enables us to easily map our identities onto her, proving that Carroll created a story that could stay relevant and relatable for longer than a century. But the exhibition also stresses that throughout this time the seeming versatility has actually never really veered away from the original world created by Carroll’s prose and Tenniel’s images.

These two men are the real protagonists of the exhibition: their backgrounds are explored and they are accepted as the unquestionable authors of Alice’s magic. Tenniel’s iconic images have always been central due to the dependency of Alice’s story on images as a source of explanation in writing devoid of much description (even Carroll’s very first manuscript of the story had 37 hand-drawn images). Tenniel invented much of the world we view as integral to Alice today, including the look of a small blonde girl with a blue dress, and illustrators after him found it hard to work under his shadow. It is their efforts that are both celebrated individually and shown as part of a larger chronology during the exhibition. 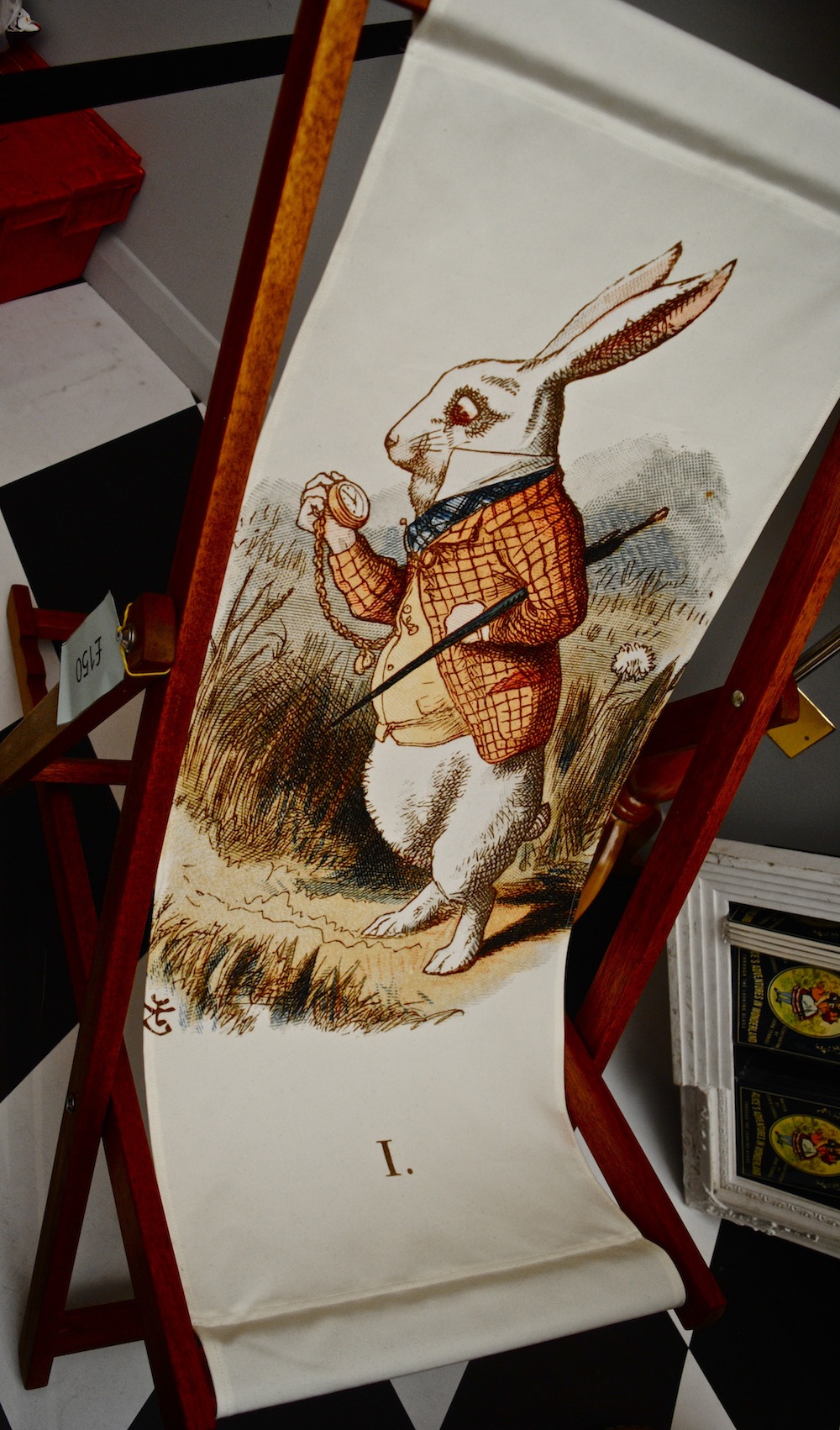 The Business and Personal Sides of Alice

The business aspect of Alice and Wonderland is also apparent. While many of us may consider Alice in Wonderland to be purely a fantastical story, it was almost immediately converted into a recognisable symbol that helped sell themed merchandise—the well-known Disney film is just one example of how it’s been commercialised, many times at the price of its complexity. The fact that the pop-up store is possibly more packed than the exhibition itself proves how successful Carroll was right from the beginning in turning Alice the character into Alice the brand.

Although the brand has become a huge phenomenon throughout the last centuries, examples of how Carroll attempted to capitalise on his invention from the start are on display throughout the exhibition.

The whole story, in fact, of Carroll’s creation, both from a business and personal point of view, is explored throughout. All the steps of the story, from when it was just an idea, to when it became a manuscript, then a book, and finally an industry, are represented with relevant objects, whether in the form of Carroll’s diary, the original Alice in Wonderland manuscript, or a photo album, many of the pieces real treasures. The exhibition, in a sense, is its own story, with a script accompanied by its own images. 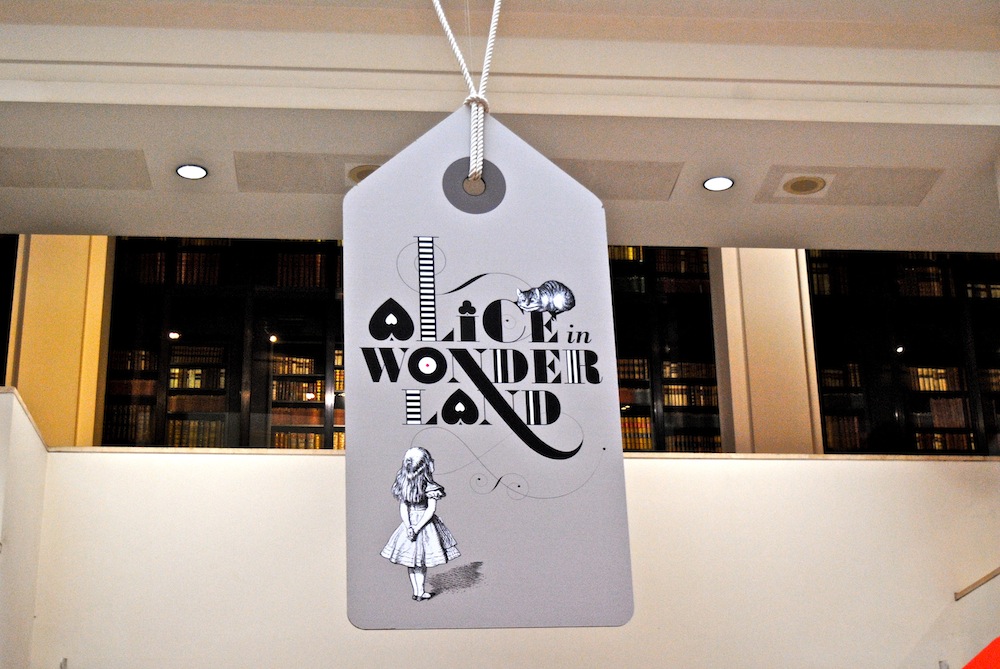 Entrance to exhibition in library | Courtesy of Alyssa Erspamer

The layout of the exhibition itself is thought out and interactive, making it appropriate for both kids and adults. It is numbered, again, as though it were a story with pages, and visitors make their way across it following instructions along the wall mimicking phrases from Alice in Wonderland. The combination of the classic museum style of glass cases and captions with more interactive features, such as clips from movie representations and a chance to play an Alice in Wonderland video game, keeps a visit amusing. All in all a good balance is struck between informing and entertaining visitors of all ages.

The British Library offers all those who treasure this story the chance to re-discover a known world in a new form. In commemorating the 150th anniversary of this famous children’s story, this exhibition reveals both how much it has grown and how deep its roots have remained throughout the generations. Despite the fact this story was created for a child, we are made humble in front of a world that exists both beyond and inside us.

This exhibition will be on display at The British Library until 17th April 2016.