Britain's 10 Ceramic Artists You Should Know About 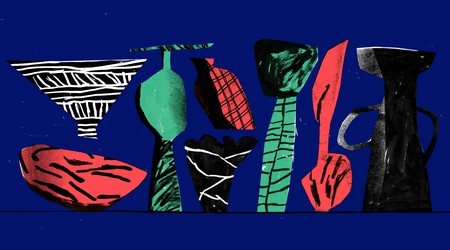 The 20th century resurgence of studio pottery in Britain changed the field of ceramics forever. Influenced by the ancient craft of pottery itself alongside the 19th century Arts and Crafts movement and the 20th century German Bauhaus movement, British pottery was developed through teachings at the Camberwell School of Art and Central School of Art and Design. These ten British studio ceramicists represent some of the key players in the ceramics movement, both past and present. 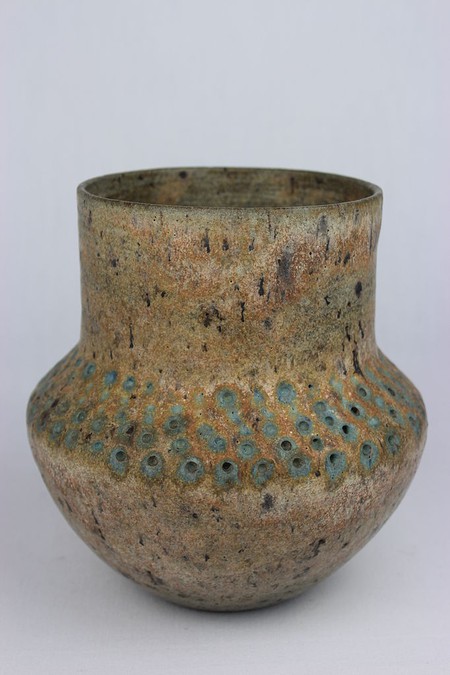 Austrian-born British studio ceramicist Dame Lucie Rie was born in Vienna in 1902. She came to London in 1938, opening a pottery and button-making workshop after the war. Rie taught at Camberwell School of Art from 1960-1971 and was instrumental in the development of British studio ceramics alongside Bernard Leach and Hans Coper, with whom she was friends. As one of the 20th century’s most innovative potters, Rie was awarded an OBE in 1968, a CBE in 1982, and was made a Dame in 1991. Her work, inspired by ancient Roman pottery, trips to France and Italy, and the harmonious architecture-inspired design principles of Wiener Werkstätte, is instantly recognisable and highly collectable. Working in stoneware and porcelain, Rie’s refined creations are distinguished by their seamless integration of form and decoration, giving her work a unique dynamic quality.

Rupert Spira came to the field of ceramics in the late 1970s and early 1980s, now represented in private and public collections worldwide. His early experiences of the material were heavily influenced by his training under Henry Hammond and Michael Cardew, who are considered founding members of the British Studio Pottery movement. He was later influenced by the teachings of American spiritualist Francis Lucille, who further developed Spira’s existing interest in philosophy and meditation. Spira’s technical prowess enables him to work on a monumental scale whilst retaining the intricate attention to detail and decoration present in his smaller works. Spira has also included poetic texts on the surface of a number of of his pieces, some of which he writes himself. It is this elegant combination of poetry, form and surface in Spira’s work that places him at the heart of the contemporary British studio ceramics movement. 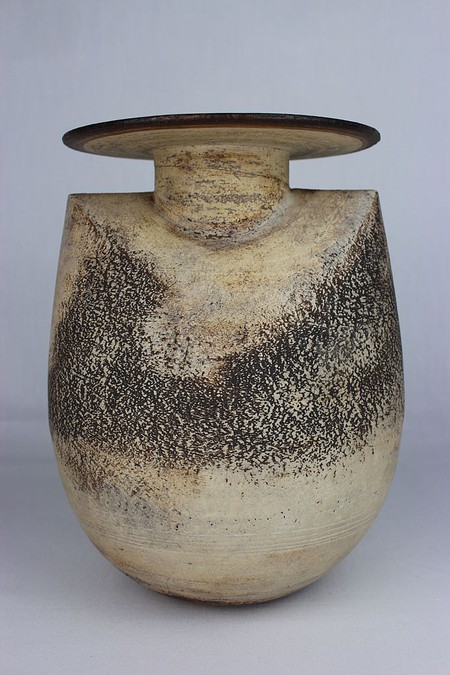 Influential studio potter Hans Coper came to England as a refugee from Germany in 1939. Although he worked closely with Lucie Rie at her pottery in Albion Mews, and taught alongside her at Camberwell School of Art, their work differs dramatically. Coper’s work is abstract and decidedly non-functional. His style marked a break from traditional techniques as used by Leach and Rie, and established Coper as a leading figure in the 20th century studio ceramics movement. Although sculptural in nature, Coper’s works were typically thrown on a potter’s wheel and later altered by hand to create more abstract forms adding texture and colour. His pots would also take on recognizable forms. Coper’s works were widely collected before and after his death and can be found in major museums around the globe such as the Victoria and Albert Museum and the Metropolitan Museum of Art, as well as numerous private collections. 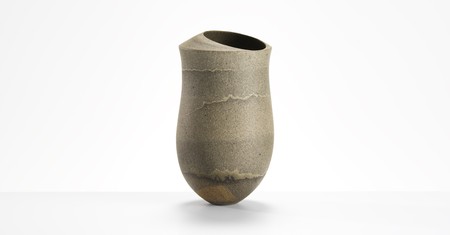 Scottish-born Jennifer Lee began her artistic career working in both ceramics and tapestry. She chose to make clay her primary material in 1980 whilst studying at the Royal College of Art in London, and has since gone on to become a prominent figure in contemporary British studio ceramics. Inspired early on by a scholarship in the United States where she visited ceramic artists, and later by travels throughout the USA, Europe, Egypt, India, Australia, and Japan among others, Lee’s pots are all handmade and colored using metallic oxides added to the clay before it is formed. Issey Miyake collaborated with Tadao Ando on the exhibition U-Tsu-Wa, a large-scale installation held at the Miyake Issey Foundation, 21 21 Design Sight in Tokyo. Jennifer Lee was invited to take part in the show by Issey Miyake with a display of ceramic pots that appeared to float on the surface of a crystal clear pool of water. Lee’s work is collected by prestigious venues such as the Metropolitan Museum of Art in New York and she exhibits regularly in London, Sydney, Japan, and Los Angeles. 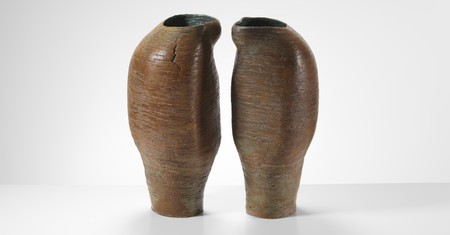 Sculptor and potter Ruth Duckworth was instrumental in the development of British studio ceramics in the second half of the 20th century, alongside contemporaries and fellow refugee Lucie Rie. By approaching clay as a sculptural medium she changed the way people thought about the material and the use of ceramics outside of a functional capacity. Creating refined vessels, figurative sculptures, and installations, Duckworth explored the capacity of the material to create works across a variety of scales including small porcelain vessels, abstract stoneware wall panels and large site-specific installations. No matter the scale however, Duckworth’s work is distinguished by her understanding of form, proportion, and space. A non-conformist at heart, Duckworth fought hard to gain international respect as a sculptor whose main medium was clay. Her work can now be found in most international museum collections such as the MoMA in New York City.

Known as the father of British studio pottery, Bernard Leach’s influence on the art form was profound and long-lasting. From his St. Ives studio, Leach pioneered the concept of the artist/potter, navigating the choppy waters between form and function, art and craft. His work was characterised by its simple utilitarian style; their rough natural glazes and functional designs had a quiet beauty which posed a counterpoint to the fine art ceramics of previous generations. Leach was recognised for his work with a CBE in the United Kingdom in 1962, and his studio remains open today, holding workshops for potters keen to learn from his democratic and restrained aesthetic. 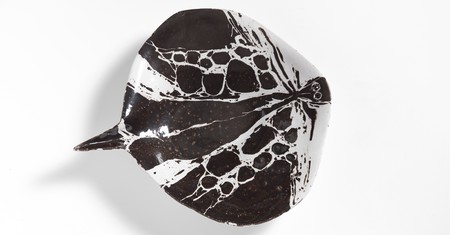 James Tower’s work displays a variety of skillful approaches to the ceramic discipline, including domestic pottery, terracotta sculpture, and large abstract forms artfully glazed so that they appear more as three-dimensional paintings. The subtle array of visual effects and designs presented in the decoration of Tower’s work is artfully combined with the nearly primitive nature of their construction. This juxtaposition appears to have arisen from his focus on artistic expression over material early on in his career. Inscribed onto the surfaces of bowls, plates and vessels Tower’s designs transform their hosts from functional ceramic forms into works of art. Key influences in Tower’s work include Clifford Ellis, the director at Bath Academy of Art where he taught, Henry Moore, and the English Modernists. It took a long time for Tower to become an established exhibiting artist, but his truly unique approach has led to his works being widely collected. 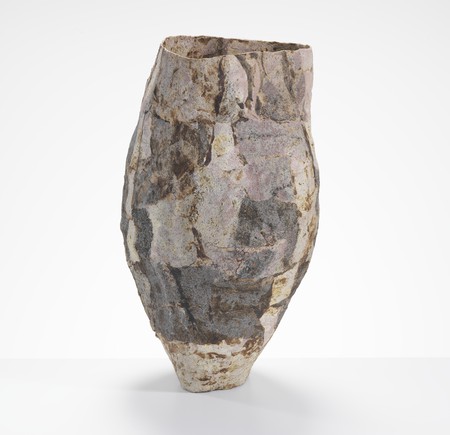 Ewen Henderson studied ceramics under Hans Coper and Lucie Rie at the Camberwell School of Art, but his first love was painting and sculpture. These early influences are clearly present in his work in ceramics, and were a constant feature throughout his career. Although he started off working with thrown forms, Henderson soon moved away from the potter’s wheel to focus on hand-built forms as this technique allowed much more freedom for expression. Additional influences in Henderson’s work include ancient cultures to geological forms and British landscapes. In his practice he strove to explore clay as a medium in its own right, highlighting the material’s tactile properties. In many ways his torn, fragmented, and complex ceramic structures were the three-dimensional formations of his watercolour and gouache paintings and collages. 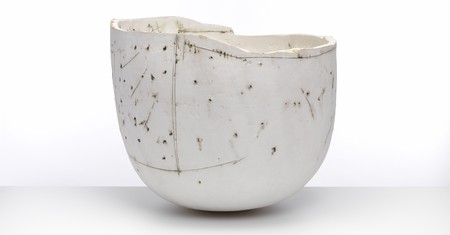 Gordon Baldwin, 'Drawing in the Form of a Bowl', c1991 | Courtesy of Erskine, Hall & Coe, Photography by Stuart Burford

A student of the Central School of Art and Design, Gordon Baldwin had a successful career as a ceramicist for over 50 years. His approach was described as a “non-search for beauty,” resulting in large, abstracted hand-built vessels in stoneware that were then covered in white slip to create a blank canvas for brushwork. With striking linear and organic qualities, Baldwin’s works explore the relationship between inner and outer space. His works, almost awkward in character, demanded attention for the skill they portrayed, particularly in his masterful combination of sculpture and painting. In this way Baldwin challenged the notional differences between ‘art’ and ‘craft’ within the field of ceramics, a debate that continues to this day. Baldwin was awarded an OBE in 1992 and is widely recognised as an influential British studio ceramicist with work represented in public collections around the world.

Award-winning artist Richard Slee is one of Britain’s most important contemporary studio ceramicists, best known for his colorful Disney-like creations which defy the notions of the traditional studio ceramics movement. Slee’s work is also key to the ongoing debate on the position of certain ‘craft’ materials such as clay within the contemporary visual arts, defending the material’s validity as an artistic medium. Slee’s eclectic creations contain strong references to contemporary culture, whilst the use of decoration, symbolism, and ornamentation in his work shows his own passion for the ‘great indoors’ and the domestic interior. More recently Slee has begun to translate his ideas into other mediums such as glass through collaboration with master glassmaker James Maskrey at the National Glass Centre in Sunderland. Slee exhibits around the globe features in numerous international collections such as the British Council (UK) and the Corcoran Museum of Art (Washington DC).