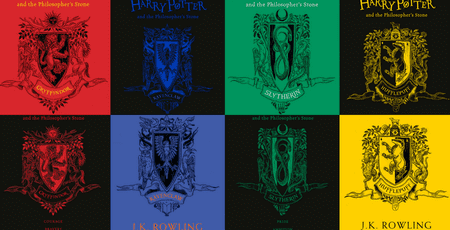 From the new editions' covers | Courtesy of Bloomsbury Publishing

To mark the Harry Potter franchise’s 20th anniversary, Bloomsbury, its historic British publisher, is going all out with gifts and events—including special anniversary editions of The Philosopher’s Stone.

Congratulations, you made it: Harry Potter is 20 years old (the movies, mind you, are only 16—so breathe easy). If you first encountered the sniveling sorcerer in the flower of youth, as is reasonable to expect, then odds are you’re an adult now, eager to relive their childish dreams and tickle whatever’s left of the spark of imagination. If so, then you’re in luck. This year your favorite magician will be far better than just a flimsy excuse to gorge on ice cream or—god forbid—do yoga, he is in fact the subject of a whole range of events planned around his birthday. 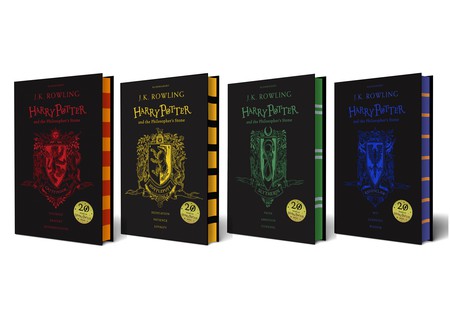 The hardback editions | Courtesy of Bloomsbury

Bloomsbury, which thanks to J.K. Rowling’s series became one of the most successful independent publishers in the world, has prepared a number of events around the The Philosopher’s Stone’s 20th anniversary, chief of which is this month’s publication of four new editions of the first novel. With a design courtesy of Levi Pinfold, each book will be themed around one of Hogwarts’ four houses, their covers featuring the crests and colors of Gryffindor, Ravenclaw, Slytherin or Hufflepuff. Hardbacks will have sprayed-stripe edges and chic-er, black-dominated covers, whereas the paperbacks will be draped almost entirely in house colors.

Other fun things include an exhibit at the British Museum, set to open in October and “take readers on a spellbinding journey to the heart of the Harry Potter stories.” There will also be various prizes, the best undoubtedly being a competition for primary schools in which the lucky winner gets to turn their library into a Hogwarts house—thereby ensuring theirs will forever be the happiest kids in the world.

According to the publisher, the seven novels in the series have been translated into 79 languages, and collectively sold about 450 million copies around the world. Figures which make them, by far, the greatest literary phenomenon of the past few decades.