Beyond Alice, The Story Of Lewis Carroll 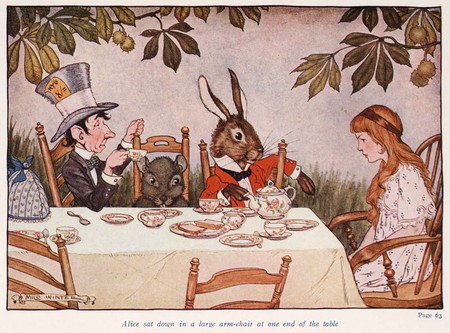 His Alice’s Adventures in Wonderland is one of the most beloved books in English literature and on the cover of the Beatles’ Sgt Pepper’s Lonely Hearts Club Band, his face is to be found between those of Marlene Dietrich and TE Lawrence. There is no need to say much more to express the immensity of Lewis Carroll’s popularity. However, his life and personality remain a complete mystery to most of us. Let’s take a peek through the looking glass and learn more about this iconic writer! 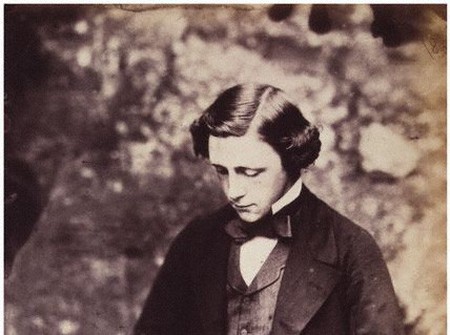 Charles Lutwidge Dodgson (aka Lewis Carroll) was born in 1832 in Daresbury, England. It is often said that childhood is a blessed time in our life, but this seems to have been particularly true for him. All his biographers depicted young Dodgson as an extremely happy and imaginative child who would invent games and create original puppet shows to entertain himself and his ten brothers and sisters. If you thought that Arthur Rimbaud was young when, at the age of 17, he published his first poems; you will be impressed to learn that Dodgson was just 13 when his first revues and poems were published. Nonsense was already very much his cup of tea and several of these poems resembled his later work. It was sometimes said that young Dodgson suffered from dyslexia but there is no evidence that this is true. What we do know, however, is that he had a stammer which he would never completely rid himself of. Legend has it that, as an adult, he only found himself vocally fluent when speaking with children but, once again, there is no proof of this to be true. Despite his handicaps, Charles Lutwidge Dodgson was a very literate boy. Years later, he would even make fun of his main weakness by portraying himself as a dodo in Alice’s Adventures in Wonderland, discreetly referring to the way he would stammer when introducing himself: ‘Do-Do-Dodgson.’ In 1846, the 14 year-old entered Rugby Public School. The years he spent here were evidently disadvantageous as he seemed to become an alarmingly miserable teenager. Later, when his mother suddenly died, he settled in Oxford and started further studies at Christ Church College in 1851. He was not a sociable person at this time and did not make many friends but became a great mathematician. In 1854, he started to work at the college as a faculty member and a maths teacher. 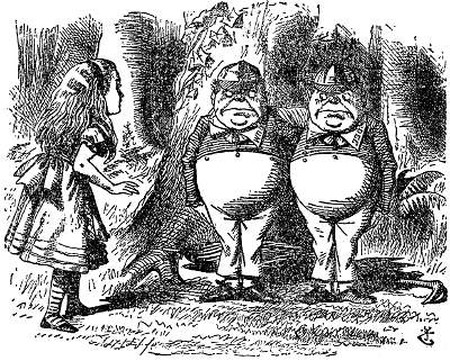 Tenniel illustrations of Tweedledum and Tweedledee, and Alice | © Unf~commonswiki / Wikicommons

Luckily for us, Carroll never gave up on his childhood hobbies and continued writing poems and stories in adulthood. Nevertheless, it was only in 1855 that he began to write under the name of Lewis Carroll. At that time he was regularly writing poems for a magazine called The Train. The first known piece of work he ever wrote under the pseudonym Lewis Carroll was a romantic poem called ‘Solitude’ for The Train. The poem is far from the nonsensical collection of texts he later created, but the last stanza is interesting as it captures the teacher’s longing to return to the lost happy days of his childhood:

‘I’d give all wealth that years have piled,

The slow result of Life’s decay,

To be once more a little child

In 1858 and 1860, the writer published The Fifth Book of Euclid Treated Algebraically and A Syllabus of Plane Algebraical Geometry respectively under his real name. Lewis Carroll was to remain a name for fun and poetry only.

Whilst teaching in Oxford, Dodgson did not only write as a hobby; he also enjoyed viewing life through the lens of his camera. Practicing his new passion, he took multiple photographs of the chairman of the university, Mr. Lidell, and of his young daughters, among them a girl called Alice. The little girl appeared in an incredibly high number of his photographs and it is known that for her tenth birthday, Dodgson told her the story of what was about to become Alice’s Adventures in Wonderland for the very first time. Alice Liddell apparently loved it so much she asked him to write it down. He did so, reworking it and finally offering it to MacMillan Editions. Although the original title Alice’s Adventures Underground was changed to the more appealing Alice’s Adventures in Wonderland, the novel was published for the first time in 1865. 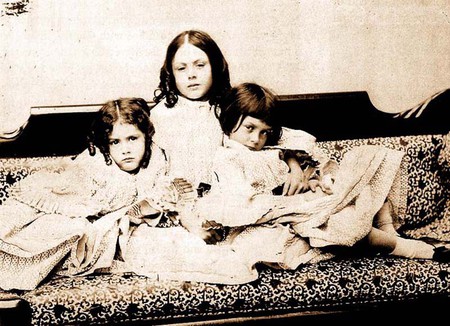 Young Alice could be seen as Dodgson’s personal Lolita. However, Alice’s Adventures in Wonderland is far from Nabokov’s story, although it became just as controversial. The claim that Lewis Carroll was either a repressed or a not-repressed-at-all paedophile was never officially confirmed. Dodgson and his literary alter ego remained an opaque mystery.Two years after Alice was first released, he went abroad for the first and only time in his life, travelling through Europe and to Russia. The following year, Dodgson was devastated by the loss of his father. Although he had a mysterious and serious quarrel with the Liddell family and abruptly stopped seeing any of its members in the same year the book was printed, Dodgson wrote another story about Alice: Through the Looking Glass was published in 1871. He also kept on writing more and more nonsensical poetry, publishing The Hunting of the Snark, Phantasmagoria and several other poems before the end of the decade. Although he was unable to find any new inspiration in the company of the Liddell girls, Lewis Carroll still found it in himself to finish the story of Sylvie and Bruno. For Sylvie and Bruno, he invented ‘Fairyland’ in the same way he had previously invented ‘Wonderland’ and replaced little Alice with the two eponymous characters, making them wander and philosophise as she had done in the two novels he dedicated to her. The novel was offered to the world in 1889 and was the last of his novels. 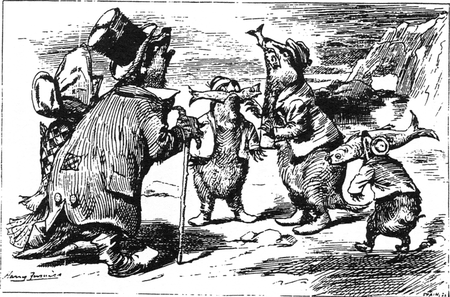 Aside from his obvious literary talent, Lewis Carroll was also an ingenious inventor. He notably invented the nyctograph, a tool allowing a user to write in the dark. As for his private life, what it may have been is overall a mystery. It seems, however, that he never married, nor had any children of his own. He eventually died of pneumonia in January 1898 and remains one of Britain’s most beloved writers today.