It wasn’t until he was persuaded by a friend to attend a local baseball seminar run by an American ex-pat when he would first become familiar with America’s pastime while growing up in England.

Edmonds, from West Sussex, traded in a soccer ball for a baseball, bat and glove.

“I was terrible when I started, honestly,” said Edmonds, a pitcher on the Great Britain national team and domestically for the Southampton Mustangs. “I could probably throw the ball about 15 feet and didn’t have the best hand-eye coordination, but I kept working on it and kept trying to sponge up things from the coaches and got better.”

Baseball to Edmonds and many others in Great Britain is as foreign as American’s referring to soccer as football. Soccer, rugby and cricket dominate the sporting landscape in the UK.

According to BaseballSoftballUK, the development agency for baseball and softball in the United Kingdom that provides services to the sports’ governing bodies — British Baseball Federation and British Softball Federation — in the past five years, baseball participation in the UK has risen 68 percent to 4,000 regular players.

BSUK was awarded £3 million in public funding from Sport England — the agency that delivers the government’s sporting objectives — for the period from April 2013 to March 2017. The funding has been budgeted toward programs that promote the sports in the UK and toward the development of facilities. BSUK announced in October 2014 the plan to develop a two-sport complex in Manchester to be completed in 2017. It will join Farnham Park, opened July 2013, as the only baseball/softball facilities in the UK. 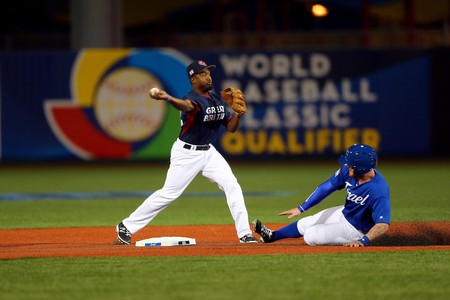 Liam Carroll, coach of Team GB which recently finished runner-up in the 2016 World Baseball Classic Qualifier in Brooklyn, N.Y., said growing baseball in the UK is about increasing both facilities and awareness.

“It’s a struggle,” Carroll said. “Your typical club will have dirt cutouts around the bases and a semi-permanent backstop that’s too close to home plate and players will roll out outfield fencing on game day; pretty makeshift. … Absolutely we need better facilities, but there are so many ways we can grow the game without having to invest a ton of our resources, which are limited, into just facilities.”

Carroll said there is also a shift in target audience. Funding used to be allocated toward growing the game among players 16 years or older, but that is changing to players five years old and up. Getting children playing baseball, instead of soccer for example, at a younger age will only increase the sport’s popularity.

“That for me is going to be absolutely massive to be able to focus more of our resources on children rather than adults,” said Carroll, the son of an English mother and American father who got involved in baseball because his father was a Brooklyn Dodgers fan. “As much as we’ll never catch up with soccer, cricket and rugby, there’s enough to go around. The key for us is to continue to bridge the gap between the schools and the (baseball) club down the street.”

Baseball, though, is not new to Great Britain. The nation hosted and won the inaugural Baseball World Cup in 1938, and it’s from that past Carroll and the national team are drawing inspiration. Their core values come from 1938 — the first, ninth, third and eight letters of the alphabet — Attitude, Integrity, Confidence, Hustle.

Not only are governing bodies in the UK trying to promote the sports with grassroots initiatives, with Team GB doing its part in international tournaments, Major League Baseball is expressing interest in growing the game across the pond in a similar fashion to the National Football League.

MLB is reportedly discussing playing a two-game series in London in 2018. London mayor Sadiq Khan threw out the first pitch at the New York Mets game on Sept. 18 and said to reporters; “I’ve told them (MLB) there are huge baseball fans in London, all around the UK and in Europe. The only way they can experience what we’ve experienced here today is by jumping on a plane to the USA. Wouldn’t it be great if they came to the greatest city in the world instead?”

MLB opened a pop-up store in London’s Covent Garden district on Sept. 12, serving as baseball’s first standalone store in Europe. The store, which will remain open through the end of 2016, sells clothing and memorabilia from all 30 teams.

“MLB is doing a good job investing overseas and the more the game expands and becomes an international sport, the more likely it’s going to be picked up by little kids all around the world,” said Team GB pitcher Chris Reed, who was born in London but grew up in Los Angeles. “I trust MLB to expand the game there.”

Edmonds said an MLB presence in the UK would only increase the sport’s imprint on the culture — BSUK estimates there are 650,000 baseball fans in the UK — and justify those wearing New York Yankees or Los Angeles Dodgers hats simply because they are familiar with the iconic logo.

“There are a lot of guys who wear Yankees hats, but I don’t know if they’ve ever watched a game,” Edmonds said. “American football is growing over there because they play three games a year in the UK. If there was a baseball game in London, the sport would skyrocket and a lot of people would gain interest.”