Anonymous artist Banksy, famous for critiquing society through his work, has created his latest piece concerning the refugee crisis. Gas rips around the face of the small girl from Les Misérables, symbolising the suffering of the innocent. Tears flood from her eyes—the effects of the gas and her experience as a refugee. Behind her flies a ragged French flag, a critique of the country’s handling of the refugee crisis. This particular work comments upon the treatment of refugees in Calais’ ‘The Jungle’ camp in which the French authorities had allegedly used tear gas to ‘control’ the migrants.

For the first time in his art, Banksy accompanies the piece with a QR code. The code leads audiences to a YouTube video of a raid on ‘The Jungle’ camp after dark on January 5th, which seems to demonstrate that the authorities did, indeed, utilize tear gas. The video was posted by the activist group ‘Calais Migrant Solidarity,’ and Banksy shows his own solidarity with them through this link.

The artwork appeared overnight in Knightsbridge, London on Saturday January 23rd, adjacent to the French embassy. This is clearly a comment on French treatment of migrants and, more widely perhaps, Europe’s reaction to the refugee crisis. 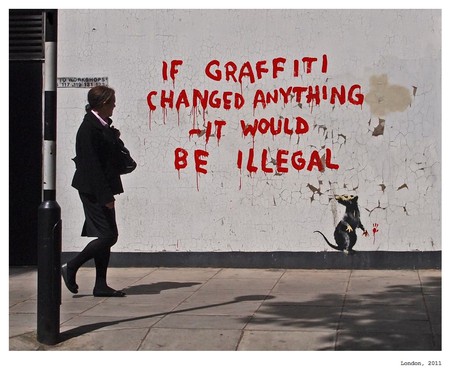 Banksy’s art juxtaposes the refugees’ plight with the West’s monetary values, prioritising their wealth and power over the lives of these less fortunate people. And this particular piece, mounted upon the wall of a luxury building project, is no different. Sure enough, the construction team walked straight into the trap and proved Banksy correct as they swiftly boarded up the work to curb speculation over this statement.

This painting follows similar recent Banksy works on the same theme. For example, a mural of a determined-looking Steve Jobs carrying one of his original Apple computers in one hand and a full, black bin liner over his shoulder with the other appeared in ‘The Jungle’ camp in Calais. In an accompanying statement to this piece, Banksy stressed his point: ‘We’re often led to believe migration is a drain on the country’s resources, but Steve Jobs was the son of a Syrian migrant […] Apple is the world’s most profitable company, it pays over 7 billion dollars a year in taxes — and it only exists because they allowed in a young man from Homs.’ Though Jobs was adopted by American parents, Banksy refers to his biological father who was a Syrian immigrant. 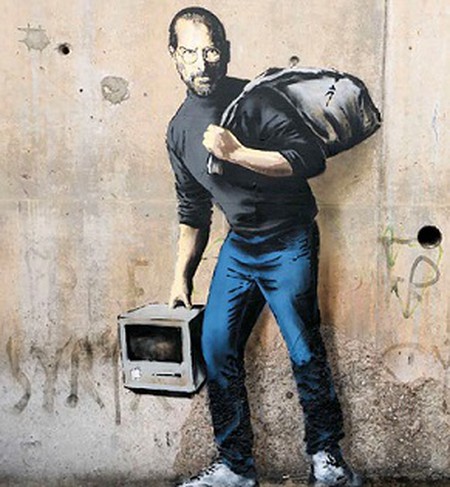 Also across the channel, Banksy produced his own interpretation of The Raft of the Medusa by 19th-century French painter Théodore Géricault only metres from Calais’ immigration office. Whilst the original presented the survivors of a shipwreck, Banksy added a luxurious modern yacht bobbing besides the drowning people whilst they wave for help. This exhibits another critique of the materialistic West which, to Banksy, ignores the desperation and suffering of refugees. Another work appeared by the beach in Calais depicting a child gazing towards Britain, again emphasising the reality that young lives are being taken by this disaster. This too critiques both Britain and France’s lack of aid available for refugees on their long and arduous journey. 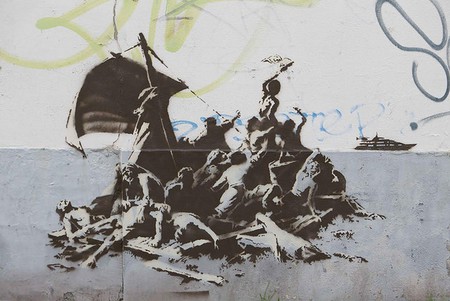 The Raft Of The Medusa | © Peter K. Levy/ Flickr

Elements of Banksy’s heavily covered Dismaland project, a pop-up theme park in Weston-super-Mare that parodied the West’s massive consumer market of Disney, kicked his ‘refugee-series’ off. Particular features included boats filled with the drowned bodies of refugees in their attempt to cross to Europe. On the final night of this temporary theme park, Pussy Riot, a Russian activist group, presented their song ‘Refugee’ to incite European leaders to increase their support for the fleeing refugees. A portion of the materials used to create this pop-up theme park have since been transported to Calais to build solid shelters to replace the flimsy tents being used by refugees. According to the Dismaland website, the resources have already been successfully used across 12 sites. 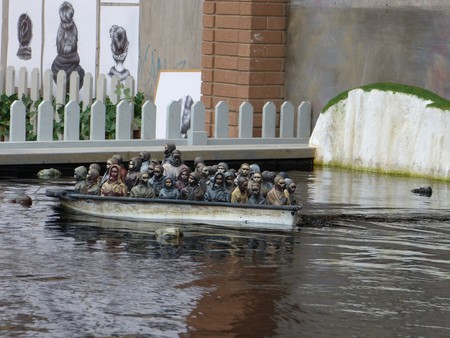 Although Dismaland is Banksy’s biggest project to date, his street art continues to be his most politically engaged and reactive work.