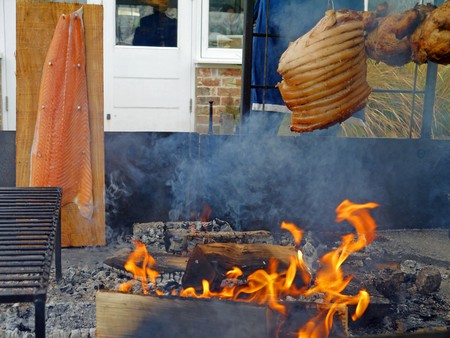 The 'low and slow' method of Argentine barbecue | © Louise Stapley

Summer means barbecue season. Want make sure you impress at the garden parties with your meat-cooking skills? Then read on, as here the experts at Meatopia, a fire-cooking festival in London, provide their tips for the perfect BBQ and tell how to master Argentine fire-cooking, just like Francis Mallmann – an Argentinian chef who’s widely regarded as the archetypal master of barbecue.

When you hear the word ‘barbecue’, what springs to mind? Chargrilled sausages? Burned burgers? Maybe a few chops that have been blackened to a crisp on the outside, but are still raw on the inside? Us Brits may be obsessed with grilling meat on fire, but hardly any of us are truly any good at it. The Argentinians, on the other hand, are true masters.

First thing’s first – you can’t cook on fire without burning something. Mark Parr, AKA Lord Logs, from the London Log Company, says the wood you choose has a serious effect on the final flavour of your food. For example, silver birches give off a citric aroma that’s great for smoking fish. The trees also naturally replenish themselves, making it a very sustainable wood.

Anyone else feeling hot? #meatopiawarmup #meatopia2017

A stack of bricks with a grill over the top is going to give you pretty limited results, so if you want to get serious, here are three options for upgrading.

Go back to basics with a fire pit

Many barbecue geeks swear by their Big Green Egg, which is essentially a foolproof outdoor cooker that smokes, grills and roasts ‘low-and-slow’. You will have to fork out for one, though.

The brains behind the Big Green Egg have a new barbecue called the Ofyr. It’s a round, steel drum that’s as clever as it is beautiful. Its design circulates heat within itself, allowing you to cook on a plate around the rim as well as directly over the flames.

This Patagonian trick doubles up as a great party trick. Loosely wrap a wine bottle in a couple of sheets of newspaper, stand upright and stack wood and coal around it, leaving the top uncovered like a volcano. Carefully, retrieve the wine bottle without toppling the structure. Roll up another sheet of newspaper, light one end and drop it into the centre. Boom. Fire.

@huntergathercook doing his thing with fire lighting! He lit the fire with a cotton wool pad and some ash, creating friction by rolling it between 2 pieces of 2×1!🔥🔥😎😎👊👌#meatopiawarmup #livefire #countryfirekitchen

Instead of throwing things directly onto flames, the Argentinians favour a ‘low and slow’ method of barbecuing. Keep your meat away from direct flame and get it going a good few hours before you plan to eat, and the result will be infinitely more tender and flavoursome. It’s also far more sociable as it eliminates the need for constant prodding, flipping and babysitting.

Awesome cedar planked salmon from @countryfirekitchen great to meet you chap! At the #Meatopiawarmup @pythousekitchengarden such an amazing day of food @meatopiauk #meatopia #fire #smoke #huntergathercook

Invite a few extra people over and pick up a big joint of meat from the butchers. Try hanging a leg of pork to one side of a roaring fire for a few hours for beautiful pulled pork, or brine, season and skewer a whole chicken to cook rotisserie-style. If you have a kettle-style barbecue, a big hunk of beef slow-cooked with the lid on will be eye-rollingly delicious.

If you really want to show off, try making a salt-bake dough to encase meat, shellfish and vegetables, which can then be thrown directly into the embers. Thick-skinned root veg like sweet potato and beetroot can also be nestled in there as they are a great charred and smokey alternative to boring old potato salad accompaniments.

Beetroot and sweet potato going into the mix. Again, we are not skimping on vegetables here. #meatopiawarmup #meatopiauk #vegetables

Making hot-smoked salmon is as easy as nailing a side of salmon to a plank of wood (cedar is particularly good) that’s been soaked in water overnight. Prop it up about a half-metre away from the open fire and give it a few hours to turn pale pink.

Traditional Argentine barbecuing involves attaching a large piece of meat (ideally a whole carcass) to a crucifix-type structure, which is then shoved into the ground leaning over the fire, giving you a slow and even roast where the meat bastes itself as the fat drips down the length of it. This might seem like an intimidating method, but it’s really about as basic as it gets.

Chef Niall Davidson says he loves fire-cooking because it’s all about using your instincts, rather than setting a precise temperature on a fancy gadget like a water-bath. When cooking, he always asks himself: ‘Which way is the wind blowing? How are the proteins in the meat reacting to the heat? Is the fire too smoky? And why does it taste so good?’

Serve it with something living

Nothing goes with meat quite like an acidic, tangy pickle or fermentation. Sauerkraut, pickled onions and kimchi are all brilliant, but they’re even better if they’re homemade – and it’s way easier to do than you might think. Check out Freddie Jansen’s book Pickled for some of the best recipes around.