Anne Hathaway turns the tables on all types of monsters in the quirky, timely and refreshingly insightful monster movie Colossal. 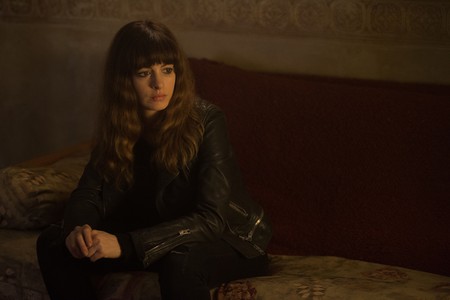 Gloria (Hathaway) is an independent woman with a mind of her own. Unfortunately, she’s also a barely functioning alcoholic, who is struggling to make a living as a writer. She finds herself being kicked out of the home she shares with her English boyfriend Tim (Dan Stevens) and ends up going back to her rural hometown in Middle America to get back on her feet.

On her first day back, she bumps into old school friend Oscar (Jason Sudeikis) who runs a local bar and offers Gloria a bartending job as well has a helping hand to get settled in.

Gloria struggles to give up the booze and finds herself making a pass at Tim’s attractive friend Joel (Austin Stowell) one drunken night, much to the fury of Oscar. In an attempt to walk off the night of excess, Gloria ends up sleeping in a local park. When she wakes up next morning she finds that the South Korean city of Seoul has been attacked by a giant reptile Kaiju.

Through a bizarre series of events, Gloria soon discovers that she is the one who has caused the Kaiju to appear, and that she herself is the manifestation of the monster. Whenever she finds herself in the park at the same time every morning, she appears in Seoul as the beast.

Oscar soon finds out what is going on, and then finds out he too has a manifestation – a giant mechanical robot – that appears when he steps foot in the park. Things are further complicated when Gloria sleeps with Joel, unleashing the green-eyed monster in Oscar, whose jealousy-triggered recklessness threatens not just his friends, but also the innocent people of Korea.

The tone is that of a typical “mumblecore” drama until the giant monsters show up. Thankfully, an engaging turn from Hathaway is more than enough to keep you interested up until this point. Her Gloria is an instantly identifiable character, someone who wants to have fun. Through no fault of her own, she ends up being surrounded by all manner of weak men. The weakest, and most contemptible, is Oscar and Jason Sudeikis does a wonderful job in capturing the initially understandable hurt of a spurned man that quickly escalates into the vile jealousy of a controlling misogynist.

Oscar is the ultimate “nice guy”, painting himself as a victim when in reality he is just too immature to handle a grown woman and a genuine “just friends” relationship. He uses his physical strength and robotic alter-ego to threaten Gloria, telling her he will destroy Seoul unless she stays with him. 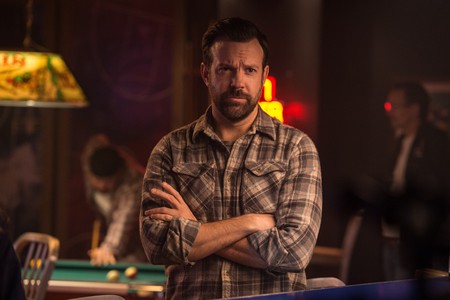 Jason Sudeikis as the green-eyed monster in 'Colossal' | © Entertainment Films

Writer and director Nacho Vigalondo does well with a tight and efficient script to not point the finger at the innocent woman in the mix. Instead, the men in Gloria’s life all play their part in highlighting the real monsters most women face in real life.

Tim, played by Beauty and the Beast‘s Dan Stevens, comes back on the scene in a desperate attempt to win back his ex, having spurned her in her hour of need. Realising his error, he rushes to her side, but not before he again tries to reassert his perceived superiority over Gloria.

In the end, Gloria has to battle all manner of monsters. Her Kaiju alter-ego has to protect innocent civilians and she has to fend off the increasingly violent and irrational male egos in her own life. The giant lizards and robots are really just a McGuffin in many ways, the real fight is a far more down-to-earth one and it’s one Hathaway gleefully takes on throughout the course of the movie.

Colossal is released in the UK on 19 May