An Introduction To The Specials In 10 Songs 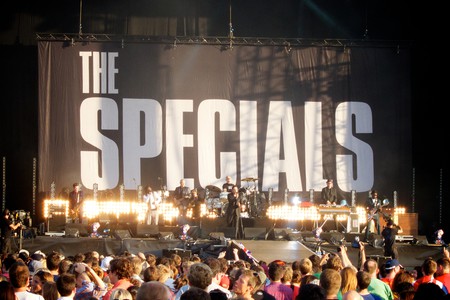 Going into the 1980s, social conditions in England were tense, to say the least. The country had been on a long conservative streak, and the times were seemingly not about to change any time soon. However, there were still those few voices that refused to give up yelling their beliefs at the man until they were heard all around the world, and The Specials were one of those collective voices. In practically total opposition to the sociopolitical conservatism of their homeland, The Specials featured a racially diverse and gender-friendly lineup, spearheading the two-tone ska movement of the late 70s and early 80s that eventually gave way to the socially progressive and liberal ethos of punk. Without the musical and political impact of The Specials, it’s hard to say where progressive politics and the music would be today, so here are ten songs that showcase the band’s spirited vigor.

Enjoy Yourself (It’s Later Than You Think)

For all of its raucous, roadhouse-inspired guitar noodling and organ buzzing, this song carries a weightier message than one might assume from such a sound. The Specials call for self-enjoyment not just for the sake of it; ‘the years go by as quickly as you wink,’ so why not live to the fullest? Quite the opposing message to the hyper-homogenizing cultural sphere of England at the time.

The Specials always had a penchant for wrapping up their sharp politics in catchy, upbeat songs. Not the case with ‘Man at C&A.’ The song grinds along creepily with a kind of mood similar to that of a haunted house, generating the most accurate atmosphere to that of a nuclear strike (a terrifyingly relevant concept during the time of this song’s release and even today) that ska can possibly muster. Not all guitar upstrokes are happy ones, after all.

A Message to You, Rudy

The lead of the eponymous debut album. Hard to believe this sound came to define generations of ska, reggae and punk bands and continues to pave the way for these genres even now. The faux-polka intro immediately draws the song into a playful place, the best method for glossing over the message of standing against the skyrocketing of racially-charged incarceration in the Western world. No song of theirs better displays their masterful skill at making even the most controversial and frustrated of social activism sound like a dance party.

How ingenious is it to make a song fit for a dancehall all about the pointlessness of nightlife culture and chasing after a false promise? In between the wildly engrossing trombone and trumpet soloing, Terry Hall yells out the helplessness of living life in the night club: ‘Is this the in place to be? What am I doing here?’ Even more societal commentary comes into the fold in verse two with ‘I don’t work, ’cause I don’t have to, there’s no work to do,’ an excellently succinct way to toss in the frustrations of class immobility, no?

This one, in a way, is like The Specials’ very own ‘kumbaya,’ but with twice as much wit and edge, of course. The relative lack of lyrical content is by no means indication of their lack of value. While Hall eloquently summarizes arbitrary racial division (‘just because you’re a black boy, just because you’re white, doesn’t mean you’ve got to hate him, doesn’t mean you’ve got to fight’), the dramatic, slow drawl of the instrumentation leaves plenty of room for the stark amount of lyrics to really sink in.

Any amount of listening to The Specials is sure to give away their universally antagonistic and progressive political agenda. Even in ‘Stupid Marriage,’ a silly song depicting a courtroom testimony of an ex-girlfriend’s smashed window, the band manages to poke fun at their own emotional impulses and the entire institution of marriage at the same time! ‘He thinks that she’ll be happy, when she’s hanging out the nappies. If that’s a happy marriage, I’d prefer to be unhappy.’ Kind of hard to take that any other way.

It’s Up To You

While their historic debut was fully produced by pop-maestro Elvis Costello, ‘It’s Up to You’ wears the Costello influence on its sleeve the most; which of course, is not a bad thing whatsoever. Even within the laid-back reggae drumming and organ pop, the guitar is constantly delivering awesome licks and riffing effortlessly under vocals that sound like they’ve been fed through a megaphone.

If ‘Man at C&A’ sounds spooky, ‘Gangsters’ is absolutely ghastly. It seems like every instrument, vocals included, has a hefty helping of reverb on them, giving the song that extra haunted-by-ghosts, Scooby Doo vibe. Nonetheless, the message is just brutal. For being written even before punk ever really started getting momentum, few punk songs equate globalized corporations to gangsters and a ruined future quite as intelligently as the gents in The Specials.

This song has possibly the most fleshed-out keyboard section of any of their early work, and the results are splendid. Interestingly, the song also carries the most obvious and straightforward lyrical message of the band (the entire chorus is ‘free Nelson Mandela’). No matter, an infectious song empowering progressive politics is always welcome!

Too Much Too Young

The political side of The Specials is one of the most important aspects of the band, but their simpler social messages are under-appreciated gems in themselves. Over the song’s uncharacteristic six minutes, the lyrics explore the consequences of rapidly running down the ‘right path’ of life, i.e. getting married, having children, settling down, and so on. Really, all it’s saying is: don’t rush the fun out of your life in the name of living up to any standard. A life lived is infinitely more valuable than any one lived by the book.