An Introduction To Aphex Twin In 10 Songs 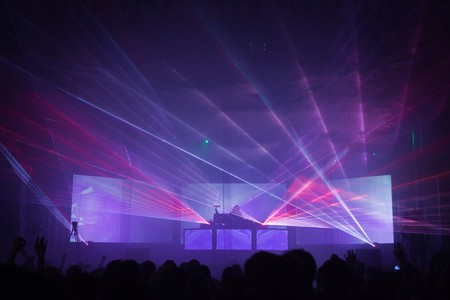 In the giant umbrella of electronic music, no musician is harder to pin down to a sound than UK-native Aphex Twin. Under alias and with plenty of experimentation, Aphex Twin (Richard D. James) has elevated synth and audio programming to the next level, with a catalogue over three decades dense behind him. From his early Selected Ambient Works 85-92 (1992) to his last full album production, Syro (2014), James has proved himself to be an innovative artist. Chances are you’ve seen his eerie grin somewhere around the Internet, but we profile 10 songs that showcase the gifted madness behind one of the eras greatest composers.

It’s really hard to start anywhere else but with one of the most recognized pieces out of his repertoire, and Windowlicker is definitely one of the most exposed of Aphex Twin’s works. Released as a single in March 1999, the song is erratic and highly danceable with layered vocals, glitchy drum samples and James’ own modulated voice. In conjunction with Chris Cunningham, he released this 10-minute (NSFW) music video complete with him dancing and his superimposed smirking grin on all the female dancers to rather disturbing effect. Attracting some controversy and positive critical reception for the song, he won NME’s Single of the Year Award in 1999, and released a statement for his win including, ‘Hope everyone has a totally boring New Year’s party, overdoses on everything and chokes on their own vomit on the bathroom floor…’ as a probable sentiment on large-scale music celebrity and his own desire to steer clear of it.

Traveling back in time, the debut studio album Selected Ambient Works 85-92 (1992) was a trailblazing work created off the early recordings of Aphex Twin’s beginnings, and refined into one cohesive album that changed the landscape of contemporary electronic/ambient experimental genres for musicians and critics alike. Xtal is one of the major takeaways from the album, and is filled with airy female vocal samples and ethereal drum beats, perfecting the ambient sound into something both free flowing and grounded enough to gain mainstream attention.

We Are The Music Makers

Another song off of his debut studio work, We Are the Music Makers follows the same album thread of simplicity combined with detailed drum and synth experimentation. ‘We are the music makers, and we are the dreamers of dreams’ is the only vocal line that appears in the song, and is a sample from the 1971 version of Willy Wonka and The Chocolate Factory – one of the few samples to grace the album along with some recorded parts of RoboCop, and The Thing films. A little heavier than Xtal with a prominent bass line that carries the piece forward, We Are the Music Makers is a subtle but impactful piece on the album and a fan-favorite for most who listen.

Shortly before Selected Ambient Works 85-92, Aphex Twin released a small EP titled Didgeridoo (1992), which contained four songs that would later be included on his Classics major works compilation. At the top of that song list was the similarly titled track Didgeridoo – an atmospheric but frantic song with a powerful and aggressive backing beat and pulsing ‘didgeridoo’ tones. What’s most surprising about the song is the fact that Aphex Twin never used any actual didgeridoo samples, opting to recreate the sound through tedious electronic engineering to achieve the right drone. Below is one of the few live versions of the song floating around, from Glastonbury 1997 (the track starts at about 30 seconds in).

A combination of James’ roots (he was born in Ireland and grew up in Cornwall, England), and a shout out to the musical genre in name, Cornish Acid is more rigorously acid and less ambient than the above entries. Off of the very literally self-titled album Richard D. James (1996), the song is less than three minutes long, but encapsulates the essence of Aphex Twin’s steps into a more digital and heavier space, and what largely defines the music he has made since. The album would go on to be included on top 90s album lists from publications like Pitchfork and Spin, and incorporates the signature smirk on its album cover. In regards to repetitive use of his face throughout his works Aphex Twin was quoted saying: ‘I did it because…the sort of unwritten rule was that can’t put your face on the sleeve. It has to be like a circuit board or something. Therefore I put my face on the sleeve. That’s why I originally did it. But then I got carried away.’

Classics (1994) was a compilation album consisting of floating works from places like the Didgeridoo EP, Xylem Tube EP, with a few other songs tied in. Dodeccaheedron appeared first on Xylem Tube, and reflects Aphex Twin’s more techno vibes. Dark, brash, and danceable, the song utilizes a glitchy and catchy beat with a rather sorrowful sounding electronic moan that fits perfectly, and yet stands out from, the minor key treble notes that flow throughout the song. As with most of Aphex Twin’s works, it has a way of completely disorienting you from what you know while enticing you to listen forward into unknown audio soundscapes.

Released as another single along with Windowlicker, the second track Equation is actually named ‘ΔMi−1 = −αΣn=1NDi[n][Σj∈C[i]Fji[n − 1] +Fexti[n−1]]’ for a complex mathematical problem. For obvious reasons, many have decided to informally call it ‘Formula’ as well, but the complexities behind its name accurately reflect the complex nature of the song as a whole. In what sounds like discord, and much more critically ‘nonsense’, is a layered amalgam of drums, modulated vocal samples, and the erratic tones that is what makes Aphex Twin. The song is as much an audio experience as a physical one, as your ears steadily try to keep up which the changing dynamics and textures. Aphex Twin has always pandered to the creepy and disturbing as much as he has to audio originality, but those sentiments are in literal full view in this track. When the song is visually translated by spectrogram, near the 5:30 mark James’ face appears in full, with that same smirk he got ‘carried away’ with. You are very much listening to Richard D. James, as his face directly enters your ears.

In one of his less critically hailed albums, Drukqs (2001) is in fact a huge album that really gets to showcase the compositional talent of Aphex Twin. With its use of physical instruments (piano, harmonium, and percussive instruments) that were computer controlled, along with his signature electronic overlays, he manages to combine the traditional with the techno for an exercise into the electro-acoustic space. While definitely less cryptic and questioning in comparison to his other works, there’s something a bit more personal about this album, like James is himself exploring something he hasn’t visited in a while. Avril 14th has become a major pop culture hit, being included in various television and movie works; and even sampled by Kanye West. Yet it is just a straightforward beautiful piano melody, softer and calmer than anything he created before. A first time listener would never pair this song with the rest of Aphex Twin’s discography, but the artistic value and its contrast in both technical sound and emotional resonance truly shows just how versatile and talented James is.

In 1994, Aphex Twin showcased another foray into ambient sounds with his album Selected Ambient Works Volume II. A follow-up to the first album bearing the same name, this was an exploration into Aphex Twin’s own lucid dreaming, as he would hear the sounds in his sleep and try to recreate them once he woke up. The songs have no direct names, only their designated number order in the album, and #3 stands out as a shining beacon of both ambient sound and complete song as the ambient meets with the repetitive and plain nature of structure. Where ambient might have the issue of being too free of form, of a hard to anchor feeling, #3 keeps you in its grasp with its melancholy melody and pensive abrupt ending.

After a long period of silence, as Aphex Twin is often known to do, Syro came out in September 2014 without much pomp and eight years after his last work Chosen Lords. Syro seems to be the culmination of a few decades worth of Aphex Twin’s own creativity, combining most elements of his ambient, glitch, and techno sounds into one 12-track album. While there’s a little bit for everyone on it, 180db_[130] sticks out as an identifier for the rest of the album. The heavy thumping drum sample enters alone, starting you on a trip into a layered synth line that itself is paired with its own down tuned notes. Still with catchy and danceable twists that his influencers Erik Satie and John Cage are less likely to do, Syro caught a Grammy win in 2015 for Best Dance/Electronic Album. If this list wasn’t enough Aphex Twin for you, check out any of the aliases that Aphex Twin releases music from (Power-Pill, The Tuss, Dice Man, etc.), or his newest EP the Cheetah EP, which came out last week.