An Interview With Sculptor Lorenzo Quinn

Lorenzo Quinn’s sculptures have been lauded by critics and art lovers alike for the past two decades, commissioned by the Vatican and the State of Qatar, and exhibited in countless galleries across the globe. Culture Trip met Lorenzo at Mayfair’s Halcyon Gallery to discuss his art, inspiration, and his views on the contemporary art scene. 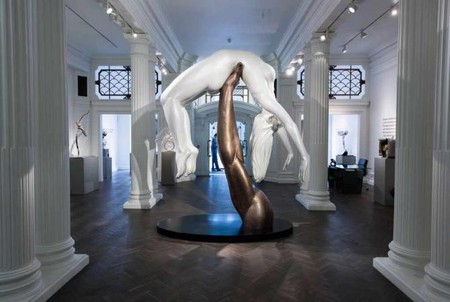 ‘Would You Catch Me If I Fall?’, Resin & Fibreglass. | © Lorenzo Quinn

You initially studied painting and even followed your father, Anthony Quinn, into the world of acting in the late 1980s. How did you finally decide on becoming a sculptor?

Back then my idol, and even the reason why I first became an artist, was Salvador Dalí. I don’t remember how exactly, but I got offered the part to play him in a movie about his life. I was a method actor, and when I became Dalí, I realized that I was not Dalí and that I could never do what he had done. I decided I had to find my own niche and be myself, which is how I started sculpting. With sculpture you feel like you’re a creator; it’s the closest a man can come to giving birth. The other thing is that sculpture is timeless. The artist will always be alive in the work.

How did you choose to specialize in figural sculptures?

I wanted to use the human figure so that people can connect with the artwork – that’s the main aim of my art. How many times do you hear people leave a gallery saying “I didn’t get it”? A lot of galleries play off the idea of elitism which I think is the worst thing they can do. I don’t want to create any barriers with my art; I want it to be as personal as it can be to people. I’d say that the vast majority of the people that buy my work never buy it purely for aesthetic reasons or investment purposes. They buy it because that piece means something to them.

How does your artistic process start?

The way I work is like writing a book. First I have to know what story I want to tell. Once I have an idea of what I want to talk about, I start writing phrases. The sculpture never begins with a visual image, but with words. Sometimes I’m inspired immediately and sometimes it takes a while. It’s something you can’t control, much like falling in love. I fall in love with every sculpture I make. There’s the initial courting of playing around with ideas before the proper relationship.

How long does it typically take to create a sculpture?

There are two aspects to the process: one is the actual physical production of the sculpture, and the other is the creative part. My last sculpture took me 49 years, because I had to be at this stage of my life to make it. It then usually takes between six months to two years to actually build a piece, which I do myself with the help of one colleague. I’m actually looking to hire a few more people to help in the studio because the demand is getting so high that I can’t do it all by myself. I’ve also started using 3-D printing which saves me up to two months. One of the most frustrating things for me is how long it takes to translate an idea into a physical sculpture. Once I have an image I like in my head, I wish it could be completed by tomorrow. 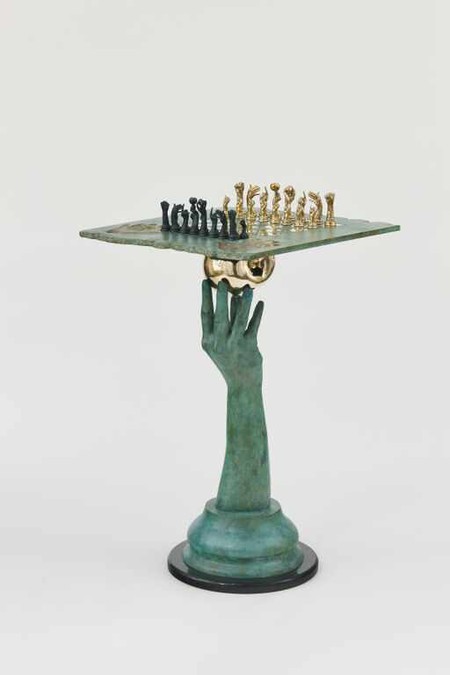 You’ve created some monumental sculptures such as Vroom Vroom (2011), the installation on Park Lane, and some very intricate pieces like your Chess Set. How does your approach change for such different styles?

I think that public art needs to be more personal than my other sculptures. I love for people to get up close to it and touch it. Public art belongs to the people; the sculptor doesn’t exist once it’s installed.

So would you say that your initial intention is of secondary importance?

Sometimes I create a plaque with writing or an explanation next to a sculpture, not so as to tell people what the piece is about, but to let them know what my interpretation of it was. But I like having conversations with viewers, and it’s fantastic to start having discussions with them and seeing the piece from their original perspectives.

You are Italian and American and you currently live in Spain. You exhibit all over the world from America to Europe, the Middle East and Asia. How important is it to you to create global art which appeals to such diverse cultures?

It’s absolutely important – I want my art to be universal. That’s why I create a lot of sculptures of hands, because they form a universal language. You can communicate so much just by moving your hands in certain ways. People can relate to it easily because it’s faceless, so they can see themselves reflected in the sculpture. But I don’t want to just be recognized as “the hand artist.” This show will be the first where the majority of pieces aren’t hands. You need to be able to reinvent your art otherwise you’ll be stuck with people’s expectations of you doing one thing for the rest of your career.

Can you give some examples of new styles that you’re working on or considering?

I want to have the option of making more symbolic art and to evolve as an artist. That’s why I’ve started to introduce the circle and the square to represent the female and male so that eventually I may just work with those two shapes and people will understand what I’m talking about. Just recently I’ve been thinking about a new piece I want to make called The Power of the Imagination; it’s going to be a very sensual piece, but without showing any part of the body. That said, I do love the human figure; its forms are spectacular and very complex. 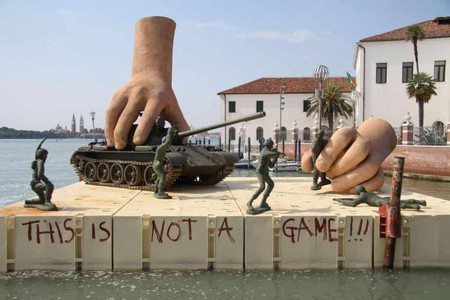 You’ve said that you’d like for your art to be timeless and enduring, but some of your works including This Is Not A Game, Home Sweet Home, and Love Me Tender, deal with more immediate socio-political themes such as war, domestic abuse and sexual exploitation. Do you feel that it’s your responsibility as an artist to teach and raise awareness of certain issues?

I usually make a statement piece to go with each exhibition. I made a sculpture a few years ago called Statistics which was about the media’s dehumanization of the Iraq War; I remade a graph of death tolls with sculpted hands to make viewers realize that there were real people behind the numbers. But I don’t want to presume that I’m that important that I can make a change, it’s just something that I feel I want to talk about and share. I don’t do it under any pretension.

Do you ever respond to or follow the works of any of your contemporaries?

Unfortunately, art isn’t how it used to be when there were movements. Now it’s very individualistic and everyone’s out there doing his or her own thing. So no, I don’t follow any particular artist. I’m still inspired by the old “grand masters,” Michelangelo, Bernini, Rodin and by great thinkers. But you only need to go on Instagram to see how many very creative people are out there. Art has definitely become more accessible.

Do you think that’s a positive thing?

It’s both good and bad. Some people think that anyone can be an artist – I don’t think that’s true. Art is a very subjective thing but I believe in having proper schooling and studying a range of techniques, otherwise your creativity is bound. There are some basic rules that need to be followed to create great art.

So what is your stance on contemporary art?

I personally don’t like a lot of it. It’s too simplistic. I get depressed when I go to a gallery and see a lot of stuff on the floor labeled as art. Art moves in cycles and I think this has been an important cycle in breaking certain taboos, but I’m not a fan of shock-art. You always have to bring something new to the creation. 90 years ago a red circle in the middle of the canvas meant something, but images produced like that today no longer have artistic value. But I believe that the public will start rejecting this kind of art, and will start demanding skillful artists again.