A Walk Around Birmingham, UK in 18 Perfect Instagrams 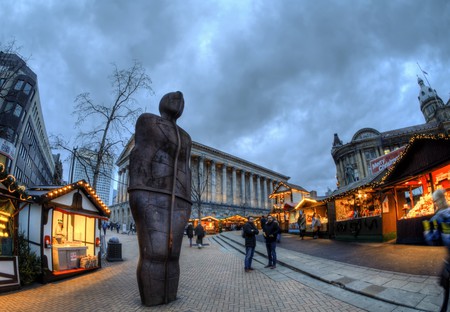 Birmingham is famed for having more miles of canals than Venice, making it one of the more picturesque cities in the UK to explore in the summer months. While the city may often get knocked back, we’ve rounded up a selection of some of the most impressive Instagrams which show off Birmingham in its true form; beautiful and unique.

Gas Street Basin is the epicentre of the region’s canal network, and it’s a thing of real beauty.

And in the summer, the nearby Brindleyplace area hosts regular sporting events and films on its outdoor big screen — complete with bean bags.

In spring you’ll want to check out the beautiful cherry blossom trees outside the Ikon Gallery — it really is a sight to behold.

Nearly 4 years of living in Birmingham, but I've finally seen the Ikon Gallery and its Cherry Blossoms at their peak – without a doubt worth the wait and unquestionably one of the most beautiful scenes in the city! Really glad to have finally caught it, albeit after half the city has already posted it to instagram 😂 #Winwithhoya

And once you’re done there, why not check out another of the city’s cultural offerings at the stunning Birmingham Museum & Art Gallery?

A grand entrance at BMAG

But if all this walking is a bit too much for you, you can relax in one of the city centre’s green spaces, such as Eastside City Park.

Don’t sit down for too long, though, Birmingham is one of the fastest growing cities in the UK, as the shiny New Street Station and Grand Central proves!

But it’s not all new builds!

There’s still life in the old dog yet.

Sunny day in Birmingham yesterday, helping out with graduations has been tiring but so so lovely ☀️ #birmingham

And if the bustle of the booming city centre is too much for you, why not hop on the number 50 bus to one of its leafy suburbs like Moseley? The south Birmingham village is packed with history and offers plentiful space to work, rest and play.

. Moseley Dovcote . Dates back to the late 1600s/early 1700s one of just 2 remnants of the Grevis family's original Moseley mansion . You can visit on certain weekends courtesy of the #moseleysociety 👏🏼 . #heritage on your doorstep . #moseley #birmingham #igersbirmingham #wealltakepictures #localhistory

Moseley Park and Pool is pretty ace too. I mean, just look at it…

Birmingham is not all walking and relaxing though. It’s also home to a number of music festivals like Made Birmingham in Digbeth, taking place on the last weekend of July each year.

Buzzing to hit @made_festival this weekend 🎉

And if you’re more in to food than music, Digbeth Dining Club have got you. The street food event takes place each Friday and Saturday on Lower Trinity Street.

While you’re in Digbeth, you’d be silly not to check out its wonderfully gritty street art in and around Brum’s creative hub, The Custard Factory.

And as far as things not-so-gritty go, Birmingham has an abundance of those, too. Take the Library of Birmingham’s interior, for example.

And as for its exterior; the Library’s secret garden offers picture perfect panoramic views of the city.

PHOTO OF THE DAY!! What a clever shot this is by @huggynbg, capturing the skyline in the reflection. This shot was taken during @igers_nuernberg's visit to Birmingham earlier this month. We'd strongly suggest looking at the hashtag for their visit, it's packed with really great photos: #nuernbergmeetsbirmingham #igersbirmingham #birmingham #igb_potd

But let’s be honest, a lot of people just come to Birmingham for some old fashioned shopping at its world class shopping centre, the Bullring.

But who’s to say a shopping centre can’t be picturesque, too? Even on a dark and stormy afternoon…

While Birmingham might feel a little like a concrete jungle, it really offers so much more. Why not come and visit the UK’s second city for yourself?