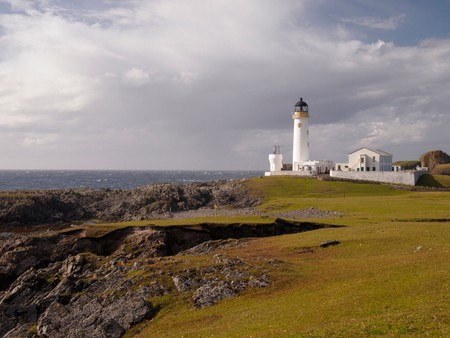 Fair Isle, Scotland is the most remote spot in the UK | © Andy Sutton / Alamy Stock Photo 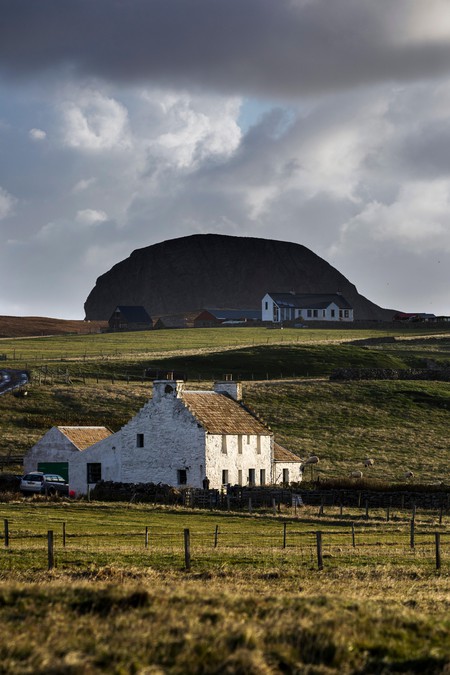 On Britain’s loneliest island, located in the Atlantic Ocean between Orkney and Shetland, the puffins outnumber the humans by roughly 100 to 1 | © David Chapman / Alamy Stock Photo

With a population approximately the same as France (around 67 million) crammed onto a landmass half its size, Britain may feel a little overcrowded at times.

But for the residents of Fair Isle, overpopulation is not a problem they need concern themselves with. Here, the puffins outnumber the humans by roughly 100 to 1.

Set in the middle of the North Atlantic, 38km (23mi) from Shetland and 43km (27mi) from Orkney, Fair Isle is as far away from civilisation as it’s possible to get in the British Isles. Measuring barely five kilometres across and two kilometres wide, the island is home to a tiny permanent population of just over 50 people. In fact, it’s the most remote inhabited place in the UK.

Until 1955, it was privately owned, but since then it’s been managed by the National Trust of Scotland. Buildings are few and far between: there’s just one shop, alongside a tiny school, a couple of churches, two lighthouses and a scattering of crofts spread out across the island’s treeless landscape. Incredibly, 24-hour power only arrived in 2018 thanks to the addition of two new wind turbines. Prior to that, electricity shut off every night between 11pm and 7am.

It feels remote in a way very few corners of the British Isles do. In fact, just getting there is half the adventure. 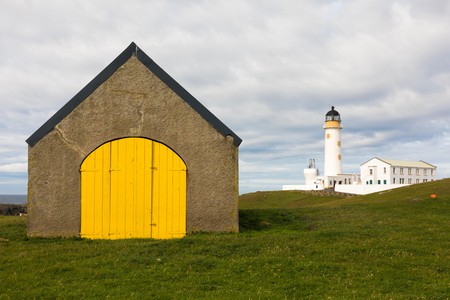 South Lighthouse, Fair Isle – in winter, it’s not unusual for the island to find itself cut off for several days by bad weather, sometimes even longer | © ap-photo / Alamy Stock Photo

The journey to Fair Isle

There are two ways to reach the island. The first involves a thrilling 20-minute hop aboard a tiny aeroplane from the mainland of Shetland – the kind of bumpy, heart-in-the-mouth flight where you sit knees-up behind the pilot and get to watch the controls as you come in to land.

Unfortunately, the unpredictable weather means flights are regularly cancelled without notice – which leaves the only other alternative, a notoriously rough crossing aboard the island’s ferry, the Good Shepherd IV.

The boat runs three times a week in summer, dropping to once a week in winter. The crossing usually takes between two and four hours, although fog, wind and choppy seas means it sometimes takes considerably longer. Most of the island’s supplies arrive by sea, so the ferry often carries some highly unusual cargo – from livestock and machinery to domestic appliances and even classic cars.

“The boat is a lifeline for the island,” explains Captain Ian Best, the Good Shepherd’s skipper. “Without it, we would struggle to keep things going here. So we’re out there in pretty much all weathers – wind, rain, hail, snow. It can get pretty lively at times. Lucky the old girl’s built to last, eh?” he adds, running a hand affectionately along the boat’s hull, before disappearing back into the wheelhouse. 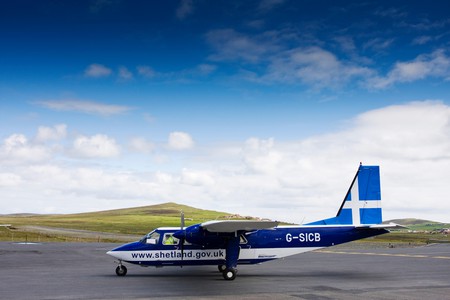 It’s a 20-minute flight from the Shetland mainland to Fair Isle, though the unpredictable weather means flights are regularly cancelled without notice | © blickwinkel / Alamy Stock Photo

Knit one, purl one

Even though most people would have a hard time pinpointing Fair Isle on a map, they’ll almost certainly know its name thanks to its world-famous knitting pattern. Incorporating bright bands of colour with symmetrical geometric shapes, the distinctive Fair Isle design dates back hundreds of years. It shares many similarities with traditional Scandinavian knitting patterns, a legacy of the maritime trade on which the island once relied.

Traditionally, clothing was knitted by the island’s women for their husbands and children. Garments were made entirely by hand using wool from the island’s sheep; the yarn offers both warmth and natural water repellency, making it ideal for the cold, wet Scottish weather. One jumper would have taken several days to finish, but these days most knitters use electric hand looms to cut down production time. Even so, they’re a labour that requires many hours’ work. As such, they command hefty price-tags – from around £200 for a standard jumper, up to £1000 or more for custom designs.

Traditional Fair Isle knitwear can be bought on the island from local craftspeople including Kathy Coull and the Fair Isle Textile Workshop, and Elizabeth Riddiford’s Exclusively Fair Isle. Knitters such as Mati Ventrillon and Hollie Shaw offer more contemporary designs.

“It feels amazing to be part of this incredible island tradition,” Hollie explains, as she works behind her loom on her latest jumper design. “These skills are part of our heritage, and it’s so important that we hold onto them. Every time I knit a jumper, I feel a connection to the island’s past – and hopefully, in my own way, I’m doing a little bit to help ensure its future, too.” 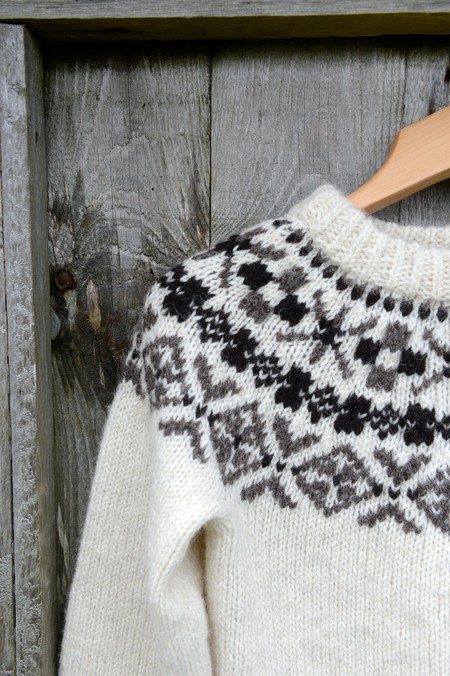 Apart from knitting, Fair Isle is also famous for birdwatching. The island’s isolated location in the North Atlantic makes it a waypoint for many migrating bird species, including puffins (known as tammie nories in the local Shetland dialect), razorbills (wilkies), arctic skuas (skooty aalans) and great skuas (bonxies), which have an unpleasant habit of dive-bombing anyone who approaches their nests.

Throughout the year, nature wardens on the island monitor bird populations and conduct species counts, providing a valuable resource for documenting seasonal changes and migration patterns. In fact, the island has one of the world’s oldest ornithological records, stretching back more than seven decades.

Sadly, the island’s bird observatory (which also doubled as its only hotel) burned down in a major fire in 2018, and is currently in the process of being rebuilt. It’s hoped that it will be up and running again in the early 2020s. 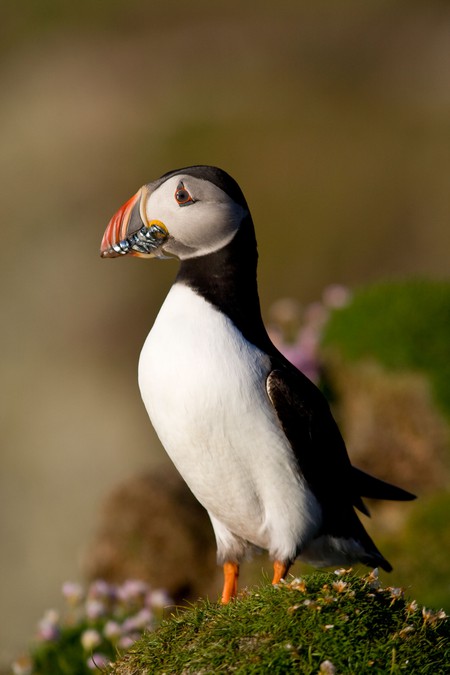 With its black cliffs, stark moors and deserted coves, there’s no doubt that the island has a stark beauty, but it’s certainly not an easy place to live. In winter, it’s not unusual for the island to find itself cut off for several days by bad weather, sometimes even longer.

Amazingly, however, despite its remote location, humans have been living on Fair Isle for at least 5,000 years. Archaeological digs have revealed many artefacts dating back to Neolithic times, along with traces of ancient oval stone houses and stone dykes used to divide up the land.

There are also two important sites dating from the Bronze Age, including a hillfort at Landberg and a small settlement at Kirki Geo. Later, the island was settled by Vikings, who called it Fridarey – the island of peace. Many of the island’s place names stem from Old Norse. 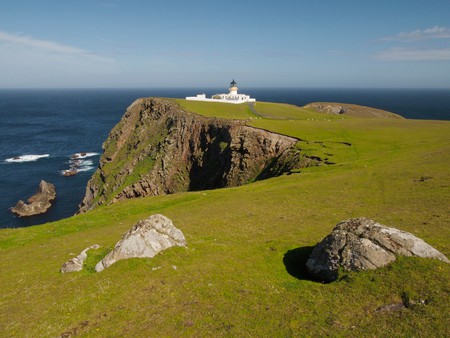 North lighthouse, Fair Isle – the island was once settled by Vikings, who called it Fridarey: the island of peace | © Andy Sutton / Alamy Stock Photo

It was the Vikings who probably also introduced crofting to the island. This ancient system of land management has been practised across the highlands and islands of Scotland for many centuries. Traditionally, each islander is entitled to their own smallholding, where they can farm, raise livestock and grow vegetables. It’s a system that’s still in use today.

Thanks to the small number of crofts available on Fair Isle, they are highly sought after. On the rare occasion one becomes available, the island receives hundreds of applications for the vacancy. Would-be islanders are asked to undergo a lengthy selection process: applicants with special skills such as teaching, nursing and engineering are preferred, as are people with young families (the island’s tiny school has a constant struggle to find enough children to remain open).

Self-reliance, resilience and a willingness to participate in island life are all essential qualities for survival. Nearly all the islanders supplement their crofting income with multiple jobs (for example, Fair Isle’s postmistress also runs the shop, works at the airport and volunteers part-time as a retained firefighter).

But for many of Fair Isle’s inhabitants, the island’s isolation is exactly what draws them here in the first place. Living in such a remote place fosters a close-knit sense of community and neighbourliness; when the bird observatory burnt down, half the island turned out to help.

“It’s always been like that on Fair Isle,” explains minister John Best. Now in his eighties, he’s the island’s oldest resident, having lived on the island for more than forty years. Though semi-retired, he still administers the weekly sermon, while also finding time to indulge his lifelong passion: painting.

“Living in a place like this, you have to work together,” he says. “There’s no room to fall out with people or bear grudges. It’s like one big family, really: you squabble sometimes, of course, but ultimately you rely on each other to survive. Living here has taught me the value of community. Personally, I think there are lessons about life here that the rest of Britain would do well to follow.” 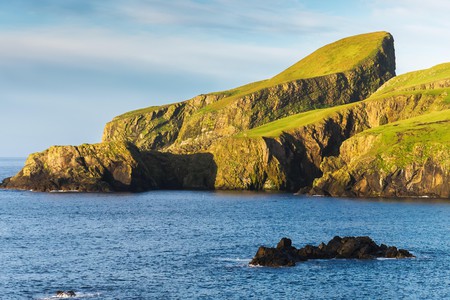