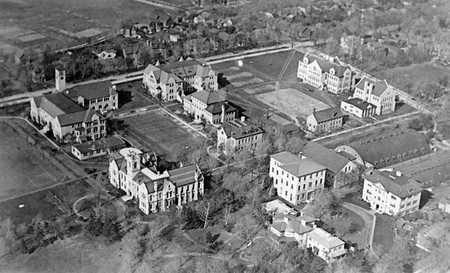 Queen's University from the air in 1919 | © Bishop Barker Co./WikiCommons

Queen’s University Belfast, a Russell Group University in the heart of the city, was originally founded in 1845 as Queen’s College, eventually becoming a university in 1908. Today, the university is a major part of Northern Ireland, and exists as a centre of international-standard education and research.

Founded by Queen Victoria, Queen’s University Belfast has been providing third-level education for over 150 years, originally designed as a non-denominational alternative to Trinity College Dublin. Queen’s opened in 1849, having been founded in 1845, when the first few students had the chance to enter the grand university building designed by Charles Lanyon. The university now consists of over 300 buildings, but the Lanyon building remains the main building and the symbol of Queen’s University Belfast. Standing tall in the heart of Belfast, this institution has seen the city through conflicts both local and international.

The site for the magnificent Lanyon building was chosen in the south of the quickly expanding city, near the Botanic Gardens which had been completed 1841. County Surveyor of Antrim and established architect, Charles Lanyon, was selected as the designer of the new university.

Lanyon’s design reflects the culture of that time, using associations with historical architecture to command instant status and authority. The glorious Northern Irish climate quickly weathered the sandstone and soft red brick, creating a timeless appearance, and the long front elevation suggested a certain prestige which reflected the goals of this new establishment. With this in mind, this is easily one of the most beautiful buildings in Belfast.

The cost of building ended up coming to 30 per cent over the budget, forcing Lanyon to cut costs by removing some fine details. Records of these can be found on the beautiful original plans, most of which were drawn up by William Henry Lynn, Lanyon’s assistant who ended up leaving a mark on the University in his own way over the years.

Victoria and Albert made their first and only visit to Belfast in August 1849, when the College was nearly completed, and it opened at last that December.

The main entrance hall, now known as the ‘Black and White’ hall, was originally meant to feature a grand gothic door and window on one wall, which would lead to an examination hall extruding into the quadrangle. This hall was one of the first parts to be cut in the name of saving money.

A simpler window was instead designed, which is now filled with a great stained-glass pane. The window was designed by J E Nuttgens in 1939, but wasn’t included until the Second World War ended. It features an inscription which reads: ‘This window is dedicated to the memory of all Queensmen and Queenswomen who having served their generation have fallen asleep. Their epitaph is graven not on stone but on the hearts of men.’

The great centrepiece of this hall is Pio Fedi’s statue of Galileo, which was added to the Black and White hall during a restoration of the nearby Great Hall in 2001. 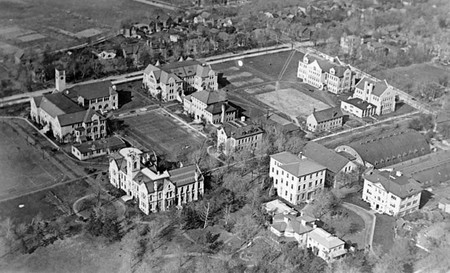 Queen’s University from the air in 1919 | © Bishop Barker Co./WikiCommons

As the University grew, the northern side of the Lanyon building, originally containing a museum and a number of lecture rooms, was slowly transformed for use by administrative services. An opportunity to reform this north wing came in 1975, when the new Administration building was built on the eastern side of the quad. Robert McKinstry carried out this project in 1986, creating a reception room, known as the Canada Room, and a new Council Chamber on the first floor.

Across the gallery from the Canada Room and Council Chamber lies the Naughton Gallery, another beautiful addition which came as a result of the restoration project in 2001. The gallery consists of one long, narrow room, which originally only contained service and storage areas. The room now makes a wonderfully bright, neat little gallery which allows visitors to see both touring exhibitions and the University’s art collection.

Now in its 15th year, The Naughton Gallery can host up to eight exhibitions each year and is also involved in the co-ordination of commissions of new art works for the University. Consisting of purchases, bequests and gifts which have been collected since the foundation of the University in 1845, QUB’s extensive art collection includes prints, paintings, works on paper, furniture, sculpture, silver and metalwork. The collection also features a beautiful hang of more than 40 portraits, which can be found in the Great Hall. 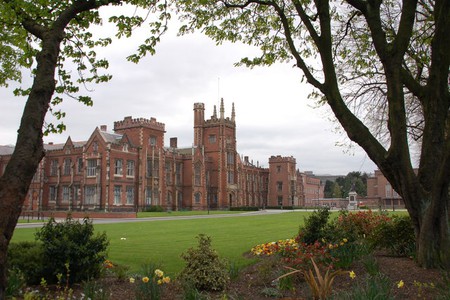 The Lanyon building is surrounded on two sides by grassy areas — the front lawn to the west and the quadrangle to the east.

These grassy areas even play a role in the history of World War 2. During the war, Northern Ireland contributed significantly to the war effort in terms of agriculture, among other contributions. This effort led to the conversion of a number of unexpected locations to allotments to allow for the cultivation of crops. One such space was the front lawn of Queen’s University Belfast — so just picture that next time you see it!

The product of a century of construction work, the quadrangle central is an open space at the heart of the University, lying just through the Black and White hall of the Lanyon building. From this space, you can see the year ‘1848’ marked on a small part of the Lanyon’s south wing, the only remaining part of the building which was in the original design.

The most dramatically designed room in the University, the Great Hall, was inspired by the medieval great halls found in the colleges of Oxbridge, though many of the more intricate features fell victim, once again, to budget cuts. These features were added once more during the Great Hall restoration project, so the medieval designs you see today are actually more recent than much of the University.

With all of this history going into the making of this fabulous structure, it’s not a wonder this Hogwarts lookalike tends to catch the eye of every passing visitor. 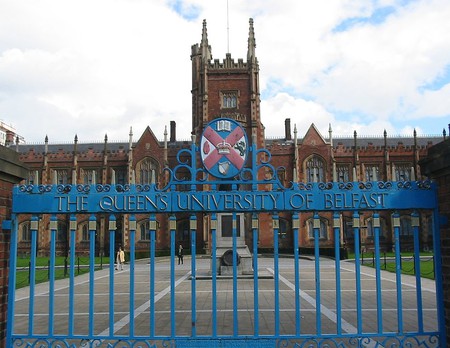