'A Quiet Place' Review: Time to Shout About One of the Best Horror Films of the Decade 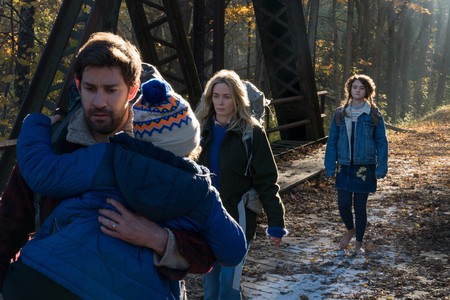 With plenty of pre-release hype and a smattering of enthusiastic reviews from SXSW earlier this year, A Quiet Place is certainly making plenty of noise in the film world. The confidence in the movie is justified, as John Krasinski’s film, which he directs and stars in, is worth shouting about. 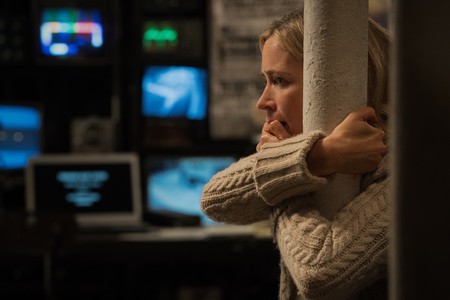 We’re all familiar with the tagline from Ridley Scott’s Alien (1979) that proclaims ‘In space no one can hear you scream’ – a deliberate comment on one of the most prevalent aspects of horror films, and one that is at the forefront of your mind when watching A Quiet Place.

Imagine a world where screaming, or making any noise at all, would lead to almost certain death. This world, as we see in the movie, is populated by creatures that are the cause of this misery. Opening in media res, we are several weeks into the epidemic that has plagued the planet and are introduced to a family led by Evelyn (Emily Blunt) and Lee (John Krasinski) in a desolated town. They communicate with their young children Regan and Marcus in complete silence and via hand signals.

Barefoot, the family leave what we assume has been their temporary home in a supermarket and head off out of town. It’s here, several minutes into the film, that we get our first look at the terrifying creatures that have overrun the Earth. Krasinski, wisely, opts to show us the attackers in detail from the beginning. We don’t hide in the shadows or get a glimpse in the background. This makes it clear that seeing in this world means little compared to hearing.

On the surface, this is a high-concept idea that could have been played out as an ultra-serious chiller. The other obvious option would have been to go for a bombastically bloody slasher, playing on the creature design. If this were a typical studio movie, this second approach might be the one we would have ended up with, and to be brutally honest, it would have probably fallen by the wayside. That’s not to say there is a lack of energy or drive, quite the opposite actually.

From the excellent opening sequence, which perfectly sets up the premise and an uneasy tone, Krasinski sets up a relentless narrative that is reminiscent of the standout genre hit Life from last year. The tragedy we see early on also ramps up the jeopardy to almost unbearable levels, something that is added to soon after when we join the Abbott family several months on from their introduction with Evelyn now pregnant with another child.

The arrival of the baby poses the question of how the characters will keep a newborn quiet and out of earshot of the creatures. This is in contrast to how well the other children have adapted to their situation, in particular the feisty Regan (Millicent Simmonds) who is a constant source of inspiration. 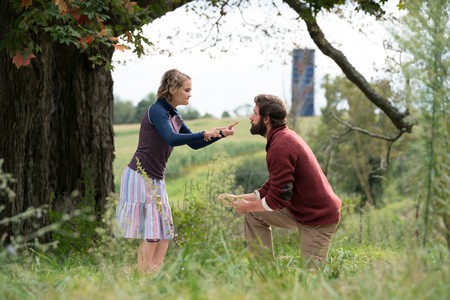 What’s particularly pleasing about A Quiet Place, aside from the genuine jump scares it offers up regularly, is the intelligence with which everyone has clearly approached this film. Krasinski gives his characters ample opportunity to shine by the smart choices they make throughout the movie. The performances from all involved are elevated to extraordinary levels by the direction and the ingenious premise.

There is room for a series of ‘Checkov’s Gun’ set-ups, all of which a paid off in various ways to great effect. These go beyond usual foreshadowing, as we see resolution inching towards the protagonists we become fully involved in their struggles. The whiteboard of questions and information Lee assembles in his basement show us his thought processes in believable detail, all of which add up to the climactic scenes.

The sound design is also superior to any other recent example we can think of. The plot makes this a necessity, but requirements don’t always equal quality in other movies. Blunt, in particular has to portray silence in extreme situations and makes great use of this by infusing various moments with great emotional impact. The real-life couple of Blunt and Krasinski have a warm onscreen chemistry, and the younger actors playing their kids only add to this. 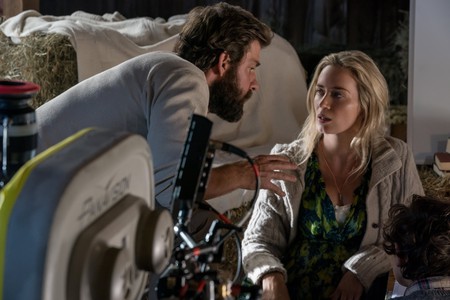 You could argue that there isn’t the same level of social commentary here as there is in Get Out (2017), but sometimes a great horror film can stand on its own merits. All things considered, A Quiet Place is a better film than Jordan Peele’s Oscar-nominee.

A Quiet Place is on general release from April 5