Quirky British Hotels You Have To See

The United Kingdom has seen an increase in more unusual and eccentric forms of accommodation available to travellers. From converted water towers, to upcycled double decker buses, to revitalised railway carriages, here are nine of the quirkiest British hotels you have to check into.

Taking upcycling to a new level is the Big Green Bus near Chiddingly. While not a hotel per se, this self-service lodging is worth a mention. What was once a 1982 West Midlands metro bus that serviced Coventry and Birmingham is now a three bedroom lodging that can sleep six people. What’s more, there is a full sized kitchen, downstairs lounge, log burner and convertible dining area all on board. The front of the top deck is the “chill out” zone, where guests can relax reading a book or sip on a glass of local wine (which is provided by the hosts on arrival). The remodelling of this bus is an achievement, with several of the bus’s original features converted to give them a new lease on life. The refurbishment of the bus took two years to complete, and was largely carried out by its owner, a qualified carpenter.

Built in 1892 for the Prince of Wales, Edward VII, this former railway station in Petworth has been given a new lease of life, as a luxurious and unusual hotel. Named The Old Railway Station, this hotel has utilised both the station and the railway cars to create unique accommodation with a vintage feel. There are four Pullman Carriages to stay in, each providing eight suites revamped with style and flair. New features such as ensuite bathrooms have been installed, bringing the carriages into the modern era. However, the decoration of the hotel still retains the original features and splendour that the station and carriages once had. The hotel is also located close to Goodwood Racecourse, Cowdray Park, and Petworth town itself. While staying at this intriguing hotel, their afternoon tea is a must try. Their cream teas are renowned, and add to the refined atmosphere of this charming abode. A stay at The Old Railway Stations guarantees to be an experience to remember.

Bringing the unique aesthetic style and lifestyle of South America to Penrith is the Llamas Pyjamas B&B. This themed boutique accommodation has been decorated to transport visitors to the heart of Peru, with Inca– and Aztec-styled rooms. There is also a quaint cottage for a quiet retreat. The Bed and Breakfast provides unmatched views of the north lake land countryside. They also provide visitors with their own llama. Yes, this unique hotel has 18 of their own llamas as part of their llama trek centre. Visitors who like the outdoors can explore the local lake lands together with their llama. There is also a café located next door, known as the Llama Karma Kafe, which carries the same Peruvian theme, and where diners can enjoy their tea alongside a furry resident. The Llamas Pyjamas is a must-stay for lovers of animals and the outdoors.

The Witchery by the Castle | Edinburgh

Eccentric, theatrical and highly memorable, The Witchery By The Castle located in the heart of Edinburgh must be seen to be believed. With lavishly decorated rooms, award-winning food and a decadent atmosphere, The Witchery has a unique personality that charms every visitor that stays there. Guests can sleep in four-poster beds in luxuriously designed rooms filled with drapery, tapestries and antique furniture, making them a haven for hedonists. The ensuite bathrooms include roll-top baths for two for an added touch of luxury. The hotel provides nine suites that are almost like stepping onto the extravagant set of a gothic film. The hotel’s restaurant is also a key talking point, with sumptuous and exceptional dishes served up every night. It is no surprise that The Witchery boasts a celebrity clientele and is one the most prestigious places in the city. The Witchery is the brainchild of owner James Thomson, who was awarded an OBE in 2005 for Service Hospitality and Scottish Tourism. With countless awards and accolades, guests at The Witchery will be left spellbound. 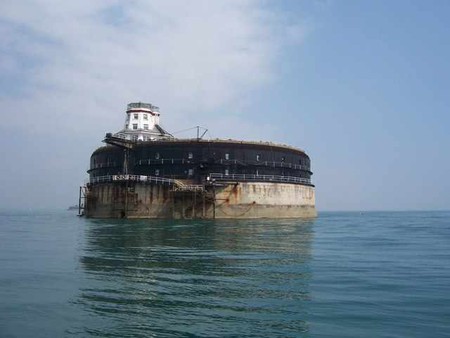 Perhaps one of the most remote hotels in Britain is the newly renovated No Man’s Fort. Constructed between 1867 and 1880 in the Solent as a protective fort for Portsmouth, No Man’s Fort provides guests with the ultimate private and secluded experience. There is an indoor swimming pool, a hot tub on the roof, a spa on the fort. Visitors arrive by boat or by helicopter, where 22 luxurious guest rooms await them. Each room is decorated in a nautical theme to reflect the hotel’s setting. Guests can unwind while sipping on a glass of wine on an enormous deck chair, or taking in the spectacular 360-degree views from the top of the fort’s lighthouse, or by hitting biodegradable golf balls straight into the Solent from the fort’s very own green. Doctor Who fanatics may recognise the hotel from the 1972 Doctor Who serial The Sea Devils, as the fort was used as a location for many scenes. Although on the pricier side, a stay in No Man’s Fort is an experience of a lifetime.

Boasting itself as Britain’s most “rock and roll hotel” is The Pelirocco Hotel in Brighton. Each of its 19 rooms is individually themed to reflect a style of music, from indie to rockabilly. Vinyl records, disco balls and rock memorabilia are dotted throughout the hotel and rooms. Every musical genre and style is catered for and referenced in this quirky lodging, making it an unusual musical hall of fame. The hotel is housed in two Regency townhouses located a stone’s throw from the seafront, and it opened its door as a hotel in 2000. There is a spa in The Pelirocco for guests who want to unwind, while regular gigs and events in the art deco-style bar will keep night owls going all through the night. This tongue-in-cheek hotel is a unique and eccentric part of Brighton.

Escape to the countryside and the sky of Devon in the Sunridge Tree House. This is no ordinary treehouse: the interior is contemporary and consists of two large bedrooms, one ensuite, both with HD TVs. The bathroom includes a free standing bath which adds to the treehouse’s level of luxury. There is also a modern German kitchen and an ambient dining area which provides spectacular views of the surrounding woodland. There is a private fishing lake nearby for that added touch of nature. Guests can soak up the remote surroundings on the deck which floats about the treetops and woodland floor below. Throughout the treehouse, there are modern touches – downstairs (yes, this treehouse has two floors!) guests can enjoy a private 3D cinema and games room. Every modern comfort is available, from a HD projector to a state-of-the-art games console. Whether it is a romantic getaway for a family retreat, the Sunridge Tree House is an indulgent escape.

Situated just a short distance from the centre of St Mary’s is the Star Castle Hotel. Its coastal location on the island means guests have unparalleled views of the archipelago. Built in 1593, this 16th century castle has a wide variety of rooms, both in the castle, and in the adjacent country cottage garden. Visitors can unwind while strolling through the four acres of secluded garden. The hotel also boasts an indoor swimming pool, complementary golf for all their guests, a tennis court, and courtesy transport. Their own boatman will bring you island-hopping as you explore the hotel’s spectacular surroundings. Furthermore, the hotel’s two restaurants serve award-winning gourmet food. The Star Castle hotel is ideal for special occasions and for memorable retreats. 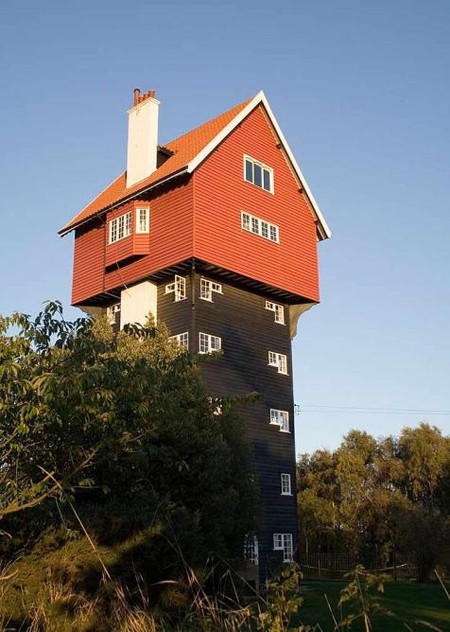 House in the Clouds | © Andrew Dunn/WikiCommons

House in the Clouds | Thorpeness

Spanning over five floors, this is perhaps the most original and unusual accommodation options in Thorpeness. Named the House in the Clouds, this 1923 former water tower is now a five bedroom self-service lodging. The water tower originally received water from Thorpeness Windmill. However, its design was unusual in that the water tank at the top was disguised and designed to appear as a weather boarded building perched on top of the tower. The tower ceased to function in 1977, and the water tank was removed in 1979. The quirky building sitting on top of the tower was then converted into a house. This listed building stands at 70 feet and will provide guests with ample exercise as they climb the 68 steps from bottom to top. Besides its numerous bedrooms, there is also a drawing room, dining room and modern kitchen for guests to utilise. The room at the top of the tower gives impressive views of Suffolk, the Thorpeness Golf Course and the nearby Meare.