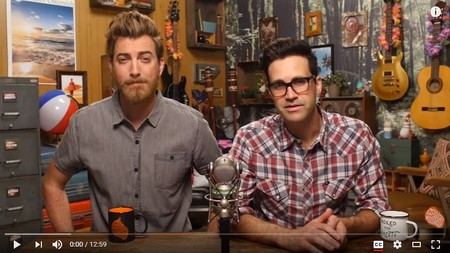 In our digital age, social media has become this global phenomenon that can both serve as a pure pastime or as a stable job. Even though many people don’t believe that social media can become someone’s full-time career, a lot of people prove them wrong. Here are seven people who quit their office jobs to work exclusively through social media.

You may know them now as the hosts of the hit YouTube show Good Mythical Morning, but being stars on the social media platform was not their first idea of a job. Before creating what is now one of the most popular channels on YouTube, Rhett worked as a civil engineer for Black & Veatch and Link worked as an industrial engineer for IBM. However, after a few years, they decided to quit and follow up on their blood oath as youngsters to ‘do something together someday’. Now they are an internet sensation, with over 12 million subscribers on their main channel alone, as well as a successful podcast and a few albums. They are also ranked at 35 on the top 100 YouTube channels list.

Eelco Roos was an IT specialist at IBM Amsterdam, who’d always enjoyed photography. Initially sceptical of Instagram, he begun to share photographs of his daily commutes, slowly racking up a steady following on the social media app. Soon, Roos started earning enough money through marketing campaigns, and after ten years of working at IBM, he decided to quit and pursue his passion for photography full-time. He has now over 452,ooo followers, and continues to get his income from online campaigns with tourism agencies and brands.

Taking it all in before I fly back home. Corsica has been amazing, with the definite highlight being Col de Bavella. #broonarock #visitcorsica #franceFR @visitcorsica

Allan Edward Hinton always enjoyed traveling, but his marketing job didn’t allow him the freedom to do so often. In order to gain a ‘decent perspective on life’ he earned a good amount of money, quit his job and became an Instagram photographer, quickly becoming a star after posting beautiful images of his travels, which helped him land paid photography jobs. He has since traveled to many countries in South America, Europe, and Southeast Asia. While still not financially stable, Hinton states that he is happier than he’s ever been before and wouldn’t want to go back to his job.

Dream mountain cabin! . After a hectic schedule this past week I think I found the absolute perfect and most cosy place to recharge some batteries before I head on to Milan. 😍 . #thedolomighty

Lita used to work at an advertising firm and was not happy with her life. After a breakup, her health began to suffer, so she decided to turn her life around. Lewis started going to the gym and eating healthy, recording her transformation on Instagram. In the course of a year, she had managed to acquire 60,000 followers. She then decided to quit her job, work towards her personal trainer degree and becoming a Fitspo star. She has since gained over 400,ooo followers, launched her own apparel brand and developed a reality TV show.

Right after graduating, Katie Rodgers was able to secure a job as an apparel designer at Reebok. In her spare time, she dedicated herself to her blog PaperFashion, where she would paint and illustrate fashion gowns. However, it was only when she transferred her work over to Instagram that she started getting noticed by fashion magazines and designers. As they started to shine more of a spotlight on her work, she quit her job and dedicated her life to her watercolor art. Katie has now over 677,000 followers on Instagram and is well known in the fashion world.

Painting in the snow this time last year with @valentina_kova at the @floatingfarmhouse. Portrait by @vlasta_pilot

Jon Paul Piques started out his career as a business insurance agent with a six-figure salary. At first only making and posting videos on social media as a hobby, he started to realise that he had a bigger influence through social media than through his job, and decided to work on it full-time. He has now acquired over 11 million combined followers on his social media platforms, and is one of the top 10 content creators on Facebook.

Leslie’s transition might be the most unusual one out of the bunch. She worked at a record label as director of new media/assistant manager. However, once she became ‘mom’ to Doug the Pug in 2012, she slowly begun to realise, through occasional Instagram posts, that he was very popular on social media. However, as her friends got a bit frustrated that her personal account mainly consisted of dog photos, Leslie decided to create an account just for her pup. Doug the Pug now has over five million likes on Facebook and 2.6 million followers on Instagram, and (thanks to Leslie) is a New York times best-selling author.