6 Constructed Languages Made for Fiction 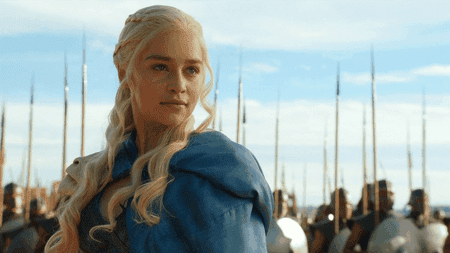 You may be familiar with some of the constructed languages around the world used in day-to-day life, but there are also dialects built from scratch that pop up in some of the most popular films and TV shows of all time. Here are six of the best-known examples.

Who, when and why: The official tongue of the warrior race seen in Star Trek. The iconic science fiction franchise debuted in 1966, but the Klingon language did not fully crystallise until 1984 with the movie Star Trek III: The Search For Spock, when it was fully crafted to be used as dialogue at the behest of writer-director Leonard Nimoy and Harve Bennett, the co-writer and producer. Prior to that, the sound and feel of the language was reportedly suggested by Scotty himself, actor James Doohan, and producer Jon Povill on 1979’s Star Trek: The Motion Picture. It became one of the first examples of a viral meme in pop culture: Trek fans learned the language and began speaking it at conventions while snippets of the phrase would show up in other popular entertainment like South Park. Linguist Marc Okrand, who specialises in Native American languages, published The Klingon Dictionary in 1985. Key works by Shakespeare have been translated into the language, and in 2010, a Chicago theatre company staged a production of Charles Dickens’ A Christmas Carol recited entirely in Klingon.

Who, when and why: Few would have predicted that in April 2011, when HBO began screening Game Of Thrones, that it would become the biggest TV show in the world. A number of dialects were developed specifically for the show, spinning an entire linguistic culture from the small number of phrases used in George R. R. Martin’s original novels. In the Westeros universe, Valyrian occupies the same cultural space as Latin in medieval Europe – a tongue once used for learning and education among a nobility, but now no longer part of day-to-day speech. HBO recruited the services of noted linguist David J. Peterson to create the High Valyrian language used by, among others, the Mother of Dragons herself, Daenerys Targaryen.

Who, when and why: If Valyrian is Westeros’ Latin, then Dothraki is its Klingon. The language used by the nomadic warrior tribe was again created by David J. Peterson specifically for the show, and references a number of languages including Turkish, Russian and Swahili for its distinctive sound, synonymous with large men wearing eyeliner making threatening gestures. The language was specifically developed to make it easy for actors to learn and pronounce. Jason Momoa’s star-making turn as Khal Drogo in the show makes perfect use of the language’s gutsy, visceral inflection.

Who, when and why: For his watershed 1962 novel A Clockwork Orange, writer Anthony Burgess put together a hybrid of cockney rhyming slang and Russian-influenced English to better authenticate the mindset of Alex, the nihilist teenager who narrates the book. Burgess was himself a linguist and intended Nadsat (also the same name as Alex’s gang in the book) to be used in the vernacular as an oral form of communication rather than a written one. The dialect made its way into Stanley Kubrick’s iconic movie adaptation and is used in its mesmeric opening moments, as Malcolm McDowell glares into the camera while a voiceover utilises Nadsat vocabulary to set the scene

Who, when and why: There was probably no need to construct a dense extraterrestrial language for the baddies in 1984’s epic Macross: Do You Remember Love?, but its Japanese creators went ahead and made one anyway. What is especially notable about the use of this language in the film is that in the original Macross TV series, all Zentradi dialogue was automatically translated into Japanese, whereas in the feature film it is purposefully used as-is with subtitles for the audience, exactly like Klingon in Star Trek. The European-influenced tones of the Zentradi warrior race contribute greatly to the world-building of what is arguably anime’s best-loved space opera, and the language (complete with its own alphabet) was carried over into future instalments of the saga.

Who, when and why: Actor Edward James Olmos was given a small part as LAPD officer Gaff in Ridley Scott’s classic 1982 film, Blade Runner, with a role that amounted to mere minutes of screen time. However, he immersed himself in the part and was able to create an unforgettable turn thanks to reverse engineering his character from the ground up. Olmos was responsible not only for how Gaff dressed, but also how he spoke, and off his own back devised a mish-mash of European and Asian dialects (Hungarian, Japanese, and Spanish) designed to reflect the multicultural setting of Los Angeles in the year 2019. The language is referred to directly as Cityspeak by Harrison Ford’s Deckard in early cuts of the movie. Gaff is the only character to use Cityspeak in the film, and Olmos’ research and attention to detail at the time was so absolute that years later, Scott would cheerfully admit that, “Eddie drove me nuts.”