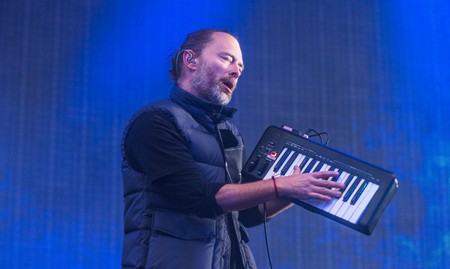 In the midst of celebrating the 20th anniversary of their album OK Computer and a controversial upcoming performance in Israel, Radiohead sat down with Rolling Stone for a cover story discussing the former.

However, there were plenty of tidbits that didn’t fit the cover’s narrative, and so Rolling Stone published a side piece featuring 19 fun facts about the band, ranging from their anxiety in regards to their Rock and Roll Hall of Fame eligibility to their very mixed feelings about performing “Creep” live again.

Featuring quotes from the band’s members and their longtime producer Nigel Godrich, here are our five favorite anecdotes from the article:

Jonny Greenwood: “When we were at school, we hated and distrusted anything that was successful on a large scale. We just associated it with bands that did guitar solos with big hair. It’s already such a preening, self-regarding profession. I’ve always hated guitar solos. There’s nothing worse than hearing someone cautiously going up and down the scales of their guitar. You can hear them thinking about what the next note should be, and then out it comes. It’s more interesting to write something that doesn’t outstay its welcome.”

2. Radiohead almost worked with Dr. Dre when recording Kid A.

Ed O’Brien: “It was sort of like a dream. I kept on saying, ‘Oh I’d love to work with Dr. Dre.’ I knew it would likely be shouted down or laughed at. Also, it might have been be a little bit forced. But at the time, in my head, it made perfect sense. The problem would have been finding modus operandi because Dre obviously works in a certain way. Could he have handled a rock band? Who knows? But it came from being a fan of N.W.A and his productions around that time.”

3. Radiohead is going to tour into their 70s… maybe.

Nigel Godrich: “That fucking James Bond movie threw us a massive curveball. It was a real waste of energy. We stopped doing what we were doing and had to concentrate on that for awhile since we were told it was something that was going to come to fruition. I haven’t seen the movie and I think they ended up with something more suitable for it, but in terms of making A Moon Shaped Pool it caused a stop right when we were in the middle of it.”

[Radiohead was asked to record the theme song for the fourth James Bond film in the Daniel Craig era, but Sam Smith’s “Writing’s On The Wall” was ultimately selected.]

Jonny Greenwood: “We went to some awards show years ago, I can’t remember which one. U2 got something and then Ed and Phil came on afterward to get an award for packaging or something. The difference was comical. U2 walk on with such charisma and just swagger on. Then us idiots shuffle on. We’d feel awkward and would make everyone in the audience feel awkward.”

Okay, maybe we could have guessed that last one.

Head over to Rolling Stone to read the full feature.