14 Fun Things To See And Do In Fabulous Folkestone

Beach Huts on Coastal Path Folkestone to Sandgate | © Kate Jefford
Discover fabulous coastal walks, stunning views of France, free world-class art, funky shops, fresh seafood and a wealth of history. Folkestone is the up-and-coming seaside town with something for everyone. Catch the sleek high-speed Javelin from St Pancras and in less than an hour you could be exploring its cobbled streets and cliff-top paths for yourself.

Promenade Along The Leas

Don’t forget your camera as you stroll along the mile-long Leas promenade, as it is one of the most photogenic settings in England, designed in the mid-1800s by Decimus Brown, who also worked on London Zoo and Kew Gardens. The Leas is an exquisite cliff-top boulevard of architecturally celebrated mansions and crescents, sweeping lawns and colourful, carefully-tended flower beds. France’s renowned Opal coast, only 17 miles across the channel, is visible on a clear day, while on the tip of the western horizon you can spot the famed Dungeness power station. 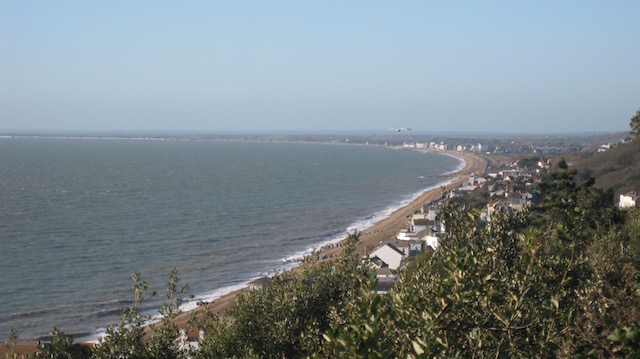 Take In An Open-Air Concert

In the summer months, whatever your taste, you can listen to music at the open-air concerts held at several popular venues around the town. Pull up a free deck chair to enjoy a traditional brass band at the Leas bandstand, or make yourself comfortable on the grassed Amphitheatre in the Lower Leas Coastal Park for a more contemporary sound. The Harbour is host to an annual Ska festival in August.

Zig-Zag, Sit, Stroll Or Explore In The Coastal Park

The celebrated Lower Leas Coastal Park opened in 2000 and offers three landscaped areas with something for everyone. On the eastern side, the undulating gardens with pine avenues and perennial flowers are a perfect picnic setting any time of the year. Adrenaline seekers can get their rush on the zip slide in the largest free adventure playground in the South East. The wild zone at the western end is a managed habitat for nature lovers to explore. The park can be accessed via the Zig Zag path that starts by the bandstand. Built in the 1800s to ferry bath chairs between the Leas and the beach, the path was restored as part of the coastal park development. It has caves and grottos and unique flora which makes it a destination in itself.

The Leas Lift originally opened in 1885 as the world’s third-ever hydraulically powered funicular. It was designed and made by the pioneering Waygood-Otis group, who built the first escalator 15 years later. A tribute to Victorian engineering and craftsmanship, the iconic red lift is still substantially intact and in working order. Between morning and early evening at weekends and in the summer, the lift connects the Leas to the car park east of the coastal park. However, it is dependent on volunteers for operation and maintenance. To date, the Leas lift has carried over 50 million passengers.
Note: opening times vary.

At the eastern end of the Leas is the stainless steel Step Short Centenary Arch. It was opened in August 2014 by Prince Harry as a monument to commemorate the beginning of the First World War. Folkestone suffered many civilian casualties and was an important hub for troops as a base and departure point to the front. Beneath is a benched area with plaques documenting the town’s wartime history, a place for rest, reflection and remembrance.

Feast At The Harbour

Folkestone Harbour is perfect for a seafood feast any time of year. Take your pick of stalls run by local family businesses serving homemade delicacies. Try a plate of shellfish with noodles and tangy sauce, or a bowl of crab soup and eat al fresco at a picnic table. Or reserve a table at Rocksalt which is celebrity chef Mark Sergeant’s highly-regarded restaurant for classy meals using locally-caught fish. Between March and October, the harbour arm is open and foodie options overflow with its string of innovative restaurants, including a champagne and shellfish bar.

Walk On The Wild Side

The Warren, one Britain’s most important nature reserves, is part of the Dover-Folkestone Heritage Coast and the Kent Downs Areas of Outstanding Natural Beauty. A walk in the Warren will demand proper footwear and care, as much of it is covered with dense shrub and woodland. However, you will be rewarded with iconic views of the White Cliffs.

Start at Cornelia Parker’s mermaid statue on the rocks overlooking Sunny Sands, Folkestone’s only sandy beach. Head West past the harbour, where the coastal path stretches all the way to the Sandgate Riviera, overlooked by graceful cliff-top houses. En route is vast stretches of pebbly beach, brightly painted beach huts, various contemporary artworks and the previous home of the famous writer and visionary, HG Wells.

Check Out The Plimsoll Line

A handsome church dating back to Saxon times, St Martins stands on a hill overlooking Sandgate in Cheriton, at the western end of Folkestone. Samuel Plimsoll, the shipping reformer who died in Folkestone in 1898, is buried there. He invented the Plimsoll Line, represented on his gravestone, which demarked the safe limit to which ships could be loaded, thereby promoting the welfare and safety of sailors.

Indulge In Vintage, Art And Design On The Old High Street

The Creative Foundation is an independent visionary arts charity dedicated to the regeneration of Folkestone as a place to live, work, study and visit. This has included developing a Creative Quarter in the old town by restoring unused properties into contemporary spaces for creative businesses. Traversing the heart of the Quarter is the steep, cobblestoned Old High Street with a diverse range of shops for visitors to peruse, ponder on or purchase. This includes a café collective, a chocolatier, quirky vintage fashion, design and vinyl, locally produced food, wine and gin, contemporary fashion and design, gift shops, and artist studios.

The Folkestone Triennial is the flagship project of the Creative Foundation, a festival of artwork in streets and open spaces, with the next one already planned for 2017. However, you don’t have to wait until then. A legacy of 27 artworks originally commissioned for the triennials of 2007, 2011 and 2014 are on permanent display around the town and can be enjoyed free of charge by residents and visitors alike, including six exquisite bronzes by Tracey Emin. Maps and information are available from the Creative Foundation.

Get Literary At The Quarterhouse

Kick Back In One Of Folkestone’s Green Spaces

To the north of Folkestone Central railway station, Radnor Park is an open green space with the Kent Downs as a backdrop. Its fields are used for sports and recreation, and hosting car boot sales or a visiting circus. Walkers appreciate its paths lined with chestnuts, beeches and limes. There’s a duck pond where you can also fish if you have a licence. South of the station the enclosed and intimate Kingsnorth Gardens is a peaceful oasis. With a rose garden, goldfish pond with fountain and water-lilies, shrubs and meandering paths laid out in Italianate, Oriental and English styles, it is a popular refuge right in the middle of town.

See A Movie At The Silver Screen

Whether you are a true film buff, or whether it is simply a rainy day, you will be charmed by the red plush Art Deco interior of this gem of a cinema. It has two theatres, including one with classic balcony seats. The Silver Screen has charming, friendly staff, shows the latest blockbusters and also has a Classic Film Club on Thursdays. A passionate campaign by local fans saved it from closure in recent years.

Fabulous Cinema in Folkestone © Upsticksngo/Flickr
Give us feedback