Across the world, churches, abbeys and other religious buildings remain among the most visited destinations year in and year out. Even for those without religious affiliation, these buildings offer a certain mysticism and romanticism that is quite unique to these types of building. With ruins, this mysticism only intensifies. While they represent destruction and decay, there is an undeniable beauty to ruined buildings. Below are 12 awe-inspiring abbeys and churches in Europe. 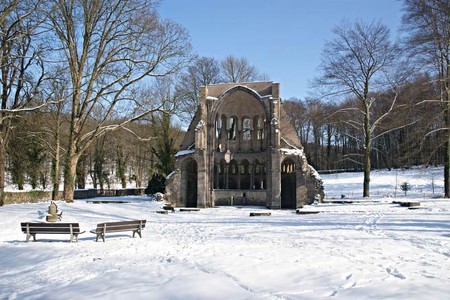 This Cistercian abbey was first founded in 1189 and consecrated in October 1237. Heisterbach Abbey was previously one of the most profitable of the Cistercian orders, drawing revenue from nearby towns as well as holding a number of large possessions. It was dissolved in 1803 during secularization, and has since been used to house an English garden, for tourism promotional photography, and since 1919 has again been a base for the area’s religious community. The domed remain, situated within the Siebengebirge, hints at the previous richness of an abbey which is now hidden within the woods and mountains.
Heisterbach Abbey, Heisterbacher Straße, 53639 Königswinter, Germany, +49 211 9269355.

Forest
Facebook
Email
Twitter
Pinterest
Copy link
Share
Previously one of the most important Benedictine abbeys in Germany, Hirsau Abbey fell into disrepair during the Nine Years War of 1692 and was never restored. It was first founded in 830CE and over its history was put to a range of uses, most notably as an Astrolab, for the measurement of latitude positions, from 1069. The visible remains of the Abbey includes the hunting lodge, the cloister and the lady chapel, which is still in use as a center for Protestant worship. An imposing figure within the Black Forest.

The first of the Scottish entries on our list, Holyrood Abbey has been been ruined since the 18th century and has not been used as an Abbey since the 17th century. It served as a royal residence from its inception in 1128 and hosted coronations, weddings, births and burials of numerous heads of state from the 12th to 17th century. The remaining nave is one of the area’s most precious examples of medieval architecture. Free tours run throughout the summer months.
Holyrood Abbey, Canongate, Edinburgh, UK, +44 (0)131 556 5100

One of the oldest and largest Benedictine monasteries in France. In near-continuous operation for over 1000, Jumièges Abbey became one of the many victims of the French Revolution, when it was forced into ruin at the end of the 18th century. It was first founded in 654 as part of a gift of forested land and was reconstructed in 1067 by William the Conqueror. Its white towers rise over 50 meters in height, creating an impressive spectacle for visitors and the site has previously named as the most beautiful ruins in France. 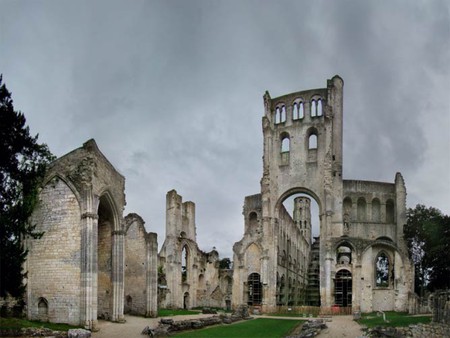 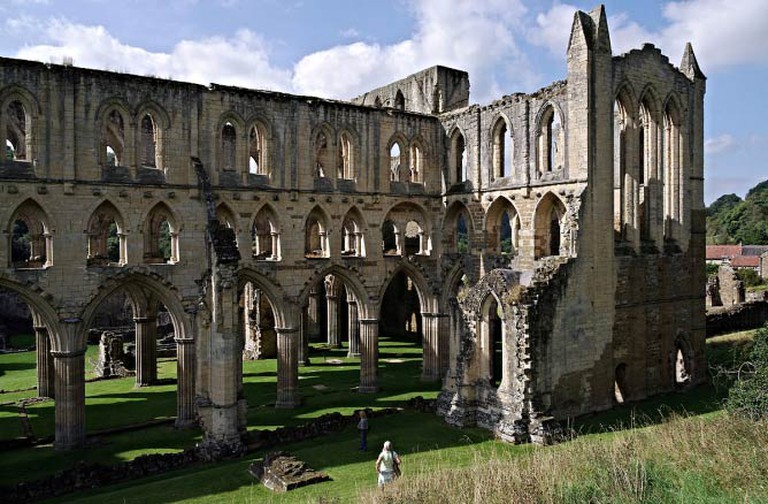 Rievaulx Abbey | © WikiCommons/Matt Buck
In terms of beautiful ruined churches and abbeys, Yorkshire possibly has the highest concentration in the world. Many of the abbeys in England were dissolved as part of the Protestant ‘reformation’ under Henry VIII. Founded in 1132, Rievaulx Abbey went on to become one of the wealthiest monasteries in the country until it fell in 1538. It remains one of the most complete and atmospheric of the abbey ruins in England and is currently run as a tourist attraction by English Heritage.

Quin Abbey was first built in the 15th century under the Franciscan order on the remains of an earlier Norman castle. It is currently a national monument, due both to its architecture and in part to its turbulent history. On several occasions the monks were driven off or killed, most notably under Henry VIII and later Oliver Cromwell. It was officially suppressed in 1541 but had a handful of monks inhabiting it until the 19th century. From the top of the tower, which is still structurally sound, visitors can admire views of the surrounding countryside.
Quin Abbey, Ennis, Co. Clare, Republic of Ireland 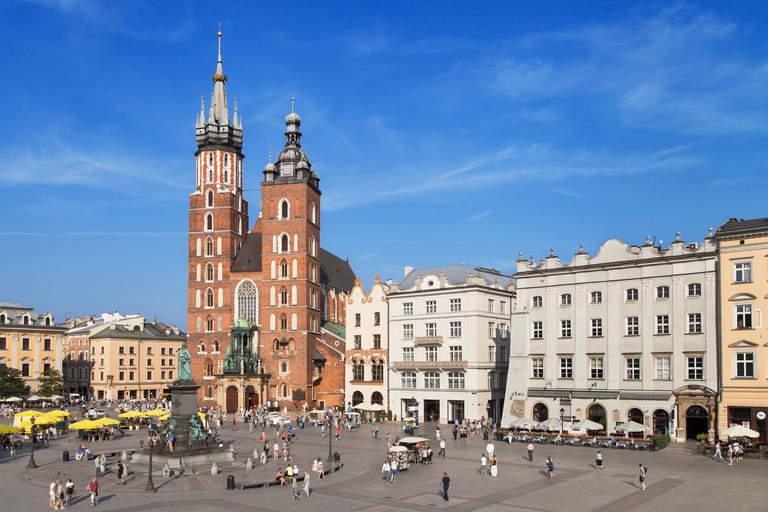 St. Mary's Basilica, Krakow | © santirf / Getty Images
Built to accommodate and influence the growing Christian population in Warsaw during the 13th and 14th centuries, St Mary’s Basilica has remained one of the most famous churches in Poland over its eight centuries in existence. It is particularly well-known for its extravagant wooden altarpiece, made by the master carver Wit Stwosz, which incorporates over 200 carved and painted figures depicting both religious and everyday life in detail. It has served as the architectural model for many of the Polish churches that were built abroad, but really goes to show that the original is always the best. 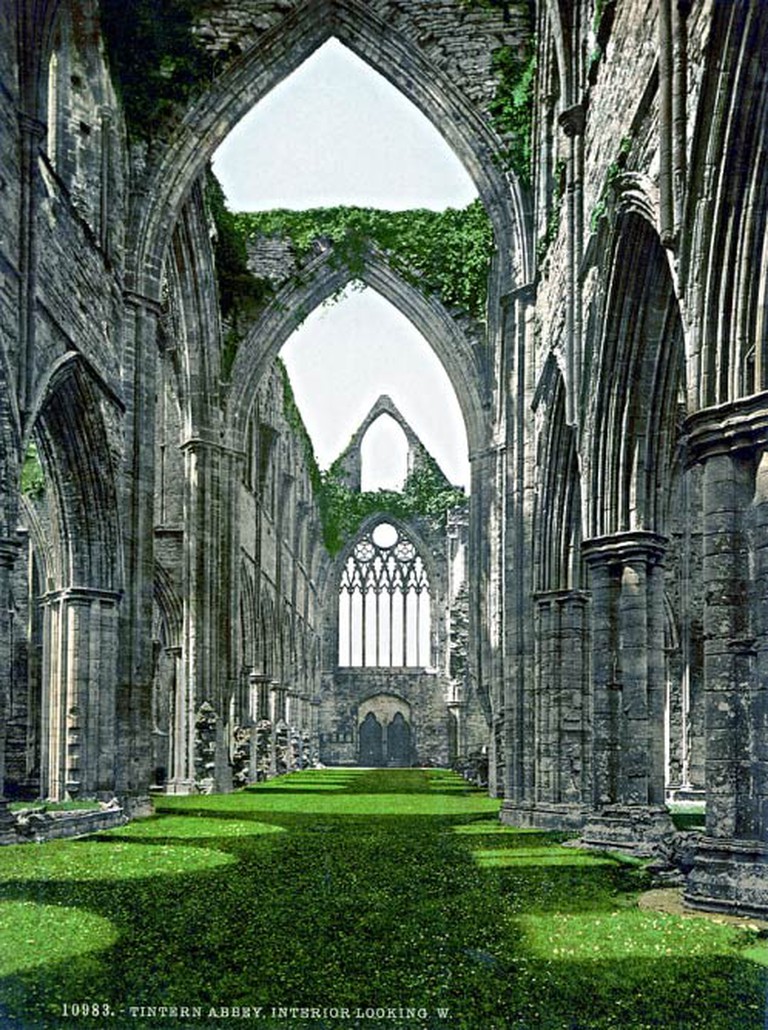 Tintern Abbey | © WikiCommons/Photochrom
St Nicholas’ Church was formerly one of the five main Lutheran churches in Hamburg before being bombed in WWII. The original church was first built in the 12th century and underwent renovation and rebuilding in the 14th, 16th and 19th centuries. The spire, the only remaining part of the church, is 147m in height, making it the tallest building in the world between 1874 and 1876 and it still remains the second tallest building in the city. The towering structure still dominates Hamburg’s skyline. 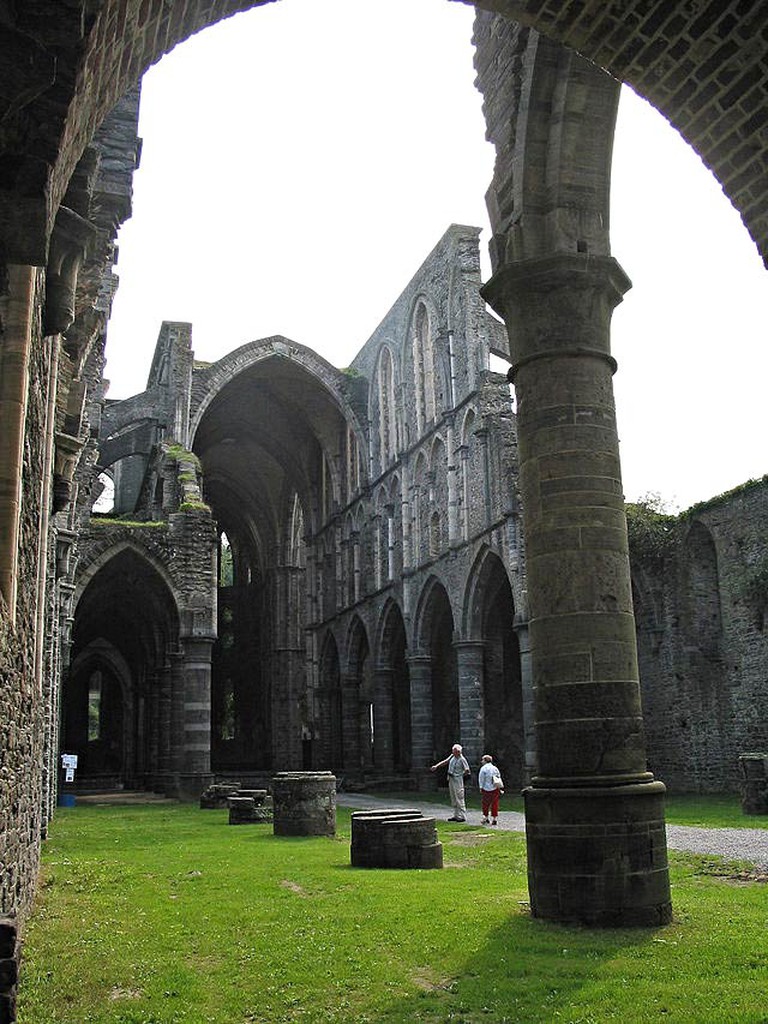 Villers Abbey | © WikiCommons/Jean-Pol Grandmont
Tintern Abbey was only the second Cistercian Abbeys founded in the United Kingdom and the first to be erected in Wales. The Abbey was surrendered to Henry VIII’s troops in 1536, and the remains of the buildings feature a range of architectural styles from over the course of its life, starting in 1131. The ruins have inspired works by William Wordsworth, Alfred, Lord Tennyson, Allen Ginsberg and J. M. W. Turner. The main church is still largely intact and its impressive Gothic architecture makes it among the most visited sites in Wales today. 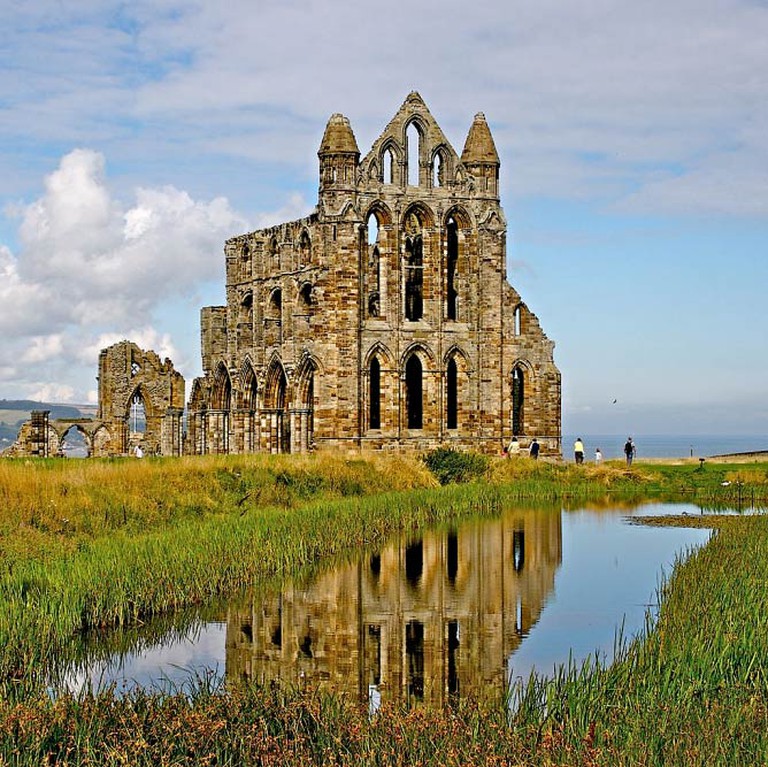 Whitby Castle | © WikiCommons/Mike Peel
The second of the ruins on our list to have had its fate sealed by the French Revolution. Much of the original structure of Villers Abbey is very much in ruination, but with the main foundations still remaining, it gives us one of the more complete glimpses into the life within the Cistercian order from the 1140s onwards. The vaulting arches and rose windows are prime examples of Cistercian architecture. In the 19th century, a railway line was built through the grounds, but at the turn of the century the Belgian government launched a conservation effort, which is still in effect today.

The Wang Church was very close to being pulled down in the 1830s due to the belief that it was unsafe and too small. Fortunately, a long drawn-out protest effort by painter Johan Christian Dahl resulted in the church being reconstructed at a different site in order to ensure its structural safety. The original four-post stave church was built around 1200, and its 19th century reconstruction painstakingly emulated the 13th century characteristics. It is believed to be the most visited stave church in the world, and is a testament to the importance of this style of architecture over the centuries.

The only Abbey that has a stake to fame in inspiring Bram Stoker’s Dracula. Whitby Abbey is a Benedictine Abbey which has stunning views across the North Yorkshire countryside and the north sea. It was founded in 657CE and, like the other British Abbeys on the list, fell under Henry VIII. Prior to this, it was attacked several times in the 8th century by the Danes, and was reinforced to its current structure after this time. The substantial Gothic remains presents visitors with impressive architecture made grander by its stark surroundings.
Whitby Abbey, Abbey Lane, Whitby, North Yorkshire, UK, +44 (0)1947 603568.