12 of the Most Underrated Video Games from Japan 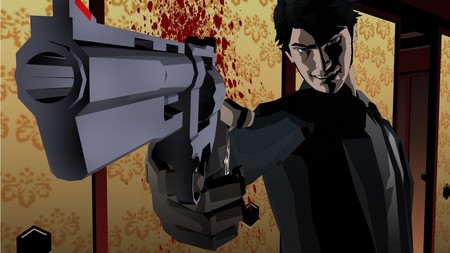 As a nation which is synonymous with video games, Japan has so many buried gems that even trying to catalog them all would give one’s brain reasonable cause to liquify and come spurting out of one’s nostrils in a jet of grey fluid. That said, there are some titles which are mandatory experiences. Here are a dozen of them in no particular order.

What Sort Of Game Is It?: A confusing arthouse acid trip with shooting and puzzle-solving.

Why You Need To Play It: If David Lynch and Takashi Miike ever got drunk together and brainstormed ideas for a video game, that game would be Killer7. Take control (sort of) of an elite group of assassins as they attempt to save the world from nightmarish, grinning suicide bombers and get ready to experience a surrealist masterpiece unlike anything you’ve ever played. The visuals, sound design and game play are so astonishingly odd that there’s no way they should work together – and yet somehow they do. Brilliantly, in fact. The Gamecube port is the definitive version as Killer7 was built from the ground up for the console, before a panicky publisher (Capcom) hastily assembled a PS2 port when they realised the game was so goddamn weird that no-one would buy it (which they didn’t).

What Sort Of Game Is It?: Exquistely-drawn action RPG.

Why You Need To Play It: The Wii will be forever remembered as that cuddly little white box that old people used to play bowling on. Such an epilogue is inaccurate – while the device had undeniable populist appeal, it also hosted unique hardcore experiences which you couldn’t find anywhere else. Muramasa is one of them. The game play is fluid and compulsive but what truly sets the title apart is its exquisite art style, as lovingly animated as any cartoon and a fantastic story told from the perspective of two different characters. An ever-so-slightly spruced up version was released for Vita a few years later.

What Sort Of Game Is It?: Cutesy action RPG.

Why You Need To Play It: Solatorobo was an informal sequel to Tail Concerto, a cult classic for the first PlayStation and like its predecessor, it harks back to charming kids anime of the 80s like Sherlock Hound and Around The World With Willy Fog. The game, featuring anthropomorphised animals and steampunk mecha can be a tad on the easy side sometimes (even the final boss is a diddle) but top-notch production values, awesome character designs (courtesy of acclaimed manga artist Nobuteru Yuki) and a great story make it a must.

What Sort Of Game Is It: Wistful, analogous Japanese role-playing.

Why You Need To Play It: At the very least, Eternal Sonata deserves inclusion for its story hook. Frederick Chopin (yes, that Frederick Chopin) ravaged by tuberculosis lies on his deathbed and spends his final hours dreaming up an elaborate fantasy world influenced by his life and music. What ensues is a classy mash-up of Final Fantasy and Kingdom Hearts incorporating, somewhat unsurprisingly, lots of piano music. The meaning of life and death are pondered over by our heroes amid all the beast-battling, making this title a breath of fresh air.

Why You Need To Play It: Let’s face it, who among us hasn’t wondered what would happen if Ryu from Street Fighter punched that dude from Battle Of The Planets in the face? That’s the otaku excitement that informs Tatsunoko vs. Capcom, as characters from the iconic animation studio face off against some of the most recognisable faces in video gaming (and a few of their more obscure counterparts). Accessible to fighting game newbies but also boasting plenty of meat and depth for veterans, you’ll come for the fan service but stay for the silky-smooth fighting mechanics.

Why You Need To Play It: It was criminally ignored upon release and is now a stone classic. The game blends elements of Pikmin, Harvest Moon and The Legend of Zelda for an experience every bit as delicious as that sounds. Oozing delight from its pores and made with the utmost love by its creators, a game like this is created with the intention of eliciting pure joy in the heart of the player. Spurn that joy at your peril.

What Sort Of Game Is It: Postmodern retro mini-game collection.

Why You Need To Play It: Re-visit some of the most beloved titles in 8-Bit gaming, the same ones that brought you so much delight as a child. Except they never actually existed. Confused? Don’t be. Retro Game Challenge is a very wonderful “what-if?” which takes classic genres (shooting, platforming, driving, role-playing) and makes them into delightfully nostalgic mini-games made to seem like they were seminal classics back in the day. It all makes more sense if you’ve seen Game Center CX, the cult Japanese TV show it’s based on, but as it is, it’s simply brilliant. Hunt high and low for a copy.

What Sort Of Game Is It?: Deliriously over-the-top robot-ninja sword-fighting ridiculousness.

Why You Need To Play It: Behold, one of the most glorious action games ever created. Set in the Metal Gear universe, the player takes control of Raiden (the androgynous whipping boy first spotted in Metal Gear Solid 2) and his trusty blade as he proceeds to slice anything that gets in his way, from cyborg mercenaries to helicopters and even skyscraper-sized giant robots. From hardcore darlings PlatinumGames (who gave us the equally wonderful Bayonetta), the game is a bit on the short side but combine jaw-dropping set pieces with sublime game play and repeat play-throughs feel like a pleasure rather than a chore. Be warned, it punishes casual players and the final boss fight is so tough that you will leave teeth marks in your controller.

What Sort Of Game Is It?: Hysterically slapstick beat-em-up.

Why You Should Play It: God Hand was the pet project of maverick auteur Shinji Mikami, cleansing his palette after changing video games forever with the legendary Resident Evil 4. Consequently, there is no po-faced survival horror to be found here, just a cartoonish love letter to martial arts TV shows of the 70s and Japanese comedy. The trade-off for such whimsy is that the game is difficult, but it’s impossible to be mad at any title that lets you stomp baddies repeatedly in the crotch before a single kick sends them flailing into the stratosphere. If you can stick with it, the rewards are immense.

What Sort Of Game Is It?: Shinto action-adventure

What You Need To Play it: The praises of Okami, the universally-adored PlayStation 2 title, have been sung far and wide. Its DS remake/pseudo-sequel deserves love for being a great distillation of what made the first game so special in the first game, more so for squeezing it all onto a by-then woefully-underpowered console. Wolf-goddess Amaterasu may not have any more adventures coming up any time soon, which is sad, but the escapades of celestial pupper Chibiterasu are enough to tide us over while we wait for a religious miracle.

What Sort Of Game Is It?: Action-platforming sprinkled with RPG elements.

Why You Need To Play It: A Wonder Boy title in all but name (developer Westone was responsible for the much-loved series) and also one of the great lost video games, as it was a Japan-only release before a download-only re-release in 2012 as part of the archival Monster World Collection. It’s a shame more people didn’t get their hands on a physical copy of this, as it’s Westone’s crowning achievement, with all the elements they made their name with polished to a high sheen. A lovely reminder that innocence in video games doesn’t have to be bland or uniform.

Why Sort Of Game Is It?: Tough-as-old-boots action platforming.

Why You Need To Play It: An obscure Ghosts n’ Goblins spin-off and the final instalment in the Gargoyle’s Quest trilogy (which began on the Game Boy), in which you take control of anti-social demon Firebrand and guide him through a hellish underworld of fire and brimstone. Demon’s Crest makes the list thanks to awesome art design, with visuals that belong on a heavy metal album cover, plus a level of difficulty designed for people who hate themselves. But behind the masochism lies a finely-crafted piece of video gaming for all the true believers out there.