12 of the Best Anime to Watch Right Now on Netflix 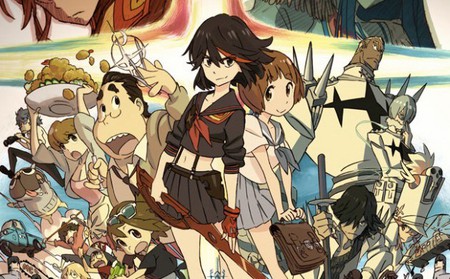 Netflix is building an impressive collection of Japanese animation, from 90s classics up to present day must-sees. Here’s the best of the bunch, preferably viewed asap before the licensing fairies whisk them away.

What It’s About: Kill la Kill isn’t just one of the best anime to emerge in recent years, it’s one of the best things to emerge from anywhere, ever. Delinquent student Ryuko Matoi must avenge the death of her father in a fictionalised, fascist Japan of the near future. What ensues is an insane mash-up of Dragonball Z, Sailor Moon and Kill Bill unlike anything you’ve ever seen. The show is dazzlingly relentless, with fight scenes that literally have to be seen to be believed, all delivered with a punky art style and a risqué playfulness that pushes the envelope while never tearing it completely open.

Why You Should Watch It: Imagine the buzz of a double-espresso after the best sex of your life. Kill la Kill accomplishes this and more. Extra brownie points for the anti-fascist subtext and bombastic soundtrack.

What It’s About: If you’re curious, you’re in for a treat. If you’ve seen it before, then it’s time to give it another spin. The landmark sci-fi anime about intergalactic bounty hunters combined music, action and incredible world-building with unforgettable characters and a superb story. One of the all-time-greats.

Why You Should Watch It: As essential now as it was in 1998, the show hasn’t aged one bit. Decades later, that theme tune is still boss.

What It’s About: One of the more recent anime to become a global phenomenon, the anime’s iconic green capes and khaki uniforms are a regular sight at comic-cons and the series got an epic two-part live-action adaptation in Japan during 2015. Grotesque, man-eating giants stalk a human race that has desperation and medieval technology as its only means of defence. Attack On Titan has a propensity to be just as merciless as The Walking Dead (only with a writing team that actually knows how to tell a story), so keep a strong drink handy after each episode.

Why You Should Watch It: Fresh and original, AoT is utterly gripping with a plot that incorporates gob-smacking twists but always remains on point. As nerve-shredding as it is compelling.

What It’s About: With a storyline so brutal that Game Of Thrones seems like Modern Family by comparison, Aldnoah Zero is a giant robot anime which pulls no punches. In the future, warring factions do battle with each other on Planet Earth in the aftermath of a political crisis. Along the way, seemingly unstoppable giant robots cause epic carnage while kind-hearted heroes face an ever-more daunting challenge to stop them. Kafka-esque levels of punishment are meted out left, right and centre.

Why You Should Watch It: Fantastic mech (robot) designs are combined with an intricate narrative that keeps the viewer hooked. Also, most of us can probably relate to getting totally screwed over for little or no reason

What It’s About: Gurren Lagann was the debut production from a team at Gainax (Evangelion, FLCL, Gunbuster) that would eventually form the studio Trigger (and blow everyone’s minds a few years later with Kill la Kill). Ergo, it all feels very much like an enthusiastic warm-up for the craziness that was to come. A humble teen inherits a super-powered mech and brings his friends along for the ride as he sets out to save the world. GL is a joyful, comedic take on the sort of giant robot anime that Japan is now synonymous with, packed with regular bursts of OTT action and larger-than-life characters.

Why You Should Watch It: Refusing to take itself too seriously despite its apocalyptic setting, Gurren Lagann is bright, colourful and big on set pieces.

What It’s About: Adapted from the acclaimed, visually dense manga, Blame is an epic tale about an endless city that gains sentience, and upon realising it no longer cares about its human inhabitants, makes their lives hell. (Not unlike renting in London, then). Humanity’s only hope lies with a plucky bunch of youngsters aided by a mysterious figure with extraordinary abilities.

Why You Should Watch It: Highly atmospheric with superb production design and a fluid, state-of-the-art animation style. All those scuttling Exterminator robots are the stuff of nightmares.

What It’s About: A different take on the archetype of a wandering samurai badass, Ruroni Kenshin revolves around a ronin in feudal Japan who, driven by atonement and a violent past, has pledged to help people but also to never kill again. This, however, does not deter him from clashing swords with a wide variety of foes while he tries to make peace with his past.

Why You Should Watch It: Epic, awesome fight scenes, as expected, but a special mention must go to the show’s thematic tone, with its emphasis on the need to protect human life no-matter what the cost.

What It’s About: An intriguing hybrid which feels like a mash-up of Marvel Comics and legendary mangaka Go Nagai, Ajin is centered around mild-mannered student Kei Nagai, who just wants to study to become a doctor until he is hit by a truck and discovers that he is in fact an immortal entity caught in a deadly game of cat and mouse between the Japanese government and a race of beings called Ajins. Queue lots of creepy ghost warrior thingies and young people complaining how weird and unfair life is.

Why You Should Watch It: The basic plot is pure pulp, but what could have been a total and utter hack job is saved by a mature, sophisticated approach to both storytelling and visuals.

What It’s About: Another from Trigger, LWA is an unashamed love letter to classic children’s entertainment, from Harry Potter and The Worst Witch all the way through to video games. Young Akko Kagari is a student witch at Luna Nova Magic Academy but predictably enough, she must run the gauntlet of disapproving peers and occupational hazards as she seeks to hone her abilities and discover herself.

Why You Should Watch It: A refreshing change of direction for Trigger, who decided to do a Pixar and make something that the whole family can enjoy, without abandoning their house style. We’ve seen this story told before, but Trigger’s boundless sense of invention, comedic flourishes and visual flair make it a joy to watch.

What It’s About: KoS mixes Gundam and Battlestar Galactica with high-concept, speculative sci-fi. In the year 3394, mankind has fled the earth after alien invasion and now wanders the stars. The starship Sidonia is one of the last bastions of humanity, with a population of asexual clones who have been genetically engineered. While fighting off nasty aliens, our protagonists ponder what it means to be human in an age where humanity has been overtaken by science.

Why You Should Watch It: Knights Of Sidonia’s blend of Philip K. Dick and mech arse-kickery may feel odd at first but in the end goes together like chocolate and peanut butter. And those robots look awesome.

What It’s About: One for the hardcore. The original Gantz is notorious for its Battle Royale-in-hell storyline, sexualised violence and overall lunacy. There’s already a manga, anime and live-action film but now we get a CGI spin-off, with yet more pretty people in skintight black outfits using cool-looking guns to slay hideous beasts, all the while fancying each other and surviving encounters with numerous phallic/vaginal metaphors.

Why You Should Watch It: A prior knowledge of the Gantz universe is preferable, but there’s still plenty of spectacle and entertainment to be had even if you’re a noob. Plus, the slick CGI powered by Japan’s finest supercomputers ensures that the movie looks incredible, even while you spend chunks of your viewing time scratching your head/entertaining impure thoughts.

What It’s About: A lonely widower rediscovers memories while exploring a sunken house in this charming, heart-breaking short film with a style that recalls European animation of the 1980s. The whole thing is completely dialogue-free across its 12 minutes but has much to say about life. If this one doesn’t make you misty-eyed at the very least then your soul probably needs an M.O.T.

Why You Should Watch It: Beautiful hand-drawn animation coupled with an exquisite soundtrack makes it feels like a children’s storybook brought to life. Grown men will weep.