12 Cyberpunk Anime You Need to Watch 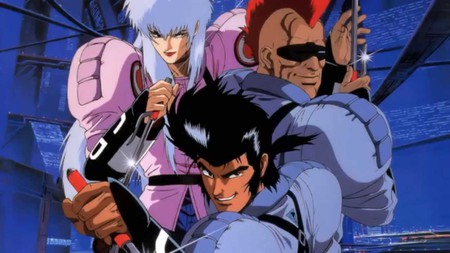 Thanks to Blade Runner 2049, cyberpunk is suddenly back in the pop culture conversation. Whether you’re a long-time or a newcomer to the genre, we’ve compiled a list of the best and most memorable anime from the last few decades. Here’s our rundown of the top cyberpunk anime you need to watch.

Genocyber makes this list for two things – an unrelenting sense of brutality and visceral spectacle so intense that you’ll feel like you need to shower afterwards. All taboos are tossed mercilessly aside. Imagine what would happen if David Cronenberg indulged his most sadistic instincts via the medium of animation, and you’re partway there.

Legendary creator Yoshiaki Kawajiri (Ninja Scroll, Wicked City) made his bones with this story about a trio of bad guys recruited to do some dirty work in a futuristic Oedo (an alternative spelling of Edo, the former name for Tokyo). Kawajiri’s action chops are in fine form even in this early work, which is nearly 30 years old but still looks and sounds great.

So ingrained is Ghost In The Shell in the cyberpunk oeuvre that it feels odd picturing a time when it didn’t exist. What makes the original feature film – adapted from Masamune Shirow’s unfathomably dense manga – so unique is not just how timeless its animation feels but also how brisk it is. The film clocks in at a breezy 82 minutes – pretty good going for a work that would have such a huge impact.

George Orwell and Philip K. Dick rub shoulders with Law & Order in this thriller set in a world in which citizens are ruthlessly and routinely scanned to determine their chances of committing a crime. Enter a rookie cop and her hard-bitten partner as they attempt to clean up the (darkly-lit) streets. Psycho Pass may routinely indulge its clichés, but makes up for them with great storytelling and tough-as-nails story arcs. Plus it has really cool transforming guns.

Soon to be a live-action motion picture from James Cameron and Robert Rodriguez, Battle Angel is Pinocchio but with a female protagonist and a lot more violence. A kindly doctor brings a discarded android to life, only for her to become a bounty hunter and rediscover her memories and identity by kicking everyone’s arse. A firm emphasis on great characters means that the OVA is still a lot of fun to watch.

There’s not a great deal that needs to be said about this magnificent title, only that it was essential when it started its run in 1987 and it’s still essential now. Armoured heroines do battle with super-powered techno fiends in the future, and the rest is simply audio-visual heaven. It’s seen remakes and bad sequels, but the original remains unsurpassed.

Megazone 23 is a title that has had far more influence than it’s been given credit for. Titles like The Matrix owe it a debt and its stunning mecha designs from the great Shinji Aramaki remain a feast for the eyes. Parts of the movie were cut and pasted with elements from Super Dimensional Fortress Macross to create Robotech: The Movie in the West.

Shou Aikawa, who traumatised you earlier on with Genocyber, was the screenwriter for this cult classic, which enjoys a dedicated following thanks to its ludicrously strong violence. The story is a gonzo take on Robocop complete with psychic warfare and the sort of outfits that would normally be seen in a Judas Priest video. The BBFC had its way with the original as it was deemed too strong for British audiences and underwent several cuts, and its underground status would ensure its popularity among the faithful for years to come.

This much-loved 90s anime riffs on Blade Runner, set in a world where humanoid robots – virtually indistinguishable from the real thing – are hunted down and killed by police. The story starts out as a buddy-cop drama but soon goes much deeper as the line between human and inhuman gets thinner and thinner and our heroes start to ponder their reasons for being.

This Bubblegum Crisis spin-off only got three episodes in before it was stopped in its tracks due to a legal dispute. A shame, as this title is rich and atmosphere with a dark, macabre tone. A special unit encounters gruesome technological foes and there’s plenty of blood to be spilled. It’s not without its flaws, but has more than enough merits to make it worth your while.

This Japanese-American co-production did far better justice to the Appleseed franchise (based on the classic manga by Ghost In The Shell creator Masamune Shirow) than its limp 2004 predecessor. A kind of semi-prequel (it doesn’t adhere to the same continuity), we join Deunan and faithful cyborg bestie Briareos as they wander through the ruins of a post-apocalyptic New York City and fight off ultra-badass giant robots. Shinji Aramaki, the big cheese of CGI animation, directs with his trademark vigour.

Gritty to the core, Mardock Scramble tells the of a 15-year-old prostitute who survives a near-death experience and is reborn as a cyborg, tasked with bringing her tormentors to justice. Visually spectacular and wearing its film noir influences proudly on its sleeve, this title is one of the lesser-known cyberpunk titles to emerge from Japan in the last few years but is also one of the best.