11 Reasons to Make Jersey, Channel Islands Your Next Holiday Destination 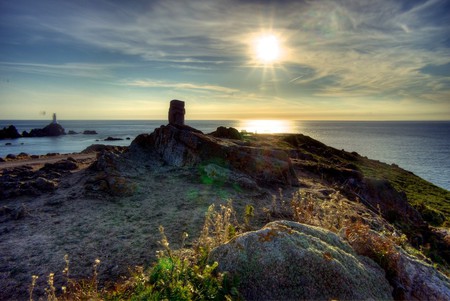 Jersey, the largest of the Channel Islands which nestle between the coasts of England and France, is a beautiful and serene destination filled with stunning coastlines, pretty harbours and bags of charm. There are plenty of reasons to visit this 9-mile long island in the English Channel and here are 11 to persuade you to get on that plane, or that boat.

Despite its small size, Jersey has a wide variety of landscapes to enjoy. From the quaintness of St Helier and St Aubin’s in the south, to the quiet beaches in the north. There are picturesque houses, high cliffs, old castles and remote lighthouses.

If you head all the way to the south eastern tip of Jersey to La Rocque Harbour and wait until the sun goes down, take a walk on the beach and wait for a fireworks display to light up the sand. Glow worms live on top of the sand here and shine bright when they are disturbed. As long as there isn’t a full moon, you can see them all year round.

In Jersey you can get it all; white sands and azure seas, furious waves and windswept cliffs. Beaches are family friendly and filled with adventure and networks of caves. The Jersey coastline is breathtaking, rugged and so majestic that you’ll run out of storage on your phone after taking too many pictures.

Solitude, if you want it

Jersey is small and it can have the effect of making you feel a little claustrophobic if you follow the crowd, but there are so many hidden beaches and rarely tramped areas of the coast path that it’s easy to find some peace and quiet, even in August.

Being surrounded by the sea, it’s no surprise that the seafood on Jersey is outstanding. But it’s not just the fruits de mer which make this island an exceptional foodie destination – it’s proximity to France has had some serious gourmet influence and there are some unusual yet wonderful Jersey cuisine, such as Jersey Black Butter made out of apples, Jersey cider and spices.

Small islands are known for their ability to celebrate and Jersey is no different. From the Battle of Flowers to Weekender Jersey and the Cider and Black Butter festivals, there’s a party for every season and local delicacy.

Most of the B&Bs and guesthouses in Jersey are owned and run by islanders who have lived here all their lives. This has resulted in some super friendly accommodation and access to real knowledge from people who are passionate about where they are from. There are also glamping options on the island, as well as the opportunity to stay on boats, in castles and in the island’s Radio Tower.

The Channel Islands were captured by the Nazis during WWII and as such have an interesting and sometimes morbid history. The Jersey War Tunnels are of exceptional interest and are filled with useful information on war time on the island.

This isn’t an ordinary zoo, the Durrell Wildlife Park isn’t there simply for visitors to gawk at animals in captivity. This centre is all about teaching about the environment, conservation and saving species from extinction. There are wildlife talks all day and the animals have large and spacious enclosures where they can roam, eat and breed at their leisure.

There’s something about being on an island which makes you feel at home. Mostly because everyone knows each other and everyone says hello. Jersey is no different and here you can pick up eggs and veg from street hedges, talk to the same man in the same pub over the same pint of beer four nights in a row and feel totally at ease in this slower than a snail’s pace environment.

Island sunsets are magic and if you stand in the right spot, you can feel as though you are on the only chunk of land in the whole world, surrounded by nothing by a blazing sky as it turns from day to night.