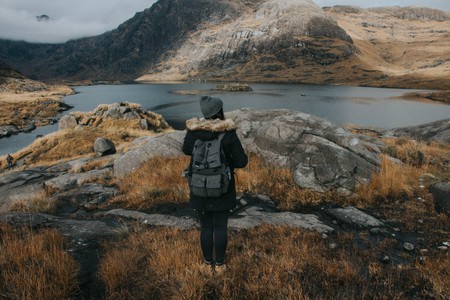 The UK is one of the most picturesque places in the entire world, full of rolling green hills, thick pine forests, dramatic coastlines and towering mountains. Scrolling through Instagram, it’s easy to become distracted with the abundance of images depicting far-flung destinations and to forget how stunning our own island is. Here are 11 UK based photographers who share captivating images of the UK countryside with their followers. Browse their feeds and try to resist the temptation to escape the city to explore the wilderness.

Proving waking at 4am can be worth it. @b.christie_ | #peakscollective

UK based photographer Chris Buxton has travelled to far flung destinations, but it’s his dramatic images of Wales that are his most captivating. From the dizzying heights of Snowdon, to the cliffs of the Pembrokeshire coastal path and mountain-top lakes in the Brecon Beacons, Chris lovingly documents Wales in a way that will make you instantly want to book a trip.

The only way to truly experience the incredible scenery is to pull on those sturdy boots, pack your lunch and head to the Pembrokeshire Coast Path @tevaeurope #tevaexplorercollective #ad

Based in Bath, adventure photographer Beth Squire loves to shoot dramatic coastlines and rolling hills. Her awe-inspiring shots of British locations such as the Brecon Beacons, the Dorset coast and the wilds of Scotland may be mixed in with overseas destinations including Alaska and the Faroe Islands, but her clever photography skills shock you into realising that breathtaking scenery is lurking not far from home.

Drone shot from earlier today. This has to be my favourite road in the Brecon Beacons, it never fails to amaze me and it looks good in every season!

Although she is currently residing in Norway, Lancashire lass Katy’s feed is predominantly peppered with green-hued images of Scotland, Wales and the north of England. An adventurer at heart, Katy loves to explore the countryside, taking her followers on a journey through lush forests, along mountain roads and across beautifully bleak moors. If you’re at all disillusioned that it’s grim up north, follow Katy’s feed to be proven wrong.

✨🌿 I cannot wait for Sunday's to become my designated adventure day again!! 🌿✨ Most of you (presumably) know that one of my biggest loves in life (after nature and reading) is Doctor Who, and today the 13th Doctor is going to be announced and I've been feeling nauseous about it since Friday 😅 This show is one of my biggest escapes. For as long as I can remember, I've been captivated by the thought of a blue box appearing in my room, and being whisked away by the owner of that blue box to far off lands, new planets, parallel universes. This show has been one of my closest companions throughout my life and so I'm always so concerned that when things change, I won't be able to connect with it anymore. But I trust in the showrunners that today's announcement will conjure up excitement, rather than disappointment (oh, and I'm ROOTING for a female Doctor!) 💙✨ What books/films/tv shows are your biggest comforts? 🎶: "Under The Water" by Aurora – – – – – #livewild #livewildbefree #visualsoftheearth #livefolk #visualsoflife #creativefolk #livedarling #liveauthentic #letsgosomewhere #seekthesimplicity #adventureawaits #wildernessculture #theoutbound #keepitwild #in2nature #gowildlyandslow #thewildnesstonic #quietinthewild #exploremore #whimsicalwonderfulwild #visitscotland #queensview #mermaidandfairytakescotland #mermaidandfairyadventures

Another Instagrammer based in the north of England, Ruth’s feed focuses on her simple life in the Peak District interjected with mountain-top adventures from across Europe. Working as a life coach, Ruth’s captions perfectly demonstrate how living and adventuring in the countryside can help to calm and satisfy your life. Follow Ruth’s feed to discover dramatic mountains to scale and luscious hills to run up.

I am walking slowly, I am taking photos in the rain, I am finding my food on foot, and writing what comes up from the edges. I am looking for the face I had before the world was made.. // △

Filmmaker and photographer, Hollie is based in the north of Wales, although at first glance you may think that her incredible photographs were shot in Iceland or the West Coast of America. Dramatic coastlines, eerie mountains, empty roads and ethereal waterfalls dominate her photography, predominantly focused around Wales but also depicting beautiful locations in Scotland and the rest of the UK.

Part of the Peaks Collective, Daniel Casson shares dramatic imagery from all around the UK, concentrating particularly on the Peak District and the Highlands of Scotland. His signature high-contrast style is instantly recognisable, securing his staggering number of followers with his awesome imagery. Alongside documenting some of the most visited natural landmarks in these areas, Daniel also steps off the beaten track, making his feed one to follow if you’re looking to do the same.

American photographer Lilly Husbands is now based in London, the perfect location for exploring and documenting the British Isles. Her dramatic imagery concentrates predominantly on natural landscapes with many photographs taken in Scotland and the Lake District in particular. Scroll through her feed to feel inspired to take weekend trips away from London to discover more that the UK has to offer.

Another highly talented photographer based in the Peak District, Brandon Christie helps to demonstrate why people should spend time exploring this beautiful national park. Like other landscape photographers in the UK, Brandon also shoots breath-taking images in Scotland and Wales, convincing anyone who views his feed to explore the more remote parts of Britain.

The hills and the coast of Britain are documented in equal measure on Ryan Sheppeck’s Instagram account, beautifully combining the cool blue of the sea with the greens and golds of the countryside. From Old Harry Rocks to the Isle of Skye, Ryan explores the most impressive natural landscapes on this island, juxtaposing his images of the UK with dramatic scenes from the likes of Iceland and the Faroe Islands.

Another angle of the amazing Green Bridge. Spending a few days along the Welsh coastline this Summer was incredible. It was the first time I've visited and I was blown away. Although this is a popular location I rarely see it crop up on Instagram so didn't really know what to expect, I wish I had something to show the scale, its huge! Definitely going to scout out some more scarcely shot locations after the hectic few months I have. Now I'm becoming more confident I can't wait to start really showing the beauty of the U.K. and not only Durdle Door or Old Man of Storr 🤙🏻 #visitwales

Lily shares ethereally beautiful images of her life living in the British countryside, documenting a romantic side of life in England. Moors covered in heather and gorse, luscious green forests and rich autumnal hues feature heavily in her images, crafting a feed full of inspiration for exploring the countryside.