11 Hidden UK Beaches You Should Explore 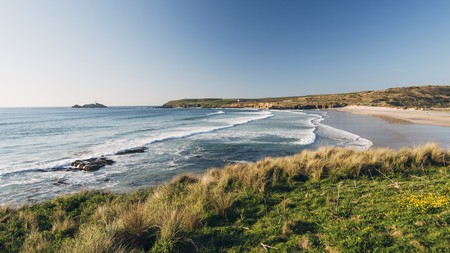 The UK’s picturesque and at times rugged coastline is home to golden stretches of sand that could rival any tropical paradise.

With many of them off the beaten track, Britain’s beaches are great places for us to safely and serenely dive in and take time out of your routine, and feel the sand between your toes, with a bottle of Corona in hand.

Take a look at these top picks for lesser-known natural beauty spots around the UK. 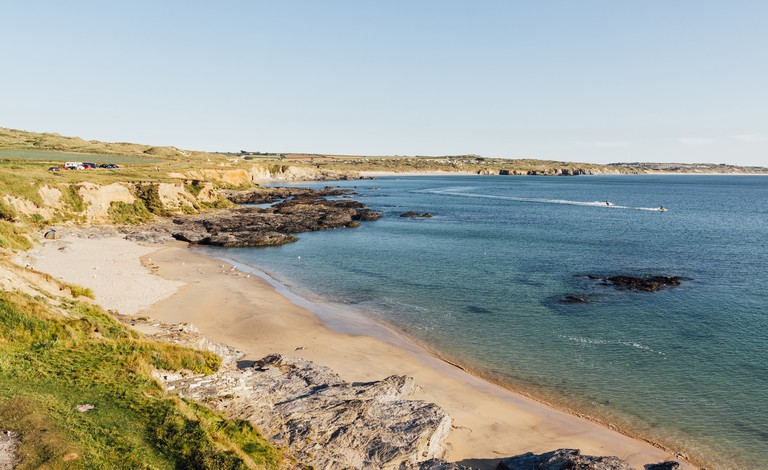 © lleerogers / Getty Images
Laid out like a carpet of wonders to sweep across on the brilliant 12-minute train ride from St Erth to St Ives, St Ives Bay is replete with riches. On the opposite side of the estuary, Hayle’s three-mile stretch of soft golden sand takes in Hayle Towans and Gwithian beaches before culminating at Godrevy Beach and lighthouse.
Open In Google Maps
United Kingdom
Give us feedback 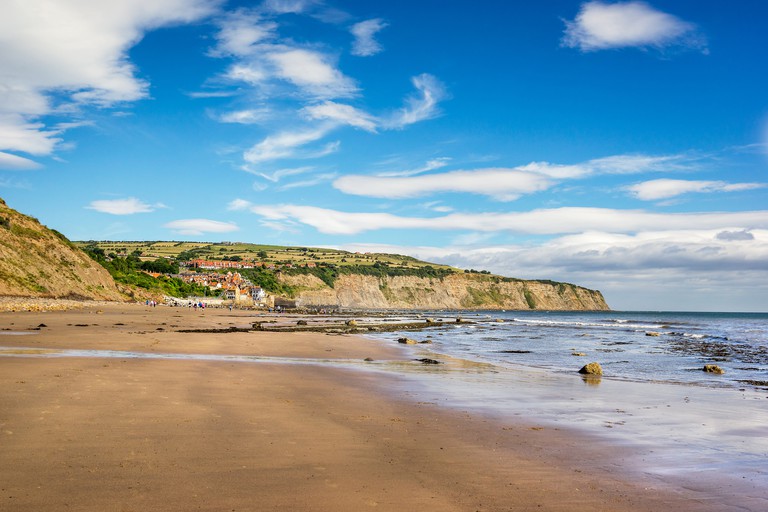 © GordonBellPhotography / Getty Images
Yorkshire is home to plenty of superb beaches, and one of our favourites has to be this one. Why? Because of the quaint cobbled streets of the fishing village leading to it and the fossils waiting to be discovered among its pools and sand. But perhaps most of all, it’s the top-of-the-world feeling to be had on a walk to Whitby (11km/7mi away) along the cliff-top path that forms part of the Cleveland Way National Trail.
Open In Google Maps
Robin Hood's Bay Road, Whitby, England, United Kingdom
Give us feedback 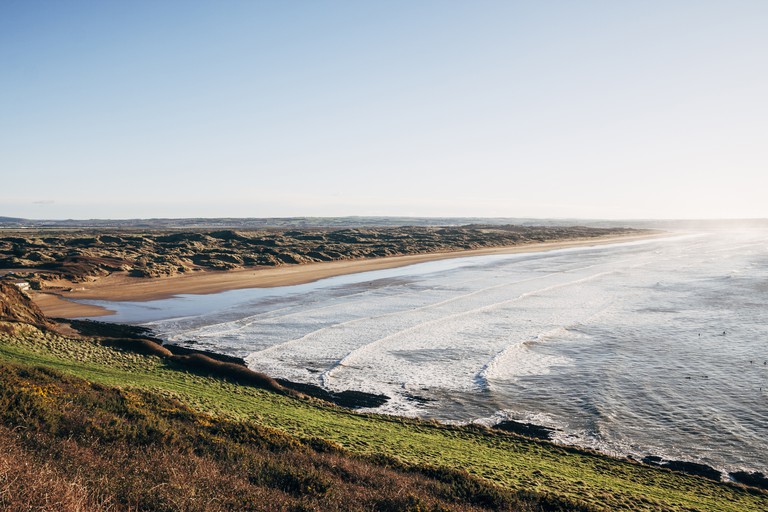 © lleerogers / Getty Images
Want some exercise with your beach outing? Make for Saunton Sands on North Devon’s wild coast. After big gulps of salty air as you tackle the peaks and troughs of Braunton Burrows – one of the biggest dune systems in Britain – you can reward yourself by doing nothing more strenuous than digging your toes into the sand as you watch surfers attempt the rollers breaking on 4.8km (3mi) of golden sand.
Open In Google Maps
England, United Kingdom
Give us feedback 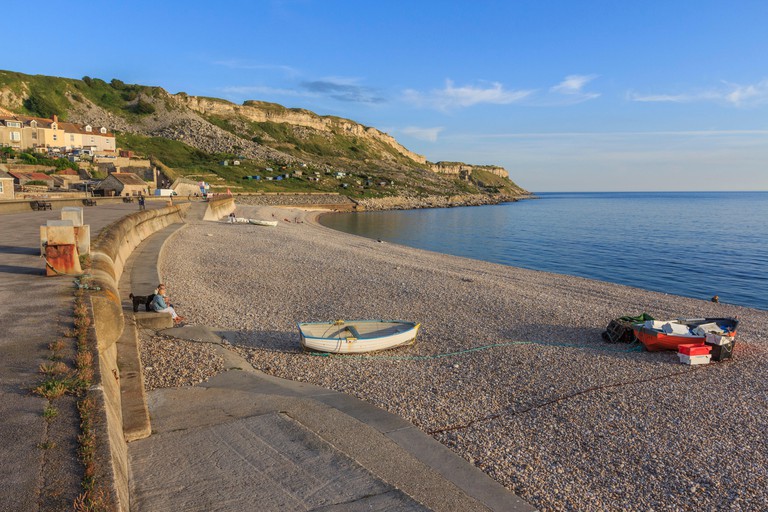 © Colin Palmer Photography / Alamy Stock Photo
The Jurassic Coast boasts many arresting beaches, but we’ve chosen Chesil Beach because, like the novella made famous by Ian McEwan, it is poetic in its moody beauty. The 6,000-year-old, 18-mile-long bank of flint and chert pebbles, visible from space, is separated from the land by the Fleet, a shallow tidal lagoon that’s home to 600 mute swans, creating one of the most arresting landscapes in Britain.
Open In Google Maps
Portland, Weymouth, England, DT4 9HF, United Kingdom
Give us feedback 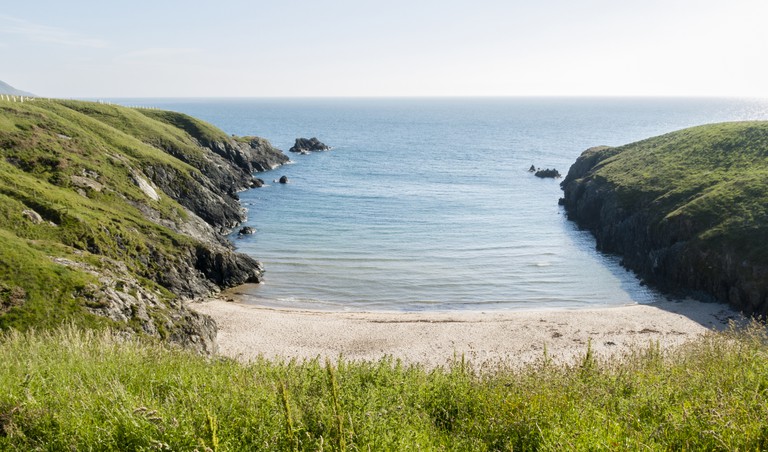 © Charles Hawes / Getty Images
Porth Lago beach is surrounded on all three sides by the low grassy headlands that is so characteristic of the Llŷn Peninsula. It can be reached along a little track and a steep sandy path from the hidden Ty Mawr farm. It feels like you’re hundreds of miles from anywhere, with no huts, no toilets, no café, no loungers… just you, your beach towel, the sound of the sea and maybe, your dog.
Open In Google Maps
Rhoshirwaun, Pwllheli, Wales, LL53 8LP, United Kingdom
Visit Website
Give us feedback 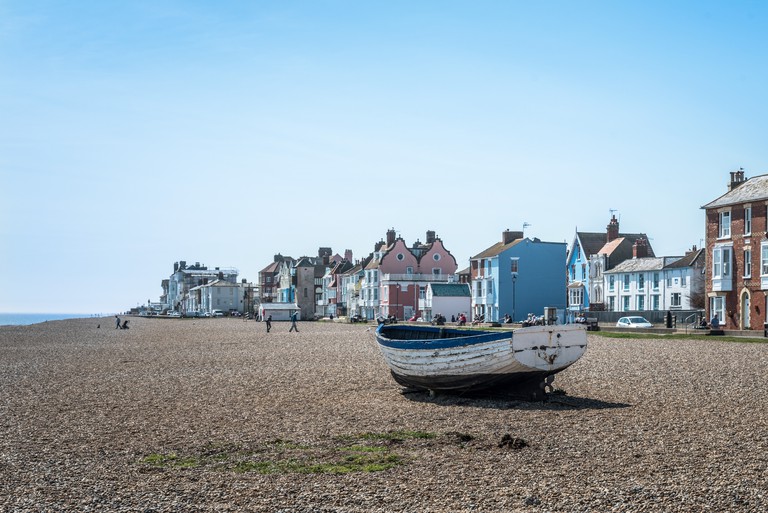 © Barbara Eddowes / Getty Images
Maggi Hambling’s Scallop sculpture is far from being the only quirky structure along the sand and shingle beach fronting the cultured town of Aldeburgh. Rusting anchors, decrepit boat hulks with peeling paint, a Martello tower and converted windmill are just some of the other elements that make a day spent here so memorable. Out at sea, the shingle spit of Orford Ness adds to the serene setting.
Open In Google Maps
Crag Path, Aldeburgh, IP15 5BP, United Kingdom
Visit Website
Give us feedback 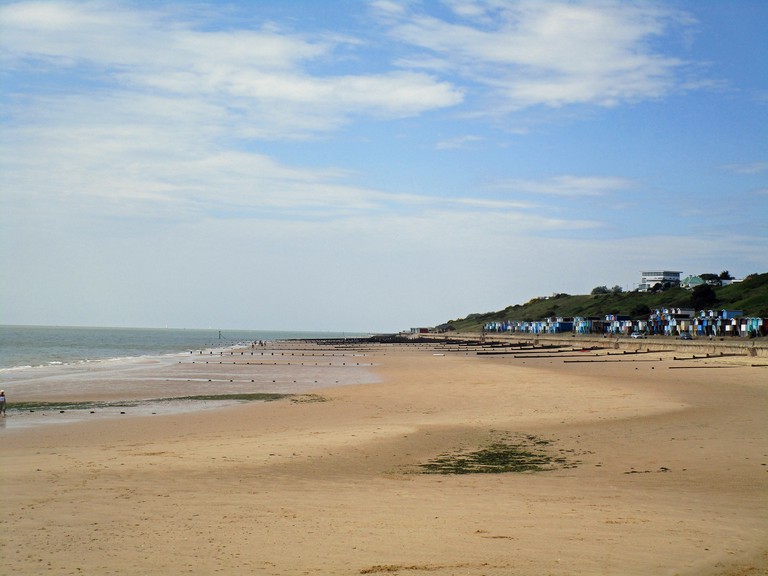 © Laurence Berger / Getty Images
The beauty of this little slice of upper-crust Essex is straight out of a postcard. A traditional clocktower, thatched toilet block and neat-as-a-pin shelters are part of the appeal, but the beach itself – bustling with colourful cabins and partially backed by a cliff – is the real draw.
Open In Google Maps
Frinton-on-Sea, England, CO13 9JT, United Kingdom
Give us feedback 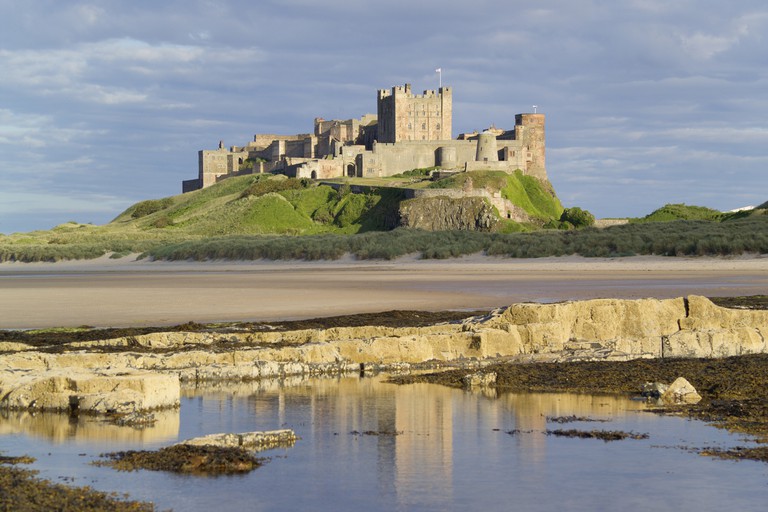 © P A Thompson / Getty Images
The soft white sands and white-crested breakers of sweeping Bamburgh Beach, a half-hour drive south of Berwick-upon-Tweed, will transport your toes to the Caribbean while keeping the rest of you firmly in Norman England – courtesy of the 12th century Bamburgh Castle backing the pristine beach. Take a boat to the Farne Islands, visible from the beach, to see seals and seabirds, or walk north to Stag Rocks for some old-school rock-pooling.
Open In Google Maps
Bamburgh, Bamburgh, England, United Kingdom
Give us feedback 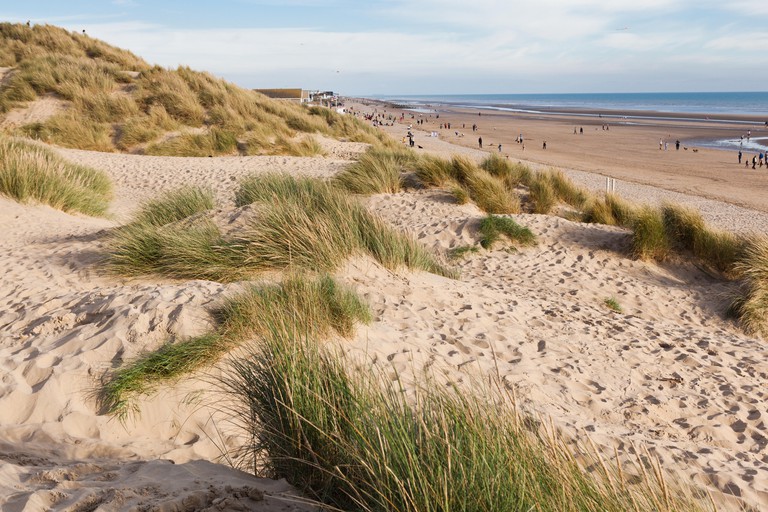 © Liliya Sayfeeva / Alamy Stock Photo
If you yearn for a desertscape but don’t want to board a plane to find one, Camber Sands makes a very acceptable stand-in. Its impressive dune system is kept in place by marram grasses and bleached chestnut fences; bring a picnic and listen to the wind in the grass while watching kitesurfers on the water and horseriders in the shallow waves.
Open In Google Maps
England, United Kingdom
Give us feedback 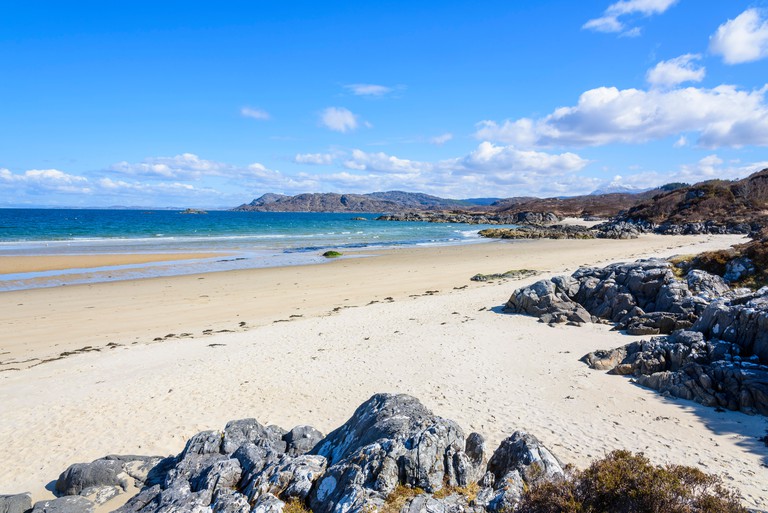 © Gary Cook / Alamy Stock Photo
Singing Sands Beach is a secluded stretch of sandy beach backed by dense forest full of flora and fauna. The beach got its name from the unique sound the sand makes when the wind blows over the top of it, which can also be created by dragging your feet through it.
Open In Google Maps
Unnamed Road, Achateny, Acharacle, PH36 4LG, United Kingdom
Give us feedback 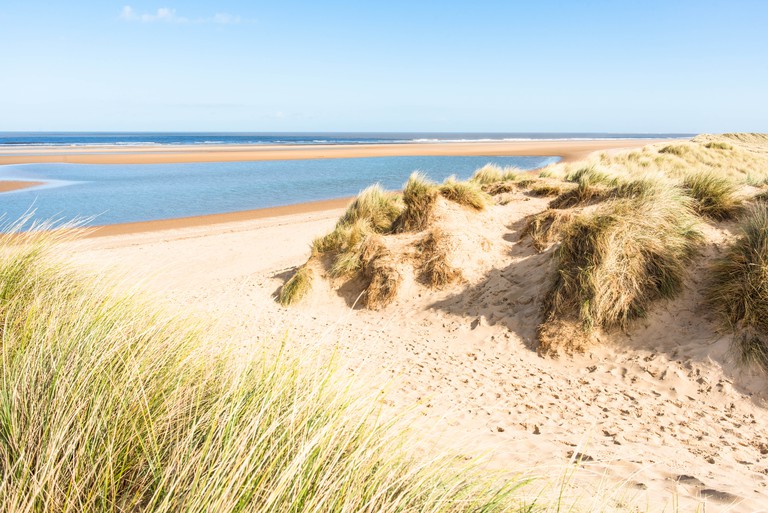 © Andrew Michael/robertharding / Getty Images
Holkham proves there’s no need to go abroad to find the ideal beach. Even before you reach the vast swathe of soft sands, set in a nature reserve, the scene is idyllic. A pretty boardwalk winds through pine woodland and dunes to a picture-perfect scene, one in which seemingly endless strips of sky, sand and sea painted across the horizon make you feel you’ve found paradise.
Open In Google Maps
Holkham, Wells-next-the-Sea, NR23 1RG, United Kingdom
Visit Website
Give us feedback

Let the smoothing smile of the sun wash any stresses away and head to one of these secret sunset destinations in the UK.