11 Christmas Films to Get You in the Seasonal Mood

We know that many Christmas movies can be kind of corny, but only because they’re so unabashedly uplifting. The holidays are a time of year during which you are allowed to indulge. So bake a batch of Christmas cookies, put on your coziest Christmas sweater, and enjoy these 11 Christmas films to get you in the seasonal mood. 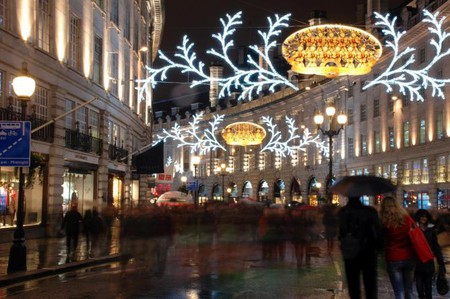 Elf (2003) starring Will Ferrell as Buddy the Elf just never gets old. Buddy is a naïve, happy-go-lucky human who was raised by elves in the North Pole. He always knew he didn’t quite belong and so he decides to descend from Santa’s Workshop in search of his true origins in Manhattan. We see the ever-innocent Buddy, perennially filled with holiday cheer, hilariously trying to navigate the rough and tumble elements of an increasingly cynical New York City. Somehow seeing how our archetypal holiday traditions would translate into modern times is endlessly entertaining, and calls us back to a sort of joyful truth that characterizes Christmas cheer.

It’s a Wonderful Life (1946) is truly a classic. Released in 1946, its moving story has certainly stood the test of time. The plot begins when protagonist George Bailey, played by James Stewart, wishes that he’d never been born. We learn that Bailey has always sacrificed his own dreams in lieu of others’ needs. On Christmas Eve, he kills himself only to be met with divine intervention by Clarence Odbody, his guardian angel. The story takes us through what life would look like without Bailey, thus causing him to realize how integral his existence is to other people’s happiness. With the full weight of his significance in the lives of others made apparent, Bailey’s selflessness becomes a source of joy and abundance for the first time on the following Christmas morning. 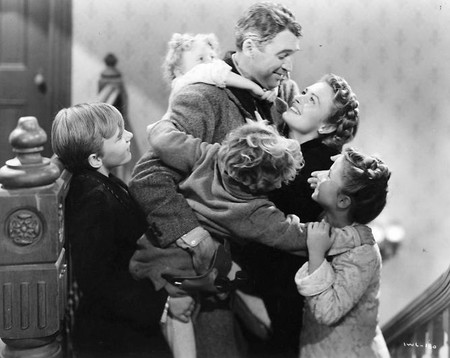 One of the most hilarious cross sections into suburban life in the 1950s, A Christmas Story (1983) is not a film to be missed. The movie centers on Ralphy, an earnest and humorously imaginative young boy who desperately wants a Red Ryder BB gun for Christmas. He employs every persuasive tactic he can think of to get himself one, yet he is continually met with rejection on the condition that various elders in his life believe he’ll shoot his eye out. The film depicts what many American holiday adages: family dinners gone awry, going to the mall to see Santa, the magic of a white Christmas, and getting an ugly outfit from a well-meaning loved one. Even if you haven’t experienced these things, the movie will inspire you with the childlike giddiness of the fast-approaching holiday season. 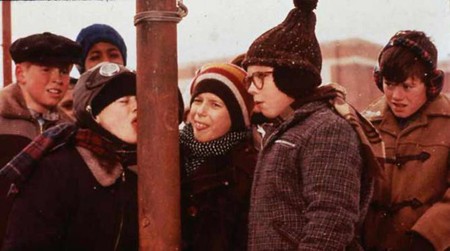 A Christmas Story | Courtesy of Metro-Goldwyn-Mayer

Charlie Brown Christmas (1965) is another oldie but definitely a goodie. Charles M. Schulz’s Charlie Brown & the Peanut Gang star in this made-for-TV Christmas special with music by the legendary Vince Garabaldi Trio. Charlie finds himself depressed by the greed and over-commercialization of the holidays. When prompted to buy a Christmas tree for the annual Christmas pageant, Charlie insists on buying the only wooden tree available, a tiny sparse sapling. Unsurprisingly, his classmates are angered and disappointed with the little tree. Charlie’s persistence diminishes when he attempts to decorate the tree and its tiny branches wilt under the weight of even one ornament. Just then, Charlie’s classmates enter and realize the endearing quality of the tree and fix it up for him. When Charlie returns to the scene he is met with the iconic Merry Christmas Charlie Brown! What a classic! 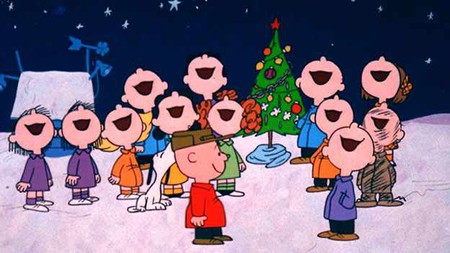 A slightly less obvious Christmas film is Tim Burton’s Batman Returns (1992). In actuality, the plot of Batman Returns takes place during Christmas in Gotham. Specifically, the Penguin’s meddling begins when he and his cronies kidnap important business figure in Gotham at the city’s annual Christmas tree lighting ceremony with the hopes that he will help him become a citizen of the city. More mischief ensues during Gotham’s holiday festivities, but you’ll just have to watch the movie to find out what they are. The film ends with a heartfelt exchange of ‘Merry Christmas’ between our hero Bruce Wayne (Michael Keaton) and his faithful servant, Alfred (Michael Gough). 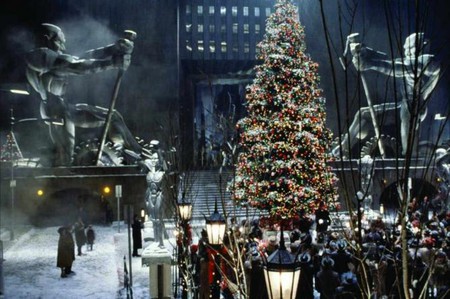 The Christmas lore surrounding Rudolph the red-nosed reindeer began way back in 1939. The 1964 stop-motion animated special by Rankin/Bass is one you can’t miss during the holiday season. Rudolph, the Red-Nosed Reindeer (1964) was filmed entirely in Japan, but its audio was done in Toronto. The plot is an elaborated version of the original story we all know and love. In it, Rudolph decides to run away from home with other social outcasts, an elf by the name of Hermey and a burly mountaineer named Yukon Cornelius. The iconic Sam the Snowman narrates the film. He is even referenced in Elf. Its themes, which grapple with ideas of acceptance and belonging, in combination with its polar setting, make it a quintessential film for Christmas. 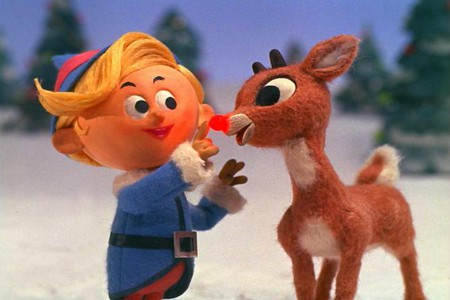 How the Grinch Stole Christmas

You’ve got to have a little Dr. Seuss in your Christmas season. Not only because he is so closely linked to many of our childhoods, but because he wrote How the Grinch Stole Christmas! (2000), and it has been adapted into multiple TV specials and in 2000, into a feature film starring Jim Carrey. The movie chronicles highly bitter and cruel outsider, the Grinch, in his plan to ruin Christmas in Whoville. He sneakily devises to steal all the Christmas gifts, foods, and decorations from the city on Christmas Eve. Meanwhile, the exceedingly cute little Cindy Lou Who feels disheartened by the way that her town has become so preoccupied with the material aspect of Christmas. She feels compassion towards the Grinch. In the end, her kindness wins out over the Grinch’s cynicism and the moving display of the true meaning of Christmas brings the community together for the right reasons. 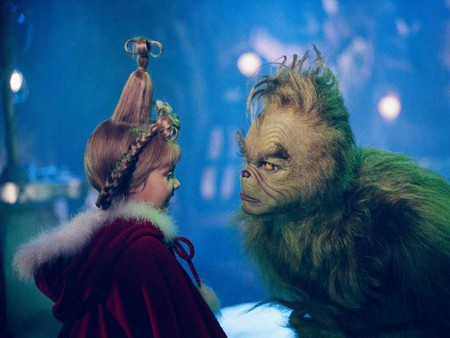 Hogwarts School of Witchcraft and Wizardry really knows how to deck the halls. Watch the young cast in the premiere film of the series light up as they experience their first Christmas at the wizard school. The enormous Christmas trees, abundant glowing lights, snow-covered school, and of course the Hogwarts Christmas feast are sure to make you want to get started on your own Christmas traditions. At least you’ll probably be wishing that Mrs. Weasley made you your own monogrammed sweater. In all honesty, it’s best to just watch all the Harry Potter films this Christmas season because they make for great holiday movie marathon material. 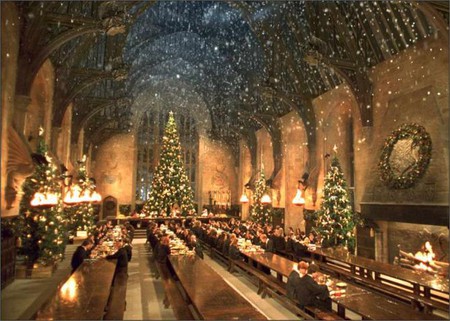 In The Santa Clause (1994), Tim Allen stars as Scott, a recently divorced single father who wants to make Christmas with his son special. This is until he encounters a man dressed as Santa Clause who wakes him by making a raucous on the roof of their home. This apparent Santa imposter is startled by the confrontation causing him to fall from the roof to his death. For his son, Scott puts on the man’s Santa costume and finishes the associated duties that come along with being Santa Clause. What he does not realize, however, is that being Santa is actually only a matter of costume. He begins to grow profuse white facial hair and to acquire a jolly Santa belly as a result of his newfound appetite for milk and Christmas cookies. You’ll have to catch the movie to see the holiday hijinks that follow. 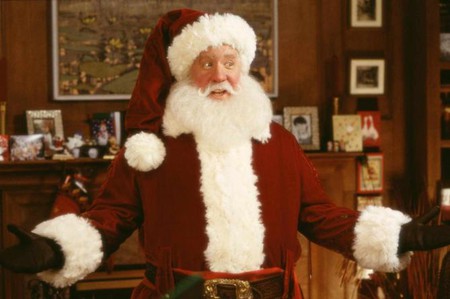 Everybody loves a romcom, and this 2003 British Christmas-themed movie is a real heart warmer. The star-studded cast is stacked with the likes of Hugh Grant, Liam Neeson, Emma Thompson, Keira Knightley, and many more. Love Actually (2003) begins as Hugh Grant’s character, David, explains that when he feels down, he thinks of the Heathrow airport terminal when loved ones are reunited. He explains that this pure, uncomplicated love moves him. The film is subsequently comprised of the love stories of several different couples, all of which are connected to Christmas holiday festivities. Between the Christmas cheer, and the romance, and the witty British humor, this film will have even the biggest Grinch believing in the sway of the Christmas spirit. 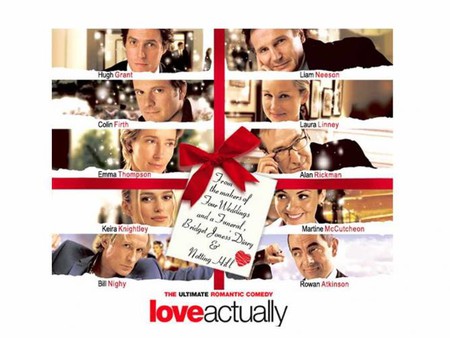 Jingle All the Way

Starring Arnold Schwarzenegger, Jingle All the Way (1996) is a completely silly movie largely because Schwarzenegger is cast to play an earnest and helpless Midwestern father who feels he is falling short as a dad. This story takes viewers through melee after melee as Schwarzenegger attempts to buy his son the Turbo-Man action figure. The pressure is on as the story takes place Christmas Eve when nearly all toys are sold and shops are closing up for the holidays. It is a satirical play on the increasing materialism-fueled holiday season and the lengths people will go to get toys. It is funny and cringeworthy in such a way that serves as a cautionary tale about how not to approach the holidays.