Looking back at just how wacky kids’ TV was in the 80s, it’s amazing that we all turned out as the well-adjusted members of society that we are. British tea-time programming of the era is even more bizarre that we remember it being, as you can see from this pick of uniquely localised content from the time. Let nostalgia reign!

The animation doesn’t really match up to the likes of Thundercats or He-Man and the Masters of the Universe, which were also popular at the time, but this late 80s cartoon which ran for four seasons definitely had the edge when it came to humour.

Adding to the mystique of the show, the titular vampire became a vegetarian, with a mumbling nanny for company. Cosgrove Hall Films produced the series for Thames Television, and the lineage between the cartoons was completed by David Jason (of Only Fools and Horses fame) voicing both the main characters.

Pre-dating Count Duckula by several years, this espionage-themed cartoon was recently rebooted, but nothing can match the original.

Full of gadgets, glamour and James Bond-style plots, Danger Mouse was a one-eyed rodent who fought off the evil Baron Silas Greenback. The show was originally intended to have a more serious tone, as witnessed by the pilot episode, but just how were we meant to not laugh at the antics of the odd couple at the heart of the show, who were given orders by a giant chinchilla?

The depressing reality is that the older, fatter and balder we kids of the 80s get, the more we end up looking like ultimate nerdlinger Penfold. 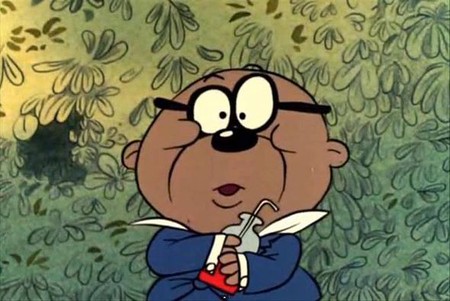 Further evidence that the 80s are back with a bang came when this kids’ adventure quiz was turned into a live adult-orientated stage show.

Fascinatingly, the show, which saw different teams take on the game, was almost impossible to beat. A player was set loose in the computer-generated world and directed by his or her friends from afar. The Dungeon Master was often as much of a hindrance as a he was a help.

Now seen as a cult classic, the show was one of the first to embrace virtual reality and now looks like it was ahead of its time.

When Gerry Anderson returned to the small screen after almost a decade away, he followed up his popular Thunderbirds and Captain Scarlet series with another puppet sci-fi adventure. The Supermarionation technique Anderson was famous for was once again employed to combine electronically augmented marionettes with live-action footage.

This was a far more polished effort than previous shows, and saw an alien invasion being constantly fought off by the Terrahawks organisation.

Zelda, the leader of the invading forces, is still the stuff of nightmares.

Originally devised by Mike Young to help his son overcome his fear of the dark, SuperTed eventually became so successful that Warner Bros. offered a substantial sum of money to turn the character into a film.

The offer was rejected in favour of keeping the character, and show, honest to its Welsh roots.

Ted was a defective toy bear, thrown away by a factory on production, who is discovered by Spotty the alien and given special powers by Mother Nature. Texas Pete was the usual villain of the piece, and the series maintained its British sensibility even after it was rebooted in 1989 by Hanna Barbera.

If SuperTed was the serious attempt at bringing superheroes to the small screen, then Bananaman was the Carry On version to elicit laughs. The preposterous concept, summed up perfectly by the intro, tied into the utterly British tone of the show.

Originally a comic strip, the series told the tale of Eric Wimp who would gain superpowers whenever he ate a banana and turn into the bumbling yellow crusader.

There have been rumours of a film adaptation for a number of years, so it will be interesting to see what international audiences make of what is essentially a seaside postcard character on the big screen.

Growing up in London, this show was the first exposure many of us had to the ‘North’.

The theme tune, a version of 1936’s ‘The Acrobat’ became synonymous with the series, the opening wailing trumpet sound would echo across schoolyards at every break time.

This was our version of US shows like Wonder Years, and although it hasn’t aged as well, it remains surprisingly accurate in portraying the pre-teen years of many youngsters during the decade.

I’m not entirely sure I can remember what this programme was actually about, but I do recall popular magician Paul Daniels being responsible for it all.

Wizbit was a large wizard’s hat, from another planet obviously, who would use magic to solve puzzles. Partly educational in origin, the lateral thinking posters were fiendishly difficult to decipher and were another source of conversation amongst youngsters in classrooms across the country.

Rod Hull and Emu were already firmly established as TV stars, not least thanks to their memorable appearance on Michael Parkinson’s chat show which saw the usually unflappable interviewer lose his cool when attacked by the pair.

In 1981, this series introduced us to Grotbags, a green witch who was intent on stealing Emu for herself and using his special powers to control all the brats (her word for children). It also gave us the unforgettable catchphrase “there’s somebody at the door”, which will garner a pensive look in anyone of a certain age if chanted at the right time. Seriously, try it next time somebody rings the doorbell, and I guarantee at least one person will join in and subsequently slip into a story of how great the 80s were.

A personal favourite of mine, largely thanks to its risqué humour and pop-culture pastiches, Round the Bend was the talk of the playground the morning after every episode was broadcast.

If you imagine the manic sitcoms by Rik Mayall and Adrian Edmonson of the time, the likes of Bottom and Filthy Rich & Catflap, then add in a violent talking crocodile who lives in the sewers with a group of like-minded puppet reprobates, then you still aren’t anywhere near visualising the insanity of this show.

Not to be confused with the equally excellent, but entirely different, Round The Twist.

Something dreamt up in a fever dream after a night on Irn-Bru and fried Mars bars, this classic show about a granny with superpowers actually won an Emmy and was broadcast all over the planet.

The weekly adventures, if I recall correctly, were usually filmed in various locations around the North of England. For all the lo-fi action, we still think Gudrun Ure (who played the main character) would wipe the floor with Marvel and DC’s finest.

Somehow Super Gran was only voted as the seventh most Scottish person ever in a recent poll. Who was ahead of her?!?