10 Works By Hans Holbein The Younger You Should Know 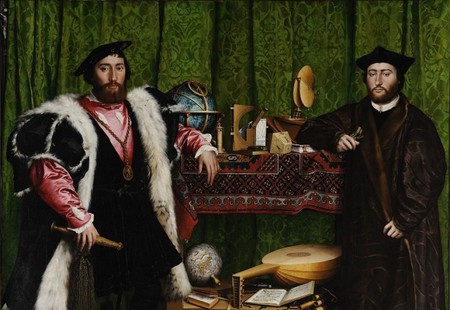 It is through the eyes of Hans Holbein the Younger that we see many of the figures of the court of Henry VIII. Like van Dyck in the next century, he is known largely as a documenter of the figures of the Royal Court in London. And yet Holbein’s works are much more diverse than this. Born in Augsburg in 1497 and trained by his painter father Hans Holbein the Elder, his works include religious paintings, mythological scenes and woodcuts for use in printed texts. Let’s look at some of his best pieces.

Holbein’s early work was carried out in Basel in Switzerland. The city was a center for the dissemination of humanist and later Protestant ideas. His Body of Christ in the Tomb is very much a humanist vision of Christ, laid out following the Crucifixion, as if we’re looking through the side of a coffin. Christ is emaciated and bony, his wounds clear, eyes still open and mouth gaping. This is Christ both dead and alive at once, with the power to speak to man and offer salvation. That grotesque quality is distinctively Northern Renaissance, and follows the method of Matthias Grünewald. Holbein is believed to have used a corpse dragged from the Rhine as a model. 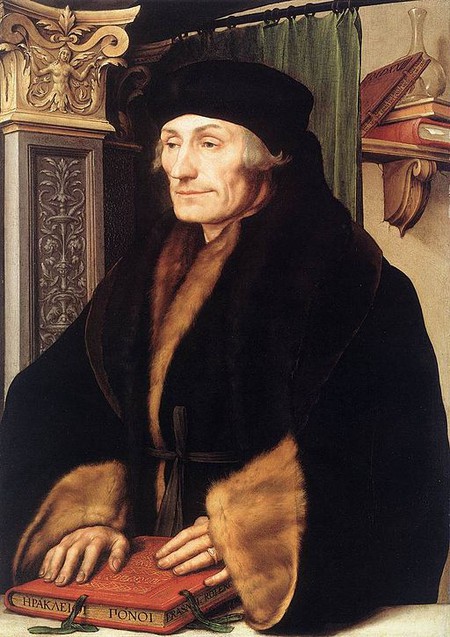 Portrait of Erasmus of Rotterdam, 1523

Erasmus was the great humanist scholar of the age. He worked in Basel from 1521, where he must have encountered Holbein. He needed images of himself to send to scholarly followers around Europe so he turned to Holbein for a portrait. In total, Holbein painted Erasmus three times, yet this is the most elaborate with the carved pilaster in the background and the fur intricately depicted on the scholar’s coat. Around him are the tools of his trade – the book in his hands his translation from Greek to Latin of the New Testament and on the shelf above him a volume with the Latin inscription saying ‘I am Johannes Holbein, whom it is easier to denigrate than imitate’. 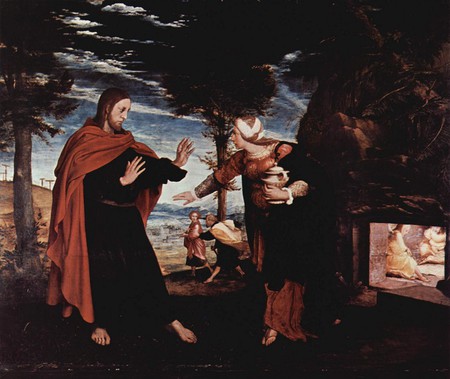 It isn’t clear where this was painted: perhaps in England, Basel or in France where Holbein visited in 1524 looking for work at the court of Francis I. The painting’s title echoes the words of Christ to Mary Magdalene when she recognizes him following the Resurrection – ‘Do not touch me’, he says. Titian and Fra Angelico also painted scenes inspired by the Biblical passage. We see Christ pushing Mary away, the tomb guarded by angels to one side, and in the background Saints John and Peter rush to Jerusalem to spread the news. The background and faces of the main figures have been called Leonardo-esque. Holbein had travelled to Italy around 1517 and may have encountered Leonardo’s works in France or those of his followers. The strict following of the New Testament scene may be a nod to Lutheranism. 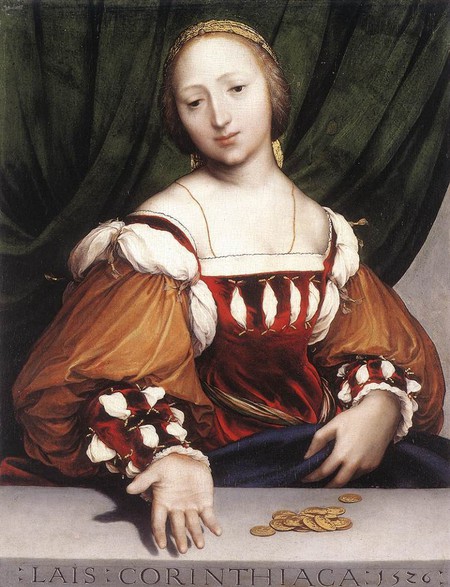 Those Leonardo-esque elements are clearer in this work, produced in Basel. It shows Lais, a courtesan of Ancient Greece said to have been the most beautiful woman of her age. Her face shows use of sfumato, a smokiness or wispy, ghostly rather than crisp rendering of features. It echoes Leonardo’s works – most notably the Mona Lisa, and illustrates the spread of technique from north to south in the Renaissance. Two years earlier Holbein painted Venus and Amor, his first mythical scene, which is very similar to Lais of Corinth. He used the same model, (thought to be his mistress Magdalena Offenburg) the same colors and techniques, and the same gesture with the figure’s hand stretched out to the viewer. 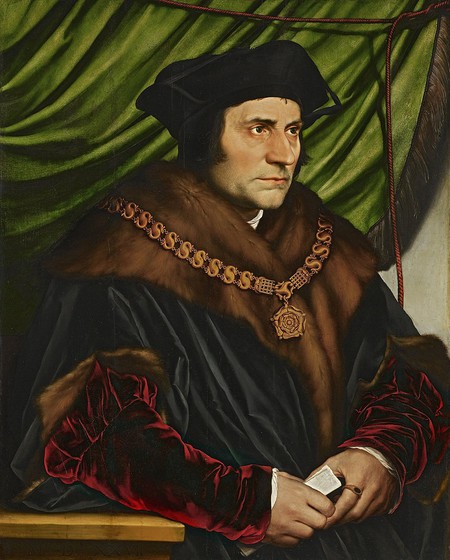 Erasmus was a key figure in Holbein’s career. He gave the painter a letter of introduction to Sir Thomas More in London. He headed there in 1526 and most likely lived with More until returning to Basel in 1528, working on portraits of his scholarly circle – men like Archbishop of Canterbury, William Warham, to whom the Erasmus portrait was probably sent. More was a philosopher, lawyer, author, Speaker of the Commons and future Catholic martyr. Holbein shows him in front of a Greek cloth, his immaculate robes trimmed with fur and the velvet sleeves portrayed with extraordinary verisimilitude. Around his neck is the Collar of Esses, a mark of his service to the King. Holbein also painted a group work of More’s family, though this has been lost. 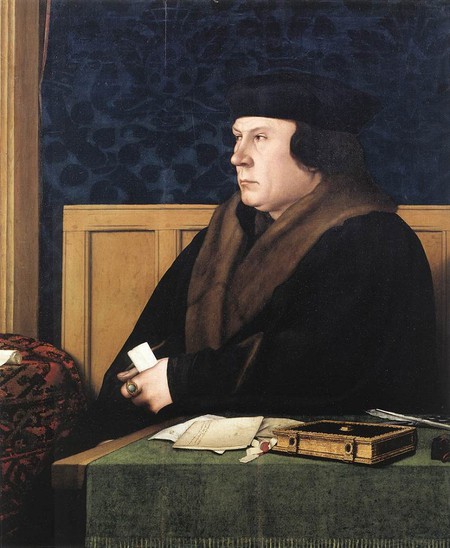 Holbein returned to England in 1532 to a new political environment. He distanced himself from More, now an opponent of the King’s religious policy and found patrons in the Boleyns and the new Chief Minister Thomas Cromwell. He is believe to have painted Anne Boleyn but this work has been destroyed, and also created anticlerical woodcuts for Cromwell. Three versions of this portrait are extant, all believed to be copies of a lost original. In it we see the great scheming Machiavelli of the court: a cold, joyless face with a severe expression and small pig-like eyes beneath his beetling brow – the face of Iago. In front of him we see legal documents, a devotional text, quill and scissors. 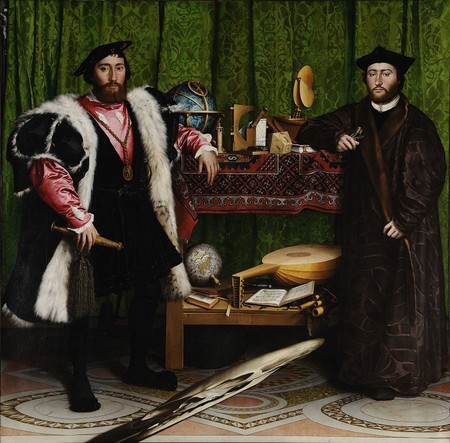 One of the most famous images of western art. The man on the left is Jean de Dinteville; on the right is Georges de Selve, Bishop of Lavaur. Both were French diplomats at the court of Henry VIII. The grand painting was commissioned by Dinteville, though its full symbolism remains mysterious. On the shelves between them are items of celestial measurement, then lower down a terrestrial globe and a lute with a broken string – an image of discord – and a Lutheran hymnal. It may be a plea for harmony in a crisis-racked Europe. Then there is the strange anamorphic skull at the front which can be seen only from a certain angle, and the crucifix peeking through in the top-left that suggest that for all the two men’s fineries there comes in the end only Death and the possibility of salvation through Christ. 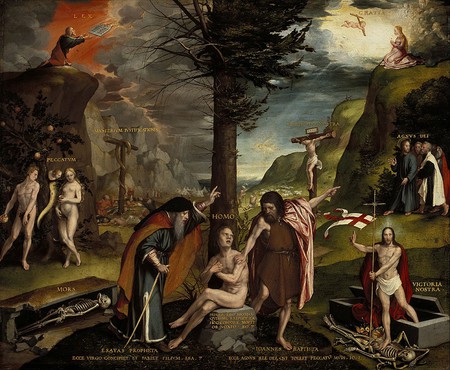 Holbein remained in England through the 1530s. Who commissioned this work is not known, but they must have been a subscriber to the Lutheran religion, for it illustrates the veracity of key Lutheran tenet of salvation through faith alone. In the center is man, stripped bare and marked by the term ‘Homo’. On one side is the Old Testament world – Moses receives the Commandments, there is the Serpent, there is Sin, and there is Death. On the other is the New Testament, to which Isaiah and John the Baptist point. There we find the Lamb of God, the Apostles, and the Risen Christ who triumphs over Death in eternal life in heaven. Put your faith in Christ, it says, not the discredited ways of the old Catholic Church. 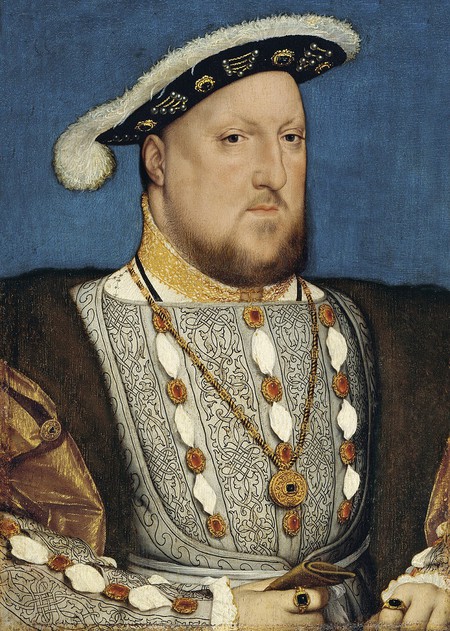 There’s an irony that though Holbein is eternally connected to Henry VIII, his most famous image of the king is known only through later copies. His life-size portrait of Henry, painted in 1537, was destroyed by fire. The only surviving image of Henry by Holbein’s hand is this earlier work, perhaps a preparatory piece for the fuller portrait. In 1536, Holbein became the King’s Royal Painter, in which capacity he also painted the infant Edward VI in 1538. In this portrayal of Henry we have the classic image of the middle-aged monarch – regally bedecked with jewels, but with a hint of menace in that small, cruel mouth — a man who sent two of his wives to the executioner’s block to lose their heads. 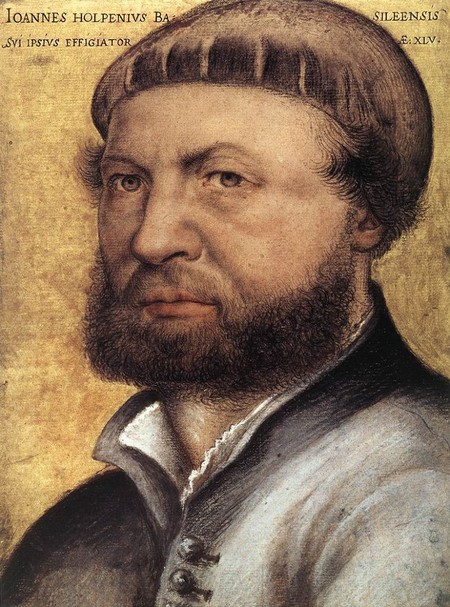 Cromwell fell in 1540, the third time Holbein had lost a patron after More and the Boleyns. Holbein had been responsible for the portrait of Anne of Cleves that sparked Henry’s interest in her only for the marriage to fail when he did meet her. This was to prompt the execution of Cromwell. Holbein stayed on working for courtiers in London where he died of the plague in 1543. His last work was this self-portrait, executed using a mirror allowing the painter to gaze straight out into our eyes. He worked here in chalk and pen, not paint, allowing him to depict each strand of his bristling beard. The gold background was added later.