10 Street Artists You Should Roam The World For

Sometimes, the way that street art is reported would make you believe that it was only Banksy creating fascinating, funny and thought-provoking street art. However, as this list shows, artists from Asia to America are using graffiti for their own ends. Whether they are making political statements or simply brightening up towns, discover 10 street artists from around the world whose work you must see. 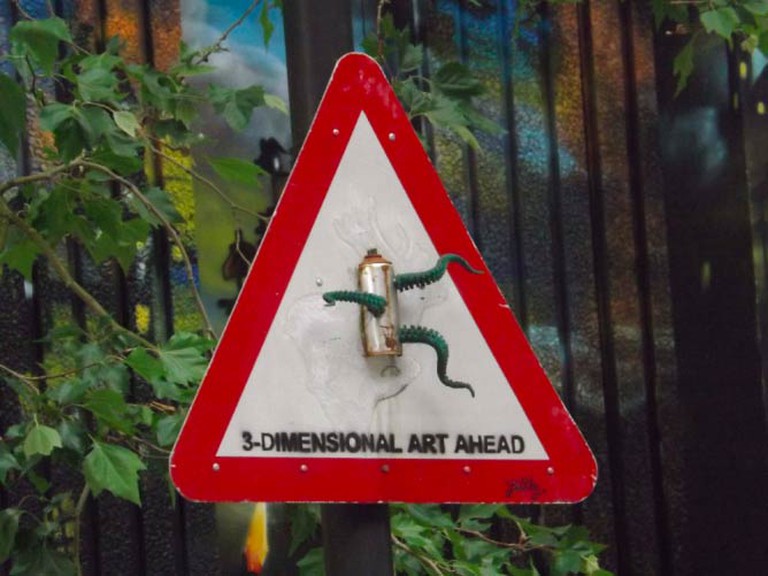 Sign at entrance of 'See No Evil' Graffiti Project, 2013 | © Samuel Spencer
Rather than being the work of one individual artist, See No Evil is Bristol’s ambitious attempt at the world’s largest outdoor gallery, with over 30 mostly large-scale pieces decorating the otherwise dull Nelson Street. Although currently being heavily renovated, the street shows us how the best street art can turn the world into an art gallery with thrilling results. After all, it has gone from unremarkable road into the center of Bristol into a major tourist attraction, with people coming from all around the area to see pieces including everything from mural of superheroes to building-sized mother and child scenes.
Open In Google Maps
Nelson Street, Bristol, England, United Kingdom
Give us feedback

Known for his playful takes on the defining pop culture figures of our age, many of Pegasus‘ best works are mash-ups. From his imagining of Rihanna as an Egyptian goddess to his ‘legends mash-up’ in Shoreditch that imagines Madonna, Elvis, Cher, Bowie, Gaga and Janet Jackson as one super pop culture entity, his work can be found across London. An anonymous artist working in London but originally from Chicago, Pegasus’ work is a fun take on our media-saturated age, and graffiti hunters can find it across King’s Cross, Shoreditch, Camden, Lambeth and Hackney.

Although we know more about Mr Brainwash than many other street artists, he still remains one of the scene’s biggest enigmas. Paris-born, LA-based artist Thierry Guetta is the man behind the MBW tag…or is he? After his involvement in the Banksy pseudo-documentary ‘Exit Through the Gift Shop’, many speculated whether Mr Brainwash wasn’t just another face of the famously mischievous Banksy. Whether you agree with them or not, the work of the MBW brand is well worth tracking down, with its twists on famous images from art and pop culture appearing all over the world. 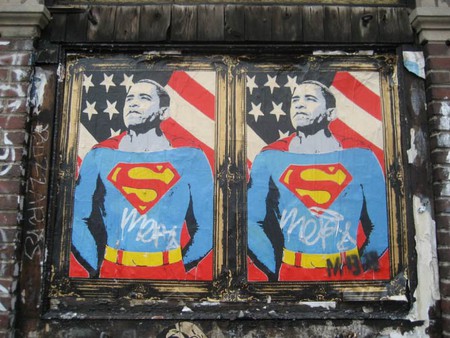 Graffiti gets by far the most coverage, but there’s far more to street art than just walls and paint. Principal among the other forms is yarnbombing, which uses knitting as its media, and which was invented by Texas-born Magda Sayeg. A unique take on what is seen by many as a staid art form, her work has adorned everything from buses to buildings, and has been seen across numerous continents, in galleries, brand collaborations and, of course, still on the streets, where Sayeg and her followers have made crochet cool. 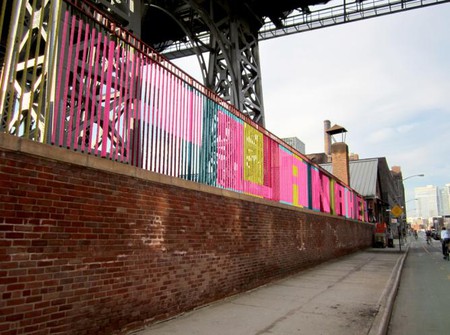 Born in Paris, Victor Ash began as a graffiti artist in the ’80s, working within the traditional forms that developed in New York in the preceding decade. It is his later work, however, that makes him one of the world’s most remarkable street artists. Eschewing the graphics, colors and tags of the NY scene, Ash now does epic-scale pieces such as his ‘Astronaut Cosmonaut’ in Berlin, a figurative giant astronaut that comments on modern youth culture and the urban experience. Now based in Copenhagen, visitors to the city will remember his large depictions of nature set against the cityscape. 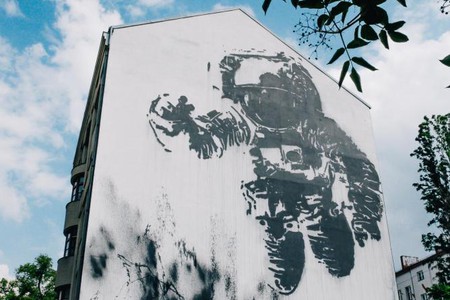 With its muted colors, deceptively simple style and uncomplicated images, Escif’s work is a triumph of substance over style. As well as his work featuring throughout his home town of Valencia, it has began to appear across the world, offering uncomplex but devastating critiques of WikiLeaks, gentrification and the crisis in the Eurozone amongst many others. Most famous for his giant lightswitch, painted in Katowice in Poland, it is Valencia that street art fans are advised to visit to get a concentrated taste of Escif’s unique, satirical style across the whole of the Spanish city. 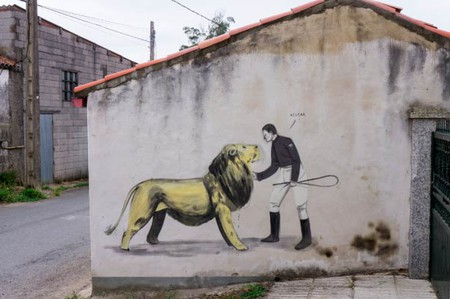 As any lusophones may have already worked out, Os Gemeos (‘the twins’ in Portuguese) are a pair of identical twins, the Pandolfo brothers, based in São Paulo, Brazil. As well as their small-eyed figures being unmistakably the work of the Pondolfos, they were also crucial in the development of a uniquely Brazilian aesthetic in the world of street art, which combines the original hip hop aesthetic from New York with an extensive range of Brazilian folklore and local commentary. This style has been most strikingly used in a series of murals by the artists that can now be found across the globe. 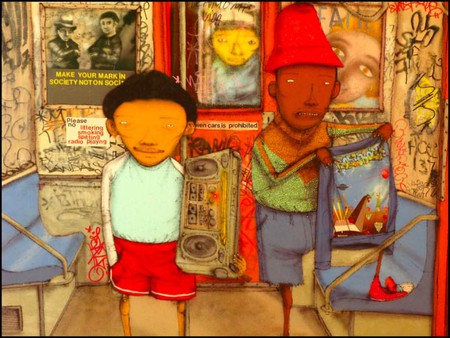 Many street artists make political work, but in no-one’s work does it feel as urgent as in Ganzeer‘s. With his finest, most controversial work a direct response to the 2011 Egyptian uprising, he often depicts martyrs, as well as making harshly critical swipes at the Supreme Council of the Armed Forces that now rules the country. Political street art was rare to non-existent pre-Arab Spring, but now it is prolific, with Ganzeer as its most famous figure internationally. Seeing himself as separate from many street artists who he says think in different terms to his, his work on the streets is nevertheless his most incendiary and his most fascinating. 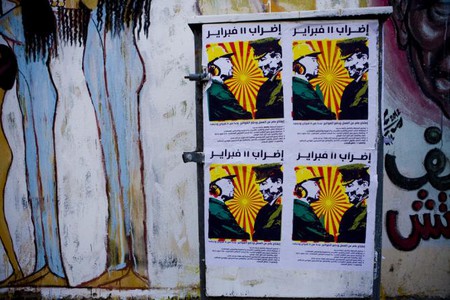 Another artist who looks beyond paint to create her work, Swoon (born Caledonia Curry) creates life-sized portraits which are usually glued on abandoned locations using wheatpaste, which gives her works a life of their own. As the work ages, fragments of it comes off and the works rip or tear, meaning they age quite unlike conventional graffiti work, giving them their own fascinating aura halfway between disposable poster and permanent artwork. Her works are often of friends and family, also creating interesting juxtapositions between the domestic and the urban, which just adds yet another layer to her work. 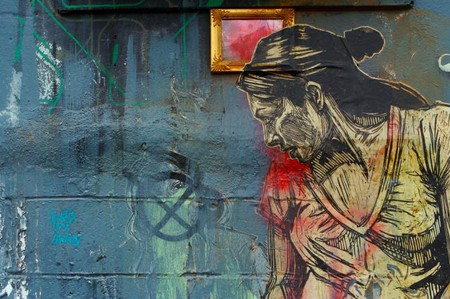 Born in a country known for its often draconian laws against what its state calls ‘vandalism’, it is a surprise that Singapore birthed as fascinating an artist as Sheryo. Whether working alone or as part of the group The Yok, Sheryo paints characters who (to quote the artist herself,) ‘might cause skitter skatter explosions in the brain’. With her work often exploding with colour and surrealism, she is the complete apotheosis of her home country’s respectability, and we as art lovers are all the better for her rebellion against this. 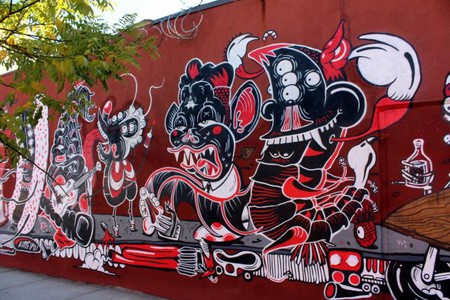 Bushwick, Brooklyn: Sheryo and The Yok | © Wally Gobetz/Flickr
Give us feedback