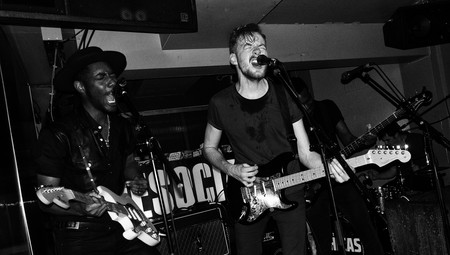 Just a few years ago, the British music press declared the death of indie, but a new generation of are forcing critics to eat their words. From the Weezer-esque slacker rock of The Magic Gang to the female-fronted Black Honey’s grunge-laden sound, we introduce 10 rising indie bands to keep an eye on in the coming months.

Black Honey — a Brighton four-piece formed by members Izzy Bee, Chris Ostler, Tommy Taylor, and Tom Dewhurst — arrived on the scene over the summer months, eschewing regular publicity antics in favor of the more enigmatic approach of letting their tracks, accompanied by their signature TV-themed artwork, do the talking. And it’s worked; despite the mystery surrounding Black Honey, critics are hailing them as one of the most exciting bands of 2014 and their popularity will no doubt surge through the next year. Their debut EP, released in late October and marked with a secret sell-out show in their hometown, features previously released singles including the dark ‘Teenager’ and grunge-influenced ‘The Taste.’

Despite still being in their teens, punk-tinged indie outfit The Bulletproof Bomb are more than proving their worth with their own brand of infectious guitar-driven tracks. A self-released debut single featuring tracks ‘Suitcase’ and ‘Spaceman,’ recorded and mixed by the legendary Rory Atwell at East London’s floating recording studio Lightship95, garnered the band praise from Zane Lowe, who gave the single a ‘next hype’ play on his BBC Radio 1 show. Soon after, they had slots at Leeds & Reading Festival, Bestival, and Ibiza Rocks the Snow. Their distinctive vocals and punk energy are attracting a growing fan base, and a busy gig schedule looks set to propel the band to the forefront of the UK music scene.

Since winning the Hard Rock Rising Global Battle of the Bands competition in 2013, The Carnabys, a five-piece band from Richmond, London, have become the darlings of the UK music press, hailed for lead singer Jack Mercer’s soul-baring lyrics and the bands’ thumping guitar and rhythm section. High profile gigs including playing the 2014 Isle of Wight Festival and supporting Blondie on the UK leg of their tour has helped cement The Carnabys as future stars. Meanwhile, their debut album, No Money on the Moon, is brimming with what the band are fast becoming known for: energetic and melodic rock at its best.

Hailing from Liverpool, Circa Waves are an indie rock quartet formed in 2013, who in their short time as a band have already achieved accolades including BBC Radio 1’s Zane Lowe, selecting their single ‘Stuck in my Teeth’ as his Hottest Record in the World. Their energetic, upbeat brand of garage rock has drawn comparisons to the likes of The Vaccines and The Strokes. Having spent the 2014 summer playing festivals across the globe, including the UK’s Latitude Festival, Australia‘s Splendour in the Grass, and Japan’s Summer Sonic, 2015 will see the release of their debut album Young Chasers.

Formed just a little over a year ago in their hometown of Newcastle, Coquin Migale are Alex (guitar and vocals), Matthew (guitar), Stevie (bass), and Dan (drums). They are currently rocking the Newcastle music scene, attracting favorable reviews from local magazine Narc and further afield with their sharp, alt-rock sound. Coquin Migale released their debut EP Yellow Room in 2013 and will be followed up with a single scheduled for release in early 2015, which has already received airplay from DJs including Gary Crowley and Tom Robinson. With gigs in London and a slot on The Great Escape Festival lineup beckoning, the lads from Newcastle look set to hit new heights in 2015.

With their infectious melodies, clever lyrics, and a New Wave-esque sound that falls somewhere between Talking Heads, Orange Juice, and Franz Ferdinand, the four-piece band Flyte is quickly gaining a cult following on the indie music circuit, as well as airplay from BBC Radio 1 DJs Zane Lowe and Fearne Cotton. Formed in Hackney in 2013 and consisting of members Will Taylor (vocals, guitar), Sam Berridge (guitar, keyboards), Nick Hill (bass), and Jon Supran (drums), Flyte saw success with their first single ‘We Are The Rain,’ mixed by Dan Grech-Marguerat. Following its release, they booked a summer of festival performances including Wilderness and Leeds & Reading, finished up their first headline tour of the UK in early November 2014, and released their vinyl-only EP Diamond White in December.

Describing themselves as ‘melody makers’ and ‘vibe crafters,’ The Magic Gang are a Brighton-based four-piece whose catchy lyrics and compelling melodies delivered with their signature laidback approach (see ‘She Won’t Ghost’) have earned the band comparisons to Weezer. A series of sell-out shows supporting acts including Birmingham’s Swim Deep and Australian indie-folk songstress Courtney Barnett have established The Magic Gang as the most hotly-tipped indie slacker rockers of their peers, and their self-deprecating lyrics and infectious guitar can be heard at DIY Magazine’s new music showcase Hello 2015 in London.

Birmingham foursome Superfood’s predilection for Britpop at its prime is clear, and their classic indie melodies and vocals have the band hailed as 1990s Britpop revivalists with a sound reminiscent of the likes of Blur and Supergrass. A solid reputation as a lively, crowd-pleasing act saw the band signed to Infectious Music and the subsequent release of their debut EP MAM earned a flurry of favorable reviews. A succession of gigs including the NME New Breed Tour and a sell-out headliner in their hometown in late 2014 have established the band as future indie stars. Superfood’s debut album, Don’t Say That, released in November.

Female-fronted four-piece Wolf Alice hail from North London. Formed in 2010 originally as a twosome consisting of Ellie Roswell (vocals and guitar) and Jeff Oddie (lead guitar), their name derives from a short story by feminist novelist Angela Carter. Bassist Theo Ellis and drummer Joel Amey completed the quartet in 2012 and a subsequent single release of ‘Leaving You’ received attention from BBC Radio 1 and NME, while 2014 brought about a knockout performance at Glastonbury, their signing to Dirty Hit Records, and the release of their third EP, Creature Songs, to rave reviews. In 2015, Wolf Alice’s signature grunge-pop sounds will return on their highly anticipated debut album.