10 Artworks By JMW Turner You Should Know 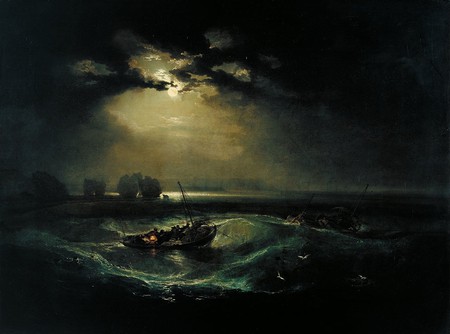 Joseph Mallord William Turner (1775 – 1851) was an English painter whose Romantic works featured some of the best landscapes of the 19th century. Turner painted from a young age, and he found inspiration for his works through travels around the UK and abroad. An expert at producing riveting atmospheric artwork, Turner lived a rather secretive life. Get to know the man behind some of the most quintessential landscape paintings of all time through these ten artworks.

Fishermen at Sea was Turner’s first oil painting exhibited at the Royal Academy in 1796. Drawing inspiration from famous English painters before him, Turner created this moonlit scene with the pure force of nature at the forefront. The small fishing boat, with the subtle light of the lantern, is at the mercy of the oppressively dark waves of the sea. The rocky silhouettes on the left of the painting are The Needles, a row of rocks off the Isle of Wight. At the time of its exhibition, critics said the painting was the work “of an original mind.”

Like other Romantic painters, Turner loved to portray natural catastrophes. This work was exhibited in 1805, and it is now held in the Tate Britain. This painting again portrays the sea as an elemental force not to be reckoned with. It is not known whether this painting is based on a real shipwreck or the fictitious one of an 1804 poem by the same name, penned by William Falconer:

Again she plunges! hark! a second shock
Bilges the splitting vessel on the rock—
Down on the vale of death, with dismal cries
The fated victims cast their shuddering eyes
In wile despair; while yet another stroke
With strong convulsions rends the solid oak. 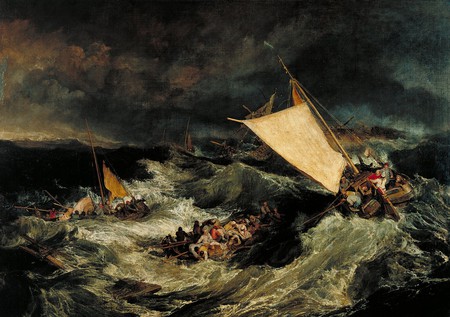 This painting, created in 1813, portrays the stark winter landscape of a scene Turner saw while traveling to Yorkshire, and it is said Turner’s daughter Evelina is present in the painting as well as his “crop-eared bay” horse, who is pulling the cart. Turner never sold the painting; possibly the work had sentimental value to him because of the personal elements included. Claude Monet said Frosty Morning was painted with “wide-open eyes.” 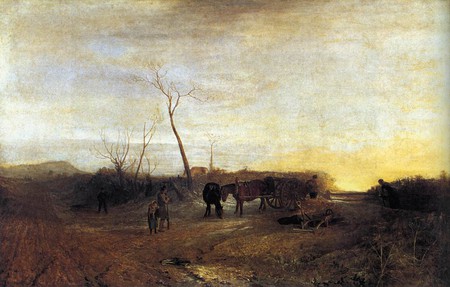 Dido Building Carthage, or The Rise of the Carthaginian Empire

Turner referred to this painting, exhibited in 1815, as his chef d’œuvre, or masterpiece. The oil on canvas painting portrays Dido (in blue and white on the left) directing the builders of Carthage, a classical image from Virgil’s Aeneid. Its companion piece, The Decline of the Carthaginian Empire, was produced by Turner and exhibited two years later. Claude Lorraine was a large influence in Turner’s work on these classical landscapes. In one of his last ever exhibitions, Turner included four works on the theme of Carthaginian subjects. 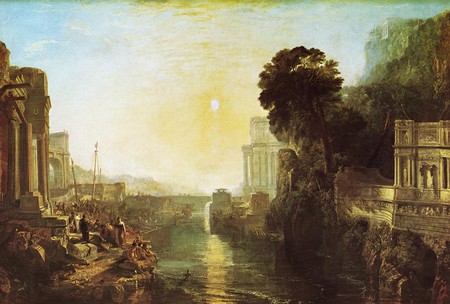 Dido Building Carthage, or The Rise of the Carthaginian Empire | © JMW Turner/WikiCommons

Dramatizing historic events became a new theme for Turner to work with. This painting, exhibited in 1812, shows Hannibal’s soldiers crossing the Alps in 218 B.C. Nature is an indomitable force again: a black storm cloud is descending on the troops while a white avalanche tumbles down the mountain on the right. A faintly lit sun struggles to break through these unlucky forces, and in the far-off distance is an image of sunny Italy. Hannibal is not clearly shown in the work, bringing more attention to the struggling soldiers than the leader. 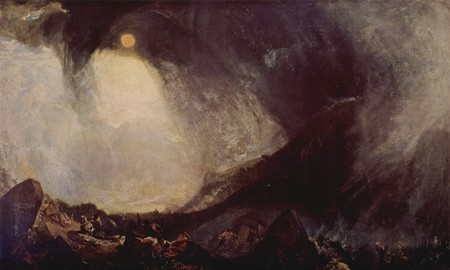 Snowstorm: Hannibal and his Men crossing the Alps | © JMW Turner/WikiCommons

After a tribute to the dying industry of sailing ships in The ‘Fighting Téméraire’ Tugged to Her Last Berth to Be Broken Up, Turner made this painting in 1844 to show his great interest in changes made by the Industrial Revolution in Britain. The Great Western Railway was a private British railway company that was working to develop a more efficient mode of transportation. The location of this painting is believed to be Maidenhead Railway Bridge across the river Thames. In the bottom right of the painting, a hare runs along the track, a hint of the natural element of Turner’s former works. 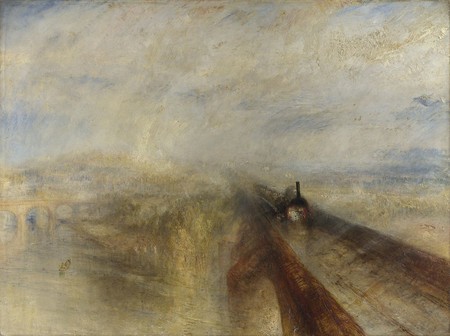 In his later life, Turner lost his interest in recreating the details of cresting waves and ships. Instead he focused on color, atmosphere, and light, as seen clearly in this painting. These paintings, produced later in his life, show a fluid movement of abstract color. Turner was interested in capturing the atmosphere of a moment, in this case a sunrise, rather than the physical objects. Turner painted this scene of Norham Castle many times throughout his life, clearly showing his transformations in style. He visited it on his one of his early trips to the north English countryside in 1797. View his other paintings of Norham Castle here and here. 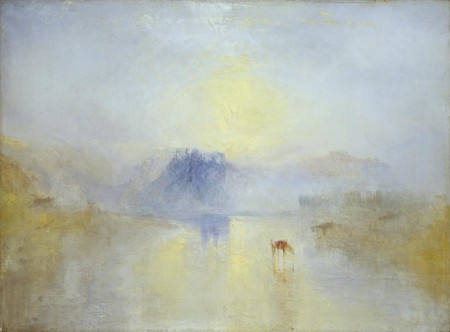 Turner exhibited this painting of a slave ship in 1840, and he showed it with an extract of an unpublished poem of his, Fallacies of Hope (1812):

“Aloft all hands, strike the top-masts and belay;
Yon angry setting sun and fierce-edged clouds
Declare the Typhon’s coming.
Before it sweeps your decks, throw overboard
The dead and dying – ne’er heed their chains
Hope, Hope, fallacious Hope!
Where is thy market now?”

This work shows one of the best representations of Turner’s fascination with the violence of humans and nature. The work was based off of his poem and the true story recounted in Thomas Clarkson’s book The History of the Abolition of the Slave Trade, in which a slave ship’s captain threw sick and dying slaves overboard to collect extra insurance money. The painting is hot with reds and yellows, and the sea is violently churning with faint depictions of the chained limbs of slaves thrown overboard. The dramatic emotions portrayed and perceived by this painting make it a great example of a romantic landscape painting. The art critic John Ruskin wrote of this painting, “If I were reduced to rest Turner’s immortality upon any single work, I should choose this.” 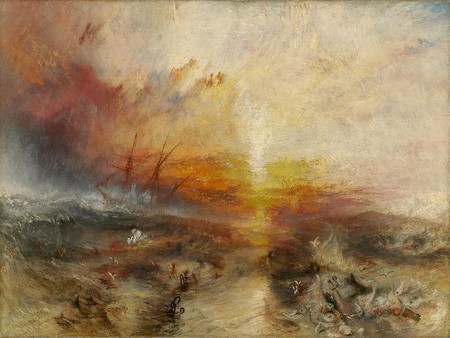 Another of Turner’s more personal paintings, Peace depicts the burial at sea of Turner’s friend, artist David Wilkie. The painting was exhibited with its pair, War, together making War and Peace. War shows Napoleon exiled on an island against a striking background of reds and yellows, which Turner referred to as a “sea of blood.” Peace alternately was painted with a cool palette, portraying a calm, dignified death of a peaceful man. The pair of paintings were criticized at the time of their exhibition for their lack of finishing, and Peace in particular was condemned for its use of black. 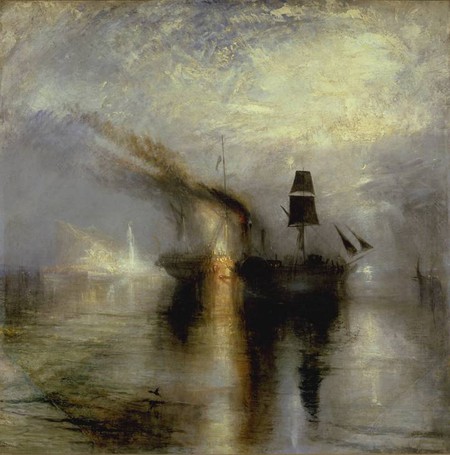 Turner was greatly inspired by his travels through continental Europe, and he especially loved Venice. This painting, exhibited in 1835 to much acclaim, shows off Turner’s appreciation for marine subjects and shows a brilliant use of watercolors. The painting is based on a pencil drawing Turner made during his first trip to Venice in 1819, and it is one of his many Venetian paintings. This work is currently held by the Metropolitan Museum of Art in New York City. 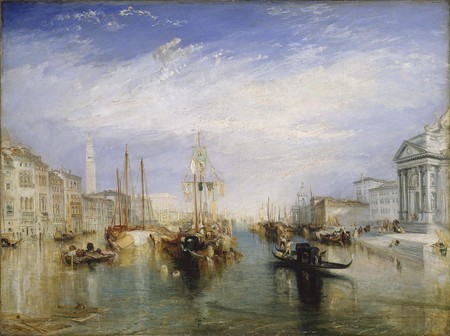 The Grand Canal - Venice | © JMW Turner/WikiCommons
Give us feedback