This Is the Formula for Creating a Winning Eurovision Song 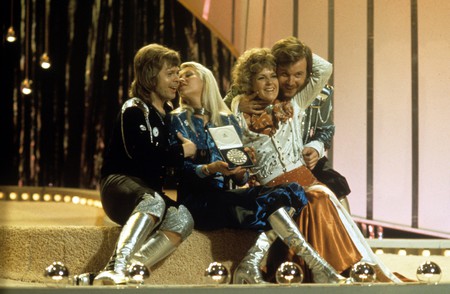 The Eurovision Song Contest is here once again, with 26 countries from all across the continent and beyond lining up to take their place on the stage in Kiev for Saturday night’s final.

As per usual, it’s set to be a pretty spectacular – and occasionally bonkers – show, but the question is, who’ll be hoisting that all-important glass trophy at the end of the evening? Well, leaving aside the fact that Italy are favourites for their first win in 27 years (ahead of Portugal, who are also being heavily tipped to score their first win ever), we couldn’t help but notice certain factors at play which can help you on your way to that elusive victory.

1. Be a solo performer

Winning the contest as a group is actually harder than it looks – notable exceptions aside (UK winners Bucks Fizz, Brotherhood of Man and Katrina and the Waves, not to mention ABBA of course), statistics show that you’ve got more chance if you go it alone. Especially these days – since 2000, 13 out of the 17 winners have been solo acts and three were duos – leaving Finland’s Lordi as the only group to have taken the title since the turn of the century.

2. Be from Scandinavia, Eastern Europe or the Nordics

While there are exceptions to this rule (Germany’s win in 2010 and Austria’s in 2014, for example), the majority of winners from the past 20 years appear to have come from those particular reaches of the continent. Since 1999, Sweden have notched up three wins, Denmark two, Norway and Finland one apiece (leaving just Iceland awaiting that elusive victory). Ukraine have won it twice (in 2004 and 2016), while we’ve also had wins from Estonia, Latvia, Azerbaijan and Russia in that time. Which doesn’t leave a whole lot else to be honest.

3. Uptempo is where it’s at

We all love a good Eurovision power ballad but it doesn’t always translate into a win. Only four ballads – Serbia in 2007, Russia in 2008, Azerbaijan in 2011 and Austria’s Conchita Wurst in 2014 – have won so far this century, with voters favouring those uptempo numbers the rest of the time.

A good song is of course key, but let’s be honest, performance matters also – and if you have something that helps you stand out from the pack then you’re going to get the points rolling in. Lordi had monster masks in 2006, Latvia’s Marie N went for a complete costume change onstage in 2002 – and let’s not forget the impact Conchita made on viewers in 2014.

5. Get your country behind you

Getting the support of your home nation is key. Take the case of Germany’s Lena, whose 2010 winner Satellite was a huge hit on home turf and across Europe in the weeks leading up to the contest. By the time Eurovision rolled round the song had become so popular that all she really had to do to give Germany their first win in 28 years was turn up.

6. Sing your song as late as you possibly can

While it’s entirely possible to win from singing in the first half of the show (step forward Austria in 2014 and Sweden in 2015), a second half draw is always considered to be an advantage – to the extent that 15 of the past 20 winners have been performed in the second half of the contest. If you are going to win from the first half of the show then ideally you don’t want to be on any earlier than tenth – and definitely not second, as no song has ever won the contest being in the number two spot.

Since the ‘free language’ rule was introduced in 1999, only one act has won with a non-English song – Serbia’s Marija Šerifović in 2007 with the ballad ‘Molitva’. Not that it’s an exact science though – given the vast majority of songs are sung in English these days, statistically an English language song is more likely to win simply due to the law of averages.

So what conclusions can we draw from this? Well you need to be a soloist, singing something uptempo with a memorable hook, a stage gimmick and a great performance, everybody has to love you and you don’t want to be on until at least tenth on the night.

There’s no one song that fits that exact description this year, although the current favourite, ‘Occidentali’s Karma’ by Italy’s Francesco Gabbani, ticks plenty of those boxes, although we don’t yet know where he’ll be in the running order (all we know is he is in the first half), and he’s singing in his native tongue. But his solo act, memorable stage performance, catchy chorus and the support of his entire country suggest he could have this one sewn up. We’ll know on May 13 if we’re off to Milan in 2018….