The Top 10 Things to Do and See in Dnipro, Ukraine 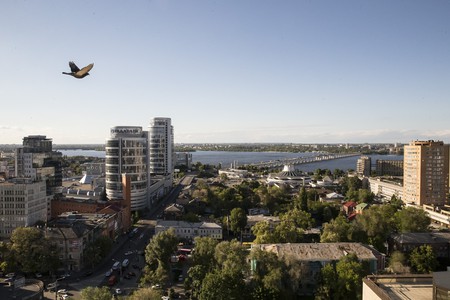 Dnipro is the 4th city by population in Ukraine. It has survived many revolutions and changes: from being the third capital of the Russian Empire (after Moscow and St. Petersburg) to becoming Ekaterinoslav, Dnipropetrovsk and, finally, Dnipro. The city with a Soviet past will surprise tourists with its sights and quick pace of life.

Dmytro Yavornytsky Avenue is the most central and popular street in the city. It stretches for 3.1 miles (5 km). Its roots trace back to the 18th century when the avenue had the same name as the city – Ekaterinoslavky Avenue. Later it was renamed Karl Marx Avenue, and, in 2016 in accordance with decommunization in Ukraine, it became Dmytro Yavornytsky Avenue. The majority of the sightseeing spots of Dnipro are located on this street: Dmytro Yavornytsky National Historical Museum, Central Post Office and Dnipro National University.

Since 2012, the Menorah Centre has welcomed visitors and dazed tourists. The complex constitutes one of the largest Jewish cultural and business hubs in the world. It has seven towers of different heights, the largest of which is 77 meters (252 feet), or 22 floors. It was constructed in the form of a seven-branched menorah, a symbol of Judaism. From the top of the Menorah Centre, marvel at the incredible panorama of the city and Dnipro River. 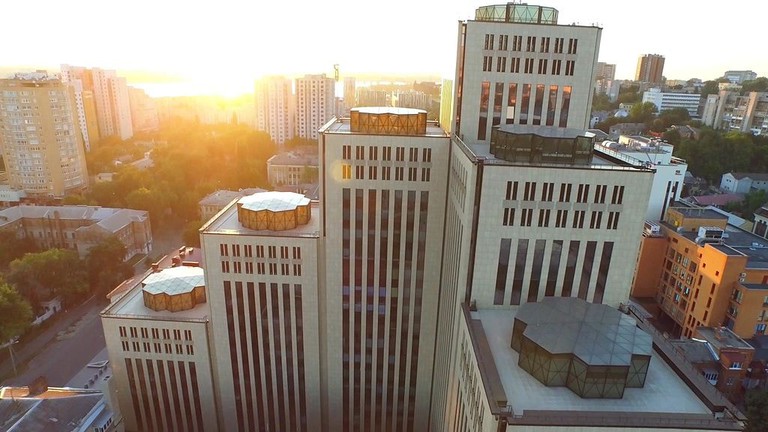 The 18th century Transfiguration Cathedral in the historical heart of the city and has huge architectural and artistic value. The construction of the cathedral reflects the techniques and traditions of the Russian classical school. In 1787, Empress Catherine the Great herself laid the foundation stone. The façade is decorated with a mosaic of the Transfiguration of the Lord. 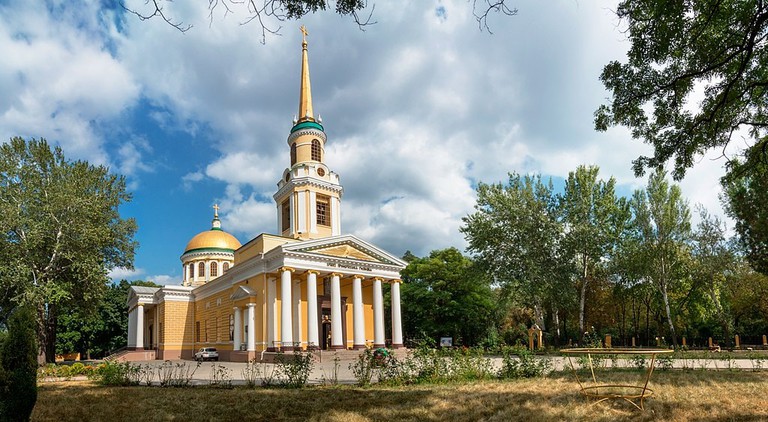 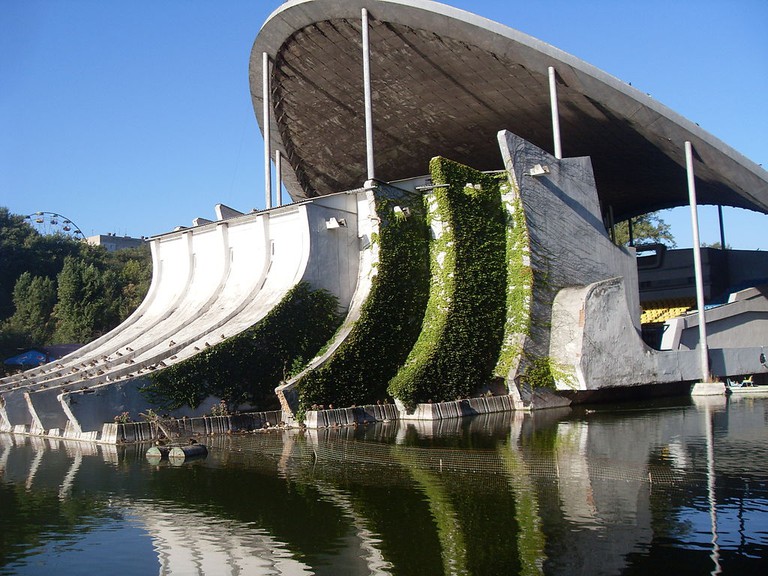 Summer theatre at Lazar Globa Park | ©Atoly/WikiCommons
Lazar Globa Park is a green oasis in the so-called concrete jungle of Dnipro. Being a favourite place of locals, it offers a range of activities, from summer theatre and a children’s railway to roller coasters and historical attractions. There’s also a dolphinarium, where one can watch dolphins and fur seals. In the middle of December, in the eastern part of the park, the authorities usually install the main Christmas tree of the city, making the destination even more attractive.
Open In Google Maps
95 Dmytra Yavornytskoho Avenue, Tsentralnyi district Днепр, Dnipropetrovs'ka oblast, 49000, Ukraine
+380567324377
Give us feedback 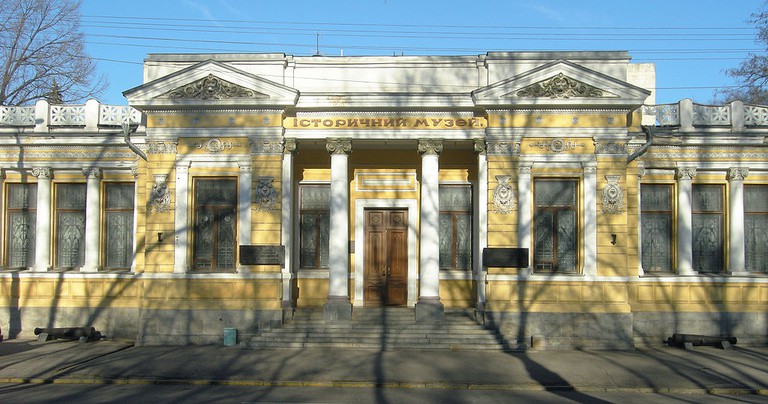 Historical Museum Dnepropetrovsk | © TheVovaNik/WikiCommons
The National Historical Museum of Dnipro was founded in 1849. The development of the museum is primarily connected with the name of academic Dmitri Ivanovich Yavornytsky, who served as museum director for more than 30 years (1902-1933). Today the museum bears his name. It is a real treasury of historical and natural resources, monuments of the local land and world culture. There are also often theatrical night excursions with music and light effects, as well as thematic museum salons.
Open In Google Maps
16 Dmytra Yavornytskoho Avenue, Sobornyi District Dnipropetrovs'k, Dnipropetrovs'ka oblast, 49027, Ukraine
+380674477014
Visit Website
Give us feedback

Marvel at the White Swan Fountain

The embankment of the city is one of the most romantic spots in Ukraine. The White Swan Fountain is even more marvellous. This original floating construction was installed in 2005 on the Dnipro River. The height of the water jet reaches 50 meters (164 feet). In the dark, the fountain is illuminated, and harmoniously blends into the scenery of the city.

If you’re wondering where to go shopping in Dnipro, Katerynoslavsky Boulevard is the answer. This pedestrian zone, located in the very city centre, has united all the poshest restaurants, popular bars and coziest cafes. There are a lot of internationally famous shops, concept stores and boutiques here. The boulevard is especially beautiful at night, with the fountains, lights from shop windows and street lamps. 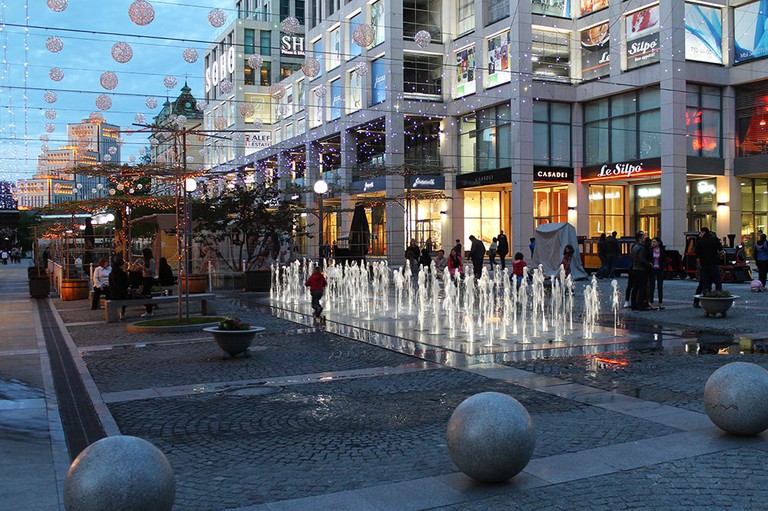 Contemplate the Battle for Dnipro Diorama

The Battle for Dnipro is the largest diorama in Ukraine, the second largest in Europe and one of the largest in the world. It is the centre of a massive memorial complex dedicated to the heroes and events of the Great Patriotic War. The impressive models show defensive structures, weapons, crossings and other military attributes. Special lighting and sound on the diorama create cool effects.

In Dnipro there is no more mysterious place than this. According to legend, the island got its name from the Byzantine monastery founded there in the 9th century. However, no archaeological evidence of the existence of the monastery has so far been found. According to individual references in various travel records, the monastery ceased to exist in 1240, during the Western crusade of Batu Khan. For seven centuries, the island was empty until the Orthodox church was built in the northern part of Monastyrsky Island.

An unusual sight of the city is the Rocket Park, which was opened in 2013. It features Soviet-era secret rockets that were built at the Southern Machine-Building Plant. The park’s museum complex represents the history of the development of cosmonautics, the achievements of Ukrainian science and technology. The city of Dnipro rightfully bears the name of the cosmic capital of Ukraine.