The 10 Best Things to Do in Kyiv (Kiev), Ukraine 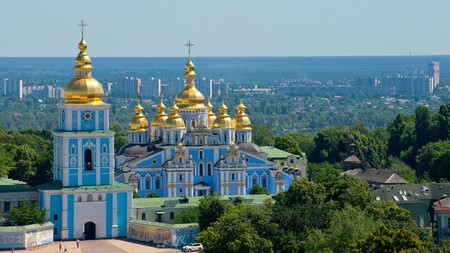 Marvel at the architecture of the numerous onion-domed churches in Kyiv, like that of St Michael | © robertharding / Alamy Stock Photo

From sampling new Ukrainian cuisine and exploring monasteries to discovering Soviet-era modernist architecture, there is no shortage of things to do in the Ukrainian capital, Kyiv (Kiev).

In Kyiv, UNESCO-protected historical sites stand proud alongside a vibrant art scene, while a new hip restaurant or coffee shop seems to be opening almost every week. The Ukrainian capital has emerged as one of Europe’s most exciting contemporary cities, and an increasingly popular weekend break destination. After exploring the Pechersk Lavra caves, tasting the best local street food at Besarabsky Market and getting a feel for the city’s design scene, you’ll soon understand why.

Visit the mummies at the Kyiv Pechersk Lavra caves

A must-visit on any trip to Kyiv is the Pechersk Lavra monastery complex, a UNESCO-protected historic Orthodox Christian monastery on the hills above the Dnipro River. As weird as it sounds, one of the biggest attractions here is the chance to descend underground and walk through the caves where mummified remains of former monks have been laid to rest. After exploring the caves be sure to marvel at the Byzantine- and Baroque-inspired architecture of the numerous onion-domed churches, particularly the Trinity Gate Church, Dormition Cathedral and Refectory. For one of Kyiv’s most impressive panoramas, climb to the top of the 96m (315ft) bell tower.

Get inspired on Andriyivsky Uzviz

Crowned by the elegant Baroque St Andrew’s Church, the steep Andriyivsky Uzviz (Andrew’s Descent) is to Kyiv is what Montmartre is to Paris. This steep street from the centre of town to Podil forms one of Kyiv’s most artistic neighbourhoods – full of artisan craft shops and quirky coffee shops. Start by having a cup of hot chocolate at Lviv Handmade Chocolate, before heading to the top of Castle Mountain for iconic views over Kyiv. To get to the top, take the metal stairs next to the Kyiv Academic Drama Theatre on Podol (making a note to visit the theatre for a show one evening).

Walking around Kyiv is like reading an architectural history book – this city has it all. For the lovers of all things ancient, there’s Saint Sophia Cathedral, a UNESCO-protected medieval masterpiece with well-preserved frescoes inside. The Art Nouveau enthusiasts will be mesmerised by the whimsical design of the House with Chimeras, an animal-figure-adorned work of local architect Władysław Horodecki, whose architectural style won him praise as the Antoni Gaudí of Kyiv.

Nevertheless, it’s in its Soviet Modernism that Kyiv really shines. Ukrainian director Antonio Lukich, whose film My Thoughts Are Silent (2019) was awarded the special jury prize at the Karlovy Vary Film Festival in 2019, has some Kyiv Modernist favourites of his own. “First of all, there is the House of Cinema, a nostalgic place,” says Antonio. “I really like the Daisy Houses next to Obolon metro station, they were built (as were all the grandiose Soviet houses) so that the people didn’t forget how small they are. Finally, there is the impressive House of Furniture at the Druzhby Narodiv metro station.”

Want to discover the best of contemporary Ukrainian cuisine? The restaurant 100 rokiv tomu vpered (100 years ago in the future) has you covered by creatively experimenting with traditional tastes to deliver healthy and innovative dishes. Its interpretations of borsch (beet soup served with plum) and Carpathian cornmeal dish banosh (corn porrige accompanied by feta cheese) are musts. Another representative of the new Ukrainian cuisine is Kanapa, where you can order a tasting set covering various regional specialities paired with local wine.

There are other food superheroes in Kyiv too. “Be sure to try the Bessarabian bryndza cheese with ripe tomatoes and varenyky dumplings with cherries at Barva. Neobistro Assambleya serves comfort food from the not-so-distant past, so come here for the bread with chocolate butter and smoked salt accompanied by hot tea,” recommends Olena Braichenko, a founder of the educational food project Їzhakultura and food-centred publishing house Їzhak.

Get outdoors on Trukhaniv Island

If you look at Kyiv from the height of its hilly right bank you notice how green it is. Divided by the expansive Dnipro River, the city limits include more than 30 islands. And that, in turn, means infinite outdoor possibilities to enjoy. The most accessible and developed option would be Trukhaniv Island, connected to the central part of Kyiv by the Pedestrian Bridge (where you can enjoy excellent vistas onto the river).

According to local musician Bohdan Bondarenko, founder of the city’s Bond Guitars design workshop, the best way to explore Trukhaniv Island is by bike. “Follow the path straight to the far southern beach where you can enjoy a spectacular panorama of the Metro Bridge over the Dnipro River,” says Bohdan.

Get immersed in the local design scene on Reitarska Street

Once Reitarska was just another picturesque street in the Zoloti Vorota district of Kyiv. Today, it’s a flourishing design quarter with abounding showrooms, clothing stores, galleries and cool hangout spots. Hunt for clothes by young Ukrainian designers at the Riot Division concept store (specialising in techwear), Kapkan for streetwear and the Sammy Icon concept store for socks. After a spot of retail therapy, visit the contemporary art gallery the Naked Room.

Yaroslav Druzyuk is a good person to ask for Reitarska recommendations. as he regularly writes about Reitarska happenings as the editor-in-chief of BAROUT, a local magazine on bar culture; and coffee mag Blackfield Coffee. “At Zigzag you can have a great meal any time of the day, Malevich is where to have a glass of wine, while Vesuvio is for a good old-fashioned pizza,” he advises.

Go on a coffee crawl

In recent years, Kyiv’s coffee scene has boomed – speciality coffee shops have conquered the Ukrainian capital. For a cosy central spot with Turkish sand coffee and books visit Paliturka, or for a hidden, truly local place, find refuge at 16.coffee. Blur Coffee is a vibrant café with an international crowd, while Come and Stay is a tiny student hipster hangout tucked away from the hubbub in a courtyard.

The central Besarabsky Market – notable for its Art Nouveau style – is one of the most popular street food hotspots in the capital. Vegans will be delighted by Green 13 Café Vegan Kitchen, where their grilled tofu green burger is the star of the menu. Right next to it is Vietnamsky Privet, offering affordable and incredibly tasty bowls of pho. For a market with a more modern vibe check out the Kyiv Food Market, a vibrant collection of restaurants, cafés and bars close to the Arsenalna metro station.

Recent political and economic turmoil has given birth to lively countercultural movements in Kyiv, making the city one of Europe’s hottest spots for raves. This is not least thanks to techno collectives such as Cxema and Rhythm Büro, along with the already legendary Closer club, set in a former sewing factory. Don’t miss the annual Strichka Festival in May and Brave! Factory electronic and independent music festival at the end of August.

Marvel at Ukrainian and international art

Fit for such a creative megapolis, Kyiv’s museum scene is thriving. Start with something local, heading to the recently revamped National Art Museum of Ukraine (NAMU), which boasts a comprehensive collection of artworks by the country’s most renowned artists and covering all periods of history. Next up, there’s the Khanenko National Museum of Western and Oriental Art, set in a magnificent 19th-century mansion. Finally, stop by at the Pinchuk Art Centre, a world-class contemporary art venue that has hosted exhibitions by such famous international artists as Ai Weiwei, Banksy and Damien Hirst. All three of these museums are located close to the central Khreschatyk Street, making them easy to visit in a day.