The 10 Most Incredible Landscapes in Ukraine 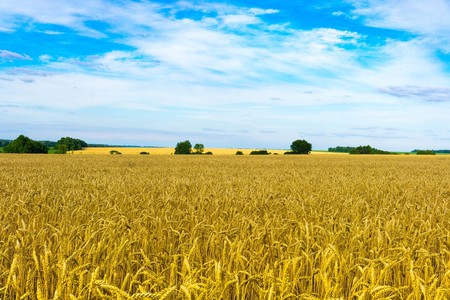 Ukraine is a country of natural wonders. Most of its territory is lowlands with dense forests, hyaline lakes and green fields. Meanwhile, the western part of the country pleases the eye with its high mountains (the Carpathians). Travel to Ukraine to discover incredible landscapes and find your own place of power. 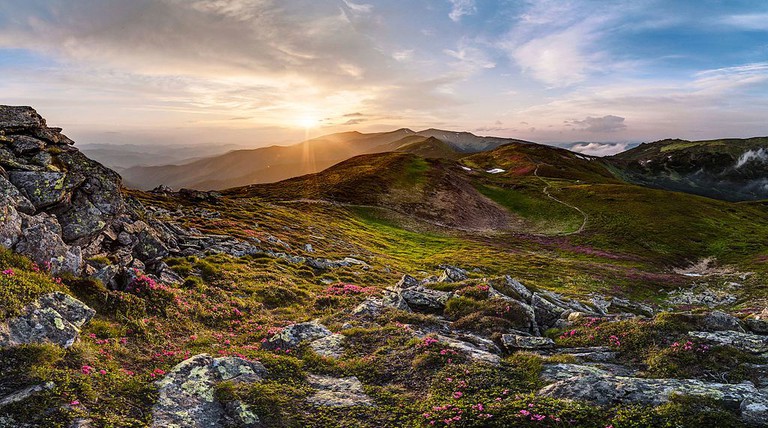 The Carpathian Mountains | ©Moahim/WikiCommons
The Carpathian National Nature Park became the first state reserve in the country in 1980. Nowadays, there are 48 tourist routes to explore the place. The lowest point is 500 meters (1640 feet), while the highest one is Mount Hoverla at 2,061 meters (6,761 feet); climbing is allowed from May to November. Majestic mountains and the purest rivers, picturesque valleys and mineral springs, breathe fresh air or go camping to escape the city bustle.
Open In Google Maps
6 вулиця Василя Стуса, Yaremcha, Ivano-Frankivs'ka oblast, 78500, Ukraine
+380343422731
Visit Website
Give us feedback

A river called Inhulets flows like a narrow ribbon through the central Ukraine. It is a right tributary of the Dnieper River. At the mouth of it, there are several lakes and marshes, which become connected due to melting snow drifts in spring. The view over the Inhulets River opens mostly from rocky shores, which is what makes the landscape to seem so unique and chiselled. 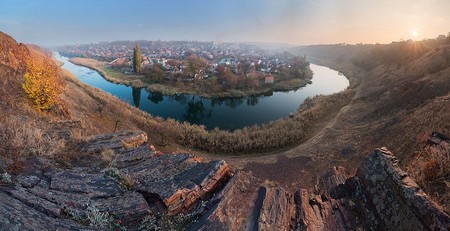 Kamianets-Podilskyi is a city that unites beautiful landscapes, historical landmarks and engaging leisure activities. Every year, the location hosts an International Military Festival, Terra Heroica. The visitors watch the performances of European ethnic musical bans, attend exhibitions and competitions. In one word, the city offers a lot of fun and adventures. Kamianets-Podilskyi Castle is certainly a must-see attraction, from where you can observe the fabulous panorama of the city. 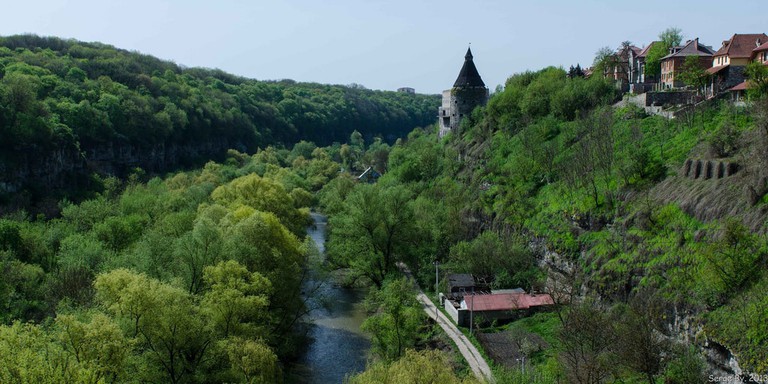 Whether covered with snow or surrounded by lush thickets, one of the natural wonders of Ukraine is equally beautiful at any season. The legend of the waterfall says that the constant noise of water, which is audible even at a large distance, sounds similar to a whisper. Along the stone cascade, locals have built wooden stairs, which also allows you to admire the waterfall from the top. 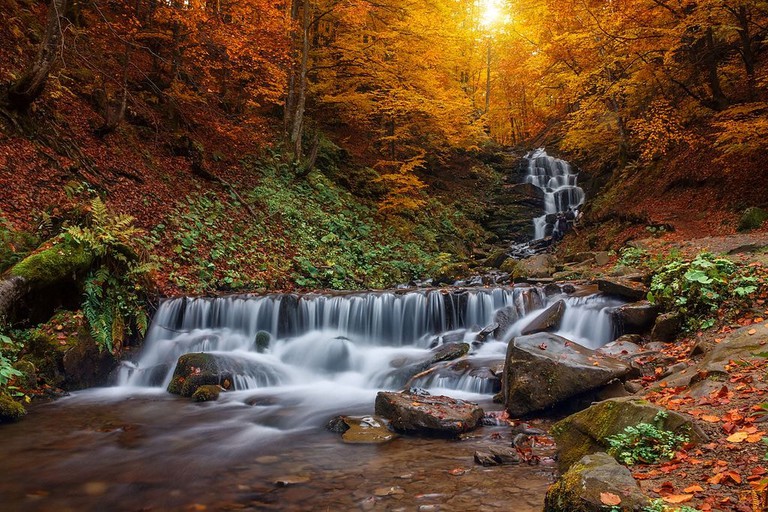 The Hawk’s Eye Rock is a stone arch resembling an eye. To experience the mystery of nature, come to the Natural Geological Monument Protiate Kaminnia at night. During the daytime, travelers come here to test their rock climbing abilities. Nearby, a group of instructors provide special equipment and teach visitors how to climb and descend. On the way back, stop for a while and capture the fascinating mountain view or just have some rest after the sports activities. 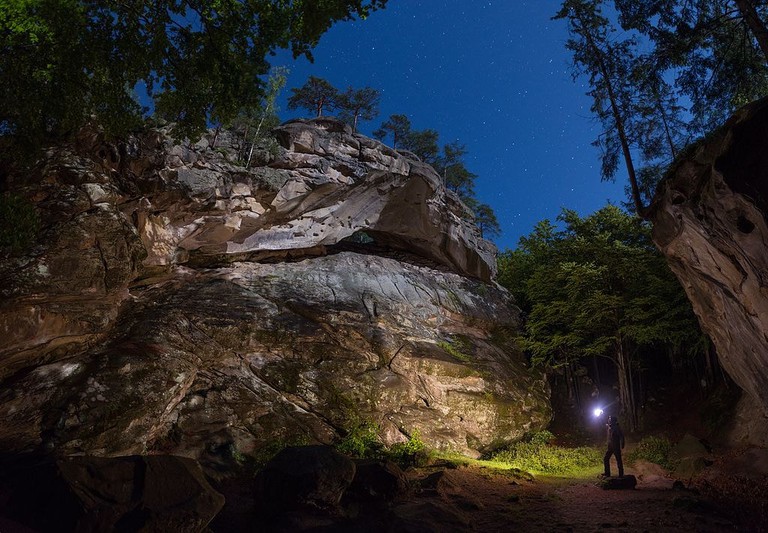 From one side, the Kinburn sandbar is washed by the salty sea water, from the other, by fresh waters of the Dnieper river. This unusual phenomenon, now constituting of a part of the Black Sea Biosphere Reserve, centuries ago was covered by forest. Over time, the area has transformed into empty beaches and wild nature. Kinburn sandbar beckons those willing to have a rest and spend some time alone. 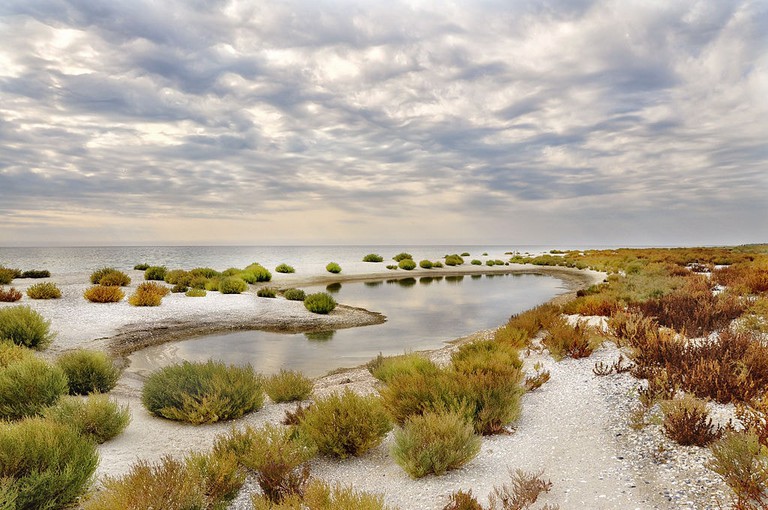 The National Park is the place of the confluence of two rivers — the Southern Bug and the Korabelnaya River. It is a perfect place to wander through forest and rock paths or have a picnic amidst marvellous scenery. One of the most attractive objects of the Buzkiy Gard is the Aktov Canyon, the only canyon in Europe some say resembles the well-known canyons of the western United States. 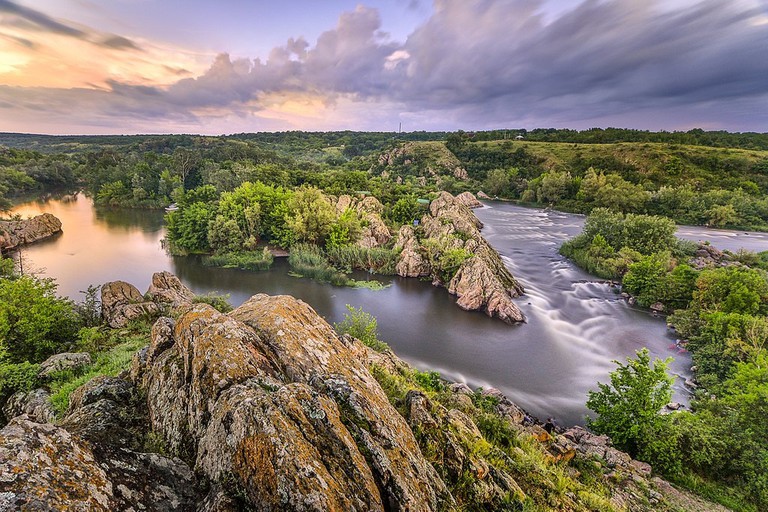 Tokivske Waterfall, also known as a waterfall on the Kamianka River, is one of the most beautiful places in Dnipropetrovsk region. The recognizable feature of it is a red granite on the rocks. When the sun goes down, Tokivske Waterfall amazingly reflects the sun’s rays and shows off all the beauty of the place. Ukrainian people often come to the reserve to have a family day, spend time together and to swim in the cool waters of the river. 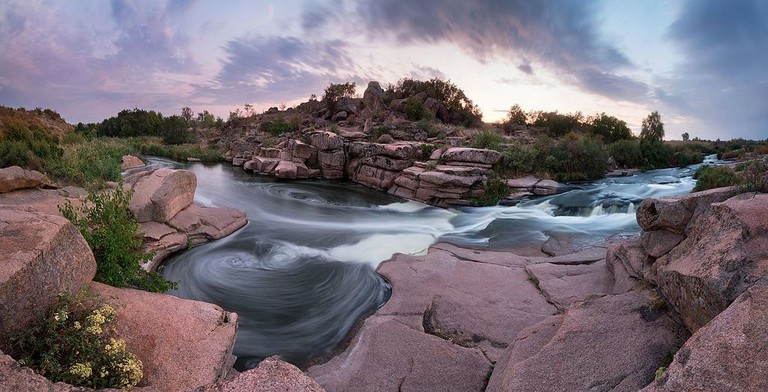 The capital of Ukraine is a city of landscapes that has a range of adorable views to offer. Kiev, like ancient Rome, is located on seven hills, which happens to have historical and cultural roots tracing back from the times of Kievan Rus. St. Andrew’s and St Vladimir Hills, along with Starokievska, Zamkova, Schekavica and Cyril mountains and Lysa Hora create a chain of hills, from which one can enjoy a great sight over Kiev city. 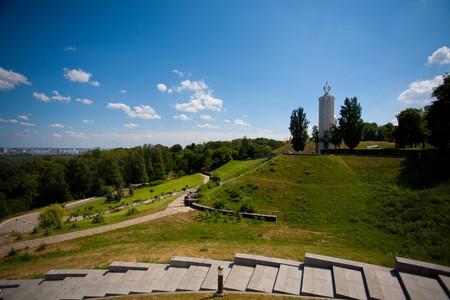 A land of great beauty, this is one of the favourite places of the Ukrainian nation and contains 98 archaeological sites. The swift cliffs of the canyons along the banks of the Buh River reach a height of 50 meters (164 feet) and are a great place for alpinism training. The territory of the park has amazing flora and fauna, artefacts historical and cultural and some amazing routes for rafting. 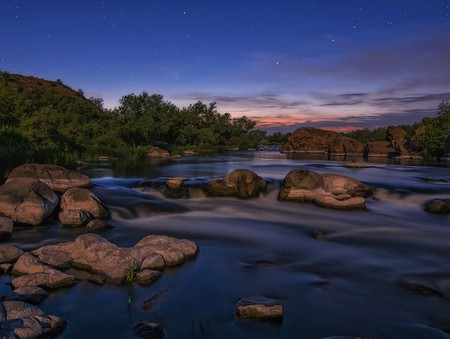