How to Make the Most of 24 Hours in Odessa, Ukraine 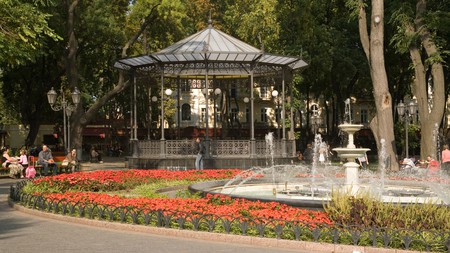 No visit to Ukraine is complete without a trip down to Odessa, a port city known for its singular history, humour, and multicultural flair. Though staying longer is always better, 24 hours will give you a taste for Odessa that will leave you wanting more.

Odessa, Ukraine’s third most populous city, sits on the shores of the Black Sea in the south of Ukraine. From its founding by Catherine the Great in 1794 and its status as a porto franco (free port), Odessa has forged a unique identity which incorporates traditions from her multicultural inhabitants, mixed with Odessa’s own brand of humour and laid-back, beachfront vibes. Many local residents consider themselves to be ‘Odessan’ first and foremost, and the city itself has a distinctive culture from the rest of the country that demands to be seen, heard, and tasted.

Pro tip: Before your train rolls in, download the 2GIS app for Odessa on your phone. It includes accurate information about bus, tram, and trolley bus routes. The app is available in English, Russian and Ukrainian, so navigating will be a breeze.

From the train station, walk across the square to Richelyevskaya Street where you’ll find Kompot, a delightful little café with a lot of character. Here you can try Ukrainian breakfast favourites like syrniki (fried dough with cottage cheese) and blinchiki with jam (thin crepes) or enjoy lunch and dinner favourites like pelmeni and vareniki (filled dumplings). Don’t forget to ask for kompot (stewed fruit juice) with your meal. 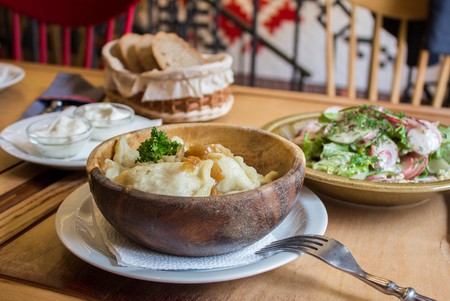 Get to know Odessa’s unique character

A stone’s throw from Kompot is Privoz, one of Odessa’s largest open-air food markets. The market was founded in 1827, ten years after Odessa’s establishment as a porto franco, which opened the door to waves of immigrants desiring to do business and build their fortune in the new city. Today, Odessa is home to people of nearly 100 different nationalities, and this multicultural dynamism is most evident at Privoz market. Walk around and taste seasonal fruits grown on small farms in the Odessa region, sample different varieties of local honey, buy some unique spice mixes or dried fruit from Central Asian vendors, and listen to some lively conversations between salespeople and shoppers peppered with unique “Odessan” phrases and jokes, born mostly from Odessa’s historic Jewish community.

*Note: Privoz is closed on the first Monday of the month. 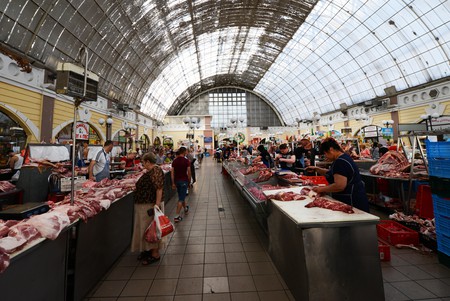 Pro tip: Trams and trolleybuses are an easy way to travel if you’re short on time. If you’re feeling braver and ready to try out your Russian, get on a yellow marshrutka bus.

Next, travel by tram to Sobornaya Ploschad to browse paintings by local artists and take a look at some souvenirs. Step into the Transfiguration Cathedral, a Russian Orthodox church on the main square. Rebuilt in 1999 after its destruction under Stalin in the 1930s, its white marble interior and vaulted ceilings provide a peaceful atmosphere for a moment of reflection. It gleams with gold and reflected candlelight representing prayers of the faithful and the down-and-out alike, while icons and paintings of Biblical heroes and saints from Kievan-Rus line the walls and ceiling, a great cloud of witnesses joining with those who come for prayer. 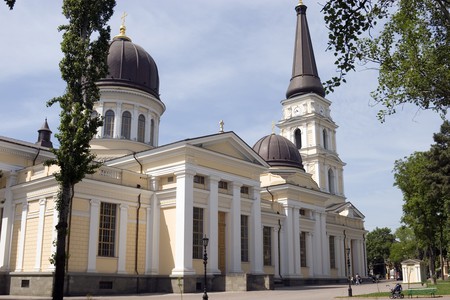 Cross the street and head left until you see Deribasovskaya, Odessa’s famous pedestrian street. As you walk down the cobblestone street, duck into Passage on your right and you’ll be instantly transported to Italy. Built in the 1840s mostly in Neo-Baroque style, Passage was originally a hotel. Today it houses several souvenir places, as well as trendy tattoo, coffee, and barbershops. Tucked in the corner of Passage is a souvenir store with the best selection for a great price. Walk through Gorsad, the city garden, and enjoy its cheerful flowers and charming central fountain. Peppered throughout the garden are monuments to several famous Odessans, and authors Ilf and Petrov’s 12th chair (making reference to the authors’ beloved work The Twelve Chairs). If you visit on a weekend, sometimes there’s even live music and dancing in the rotunda.

Take a walk back in time

At the bottom of Gorsad is Lanzheronovskaya street, which leads straight to Odessa’s iconic Neo-Baroque opera theatre. Tickets are affordable, averaging less than 100UAH (US $4.20) apiece, and the theatre’s rococo-style interior will delight you almost as much as the ballet itself. But with only 24 hours in Odessa, you’ll have to save the opera for your next trip.

A short walk from the opera house along the Alley of famous Odessans and past the archeological museum is charming Primorsky Boulevard. There stands a monument to poet Alexander Pushkin erected by Odessans, with its back to the parliament building in a slight snub to the local government, which chose not to contribute to the cause. Although Pushkin only spent 13 months in the city, Odessa claims him as a favourite son. Take a break in the shade of an enormous sycamore tree in front of his statue, planted in his honour in 1889. 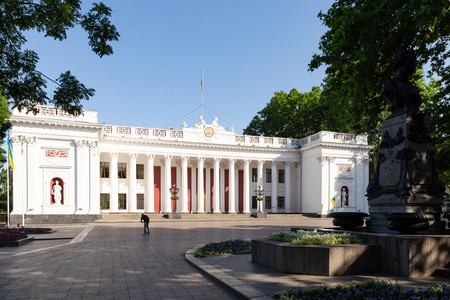 Continue past displayed artifacts from an ancient Greek settlement in 6th century BC and pay a visit to the Duke of Richelieu, one of Odessa’s four founders, who stands about halfway down Primorsky and points to the sea. Run down the 192 steps of the Potemkin Stairs, made famous from Sergei Eisenstein’s 1925 silent film Battleship Potemkin, or just stand at the top and take a photo of this iconic Odessan landmark.

Explore Park Shevchenko and relax by the beach

Head back up Primorskiy to Pushkinska street and make your way to the Gorodskoy Rinok Edi (The City Food Market). There you’ll find excellent offerings from many of Odessa’s freshest and most colourful restaurants, all under one roof. If hipster food courts aren’t your style, head next door to Givi To Me for some Georgian khachapuri po adjarskiy (traditional cheese-filled bread with a runny egg in its centre) that will blow you away. 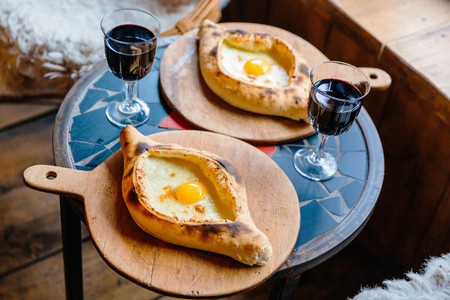 Take trolleybus 9 to Zhukovskovo street, then follow Sabanskiy alley to Park Shevchenko. Named for Ukrainian poet, author, and artist Taras Shevchenko, this vast park offers a unique mix of attractions and a green respite from the bustle of the city. Near the park’s entrance stands a unique garden/food truck hub/concert space called Zeleniy Teatr (Green Theatre), which regularly hosts concerts, masterclasses, workshops, and craft exhibitions. Between the trees of the park you can also find amusement park rides for children, Odessa’s Chernomorets football stadium, and the Monument to the Unknown Sailor and eternal flame.

Once you’ve explored Park Shevchenko, head to nearby Lanzheron beach for a rest by the Black Sea. Lanzheron boasts a variety of restaurants, clubs, and Nemo Dolphinarium, so make sure to add this beach to your list for your next trip to Odessa. On the way back from Park Shevchenko, stop in at 4City café for an incredible macaron or two… or five. 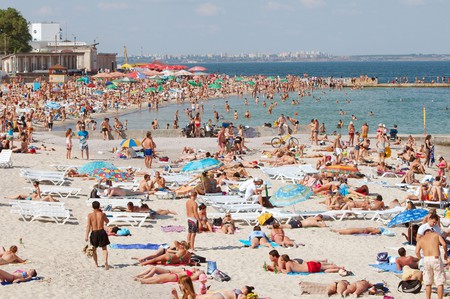 Travel to Crimea without leaving Odessa

Next, travel to Hadjibey, a restaurant offering a mouthwatering introduction to Crimean Tatar culture. On the eastern side of the Black Sea sits the Crimean Peninsula: the homeland of the Tatars, a Turkic people with a distinctive language and culture. Despite deportations under Stalin during World War II, and persecution following the annexation of the peninsula by Russia, Crimean Tatars have fought to maintain their language and culture. There is nowhere better to discover this in Odessa than at Hadjibey. Named for the Tatar settlement that once existed on the site of modern-day Odessa, Hadjibey’s unique decorative touches like iron lanterns and colourful tapestries transport you in time and space. Enjoy chebureki (fried filled dough) alongside shashlik or kebab from the grill served with Tkemali (sour plum) sauce. After dinner, walk one block over to Richelevskaya for an evening coffee at Coffee Room.

Finish up with chocolate and dancing

End your evening in Odessa back on Deribasovskaya at Lviv Handmade Chocolate Café with a steaming mug of rich hot chocolate or some glintvein. For those who prefer a more high-calibre evening, head back towards the train station to Palladium, a premiere nightclub that boasts high-energy dancing, exclusive concerts, and a swish interior. Spend your last hours in this historic, one-of-a-kind city dancing until the sun comes up.