Eurovision Flasher Could Be Jailed for Prank 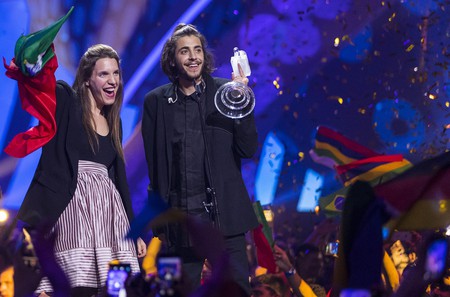 A serial prankster who stormed the stage at Eurovision to flash the audience could be facing up to five years in jail.

Ukrainian Vitalii Sediuk turned up draped in an Australian flag and pulled down his trousers to reveal his bare bottom at the final in Kiev on Saturday night.

Sediuk, who interrupted a performance by last year’s Eurovision winner Jamala, was arrested and detained for 72 hours by police soon after.

This guy is not an Aussie. His name is Vitalii Sediuk a Ukrainian serial pest #Eurovision pic.twitter.com/gt6a8D83UN

The country’s interior minister, Arsen Avakov, claimed the prankster could be facing anything from a fine to five years in prison on hooliganism charges in a post on Facebook.

He wrote: “During the performance of our Jamala, according to his own words, he decided to realise his hobby as he ‘unofficially works as a provocative journalist’.”

Sediuk is famous for his celebrity pranks and had previously invaded the stage during Adele’s acceptance speech at the Grammys.

He also hit Brad Pitt in the face as he signed autographs in Los Angeles and tried to ambush Kim Kardashian in Paris days before she was robbed in her hotel. Other stars he has targeted include America Ferrera and Leonardo DiCaprio.

But some celebs have fought back – Will Smith slapped him after he kissed the actor at a Moscow premiere and model Gigi Hadid elbowed him in the face when he tried to pick her up in Milan.

This year’s Eurovision was won by Salvador Sobral of Portugal – the country’s first ever victory at the contest. Bulgaria came second, while Moldova was third.