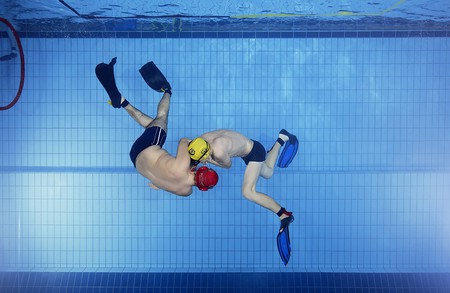 Underwater wrestling is a thing. It may be called aquathlon, but to the uninitiated, the sport is is more easily explained as underwater wrestling, with two competitors battling it out in 30-second rounds at the bottom of a pool.

Wrestling paraphernalia is fairly unique, all tights, masks and face paint, but this version comes with the added necessities of goggles and flippers. In aquathlon, there is a ring, as such, but it is between two and six metres deep and five metres square, marked out by ropes floating on the surface. The kind you’d usually see divvying up swimming lanes.

The two opposing sides of the ring are given different colours and there is a square mat (the same size as the ring) at the bottom of the pool. Underneath each coloured rope is a hoop that the wrestlers swim through to ‘enter’ the ring. Once there, a 30-second round begins, with each fighter trying to tear a ribbon off their opponent’s ankle. So apologies, there are no clotheslines, no tombstones or elbows from the top rope. 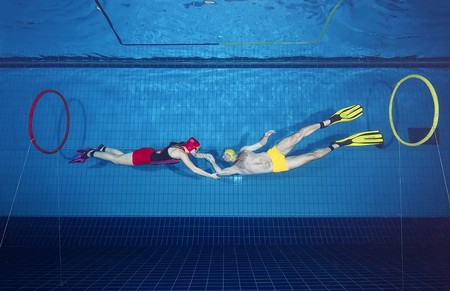 If a wrestler is quick enough off the blocks, they can also win a fight by preventing their opponent from swimming through their hoop in the first place, as there is a six second limit between the start of the round and the entry to the ring.

Andrey Nekrasov, an underwater photographer, spent time capturing competitive bouts at a school in his native Ukraine. He said: ‘I knew a little about aquathlon and when I was given the opportunity to photograph the sport, I jumped at the chance. It is very unusual to see how people struggle under water but it was fascinating to watch and photograph. I spent several hours underwater photographing the competition and the athletes in action.’

The sport invented the early 1980s by Igor Ostrovsky, an underwater sports coach at the Moscow Technological Institute, but it was only in 2008 that aquathlon was officially recognised by the CMAS (World Underwater Federation).