An Art Lover’s Guide to the Murals of Kyiv (Kiev) 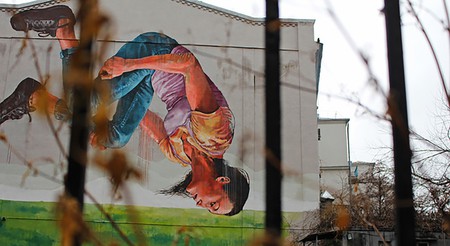 Not so long ago, Kyiv was still developing as an art destination. Today, it’s home not only to numerous exhibitions, performances and premieres but also to street art. This vibrant art scene has evolved far beyond the underground framework, making the incredible murals an integral part of the urban scenery.

Artists have already created more than 150 murals on the walls of buildings in Kyiv, and this trend is still expanding. The amazing works of art by the talented painters or graffiti artists from Ukraine and other countries such as Spain, Portugal, Argentina and Australia enliven the grey and gloomy Soviet-era-style constructions. From beautiful landscapes to detailed portraits, here are some of the striking murals found around the capital of Ukraine.

This mural by the Australian artist Fintan Magee is depicting Anna Rizatdinovа, a Ukrainian former world champion in rhythmic gymnastics. The CityArt initiative implemented the project in 2015. The mural took almost two weeks to complete. 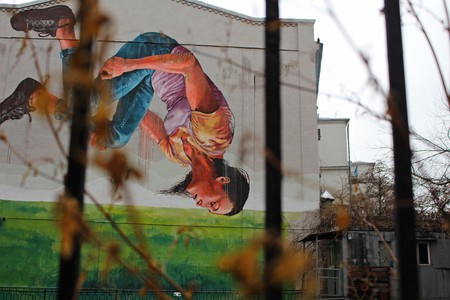 Sergei Nigoyan was a victim of the armed confrontation on January 22, 2014, during the Ukrainian Revolution of Dignity. He was among 100 people (Heaven’s Hundred Heroes) who died that night. The creator of this mural is Alexander Farto, also known as Vhils, from Lisbon, Portugal. The portrait is unique in that it is carved into the wall.

The mural commemorates the 150th birthday of the outstanding Ukrainian historian and politician, Mikhail Sergeyevich Grushevsky. Kailas-V, who specialises in street-art projects, created the piece of art in November 2015. It is unique in that the work lies on top of another mural – an advertisement for a construction company.

This mural, dedicated to the Ukrainian poet Lesya Ukrainka, is not far from the Golden Gates (one of the ancient attractions of Kyiv). It occupies the entire end wall of a seven-storey building. Its creator is an Australian artist by the name of Guido Van Helten. He painted the young poet in an embroidered outfit, thoughtfully looking into the distance. In addition to being a poet, Lesya Ukrainka was also an active political and feminist activist. 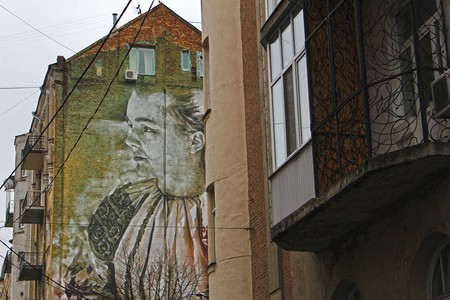 The Black Sea artwork is by Jake Aikman, an artist from South Africa. On the wall, one can see uneasy waves of the Ukrainian Black Sea. It is inspiring and calming at the same time. Locals joke that those who did not manage to go on summer holiday should go to the mural.

On the streets of Kyiv, you may hear different variations of this mural’s name. Some call it The Dreamer, while others refer to it as A Flying Elephant or A Romantic Elephant. This piece of art, decorating the wall since 2015, has quickly become the favourite among citizens. Local artist Alexander Korban created the mural, which was a Dynamic Urban Culture Kyiv art project.

The Girl in Sunflowers

This patriotic mural is on display in a residential district of Kyiv. It is a symbolic painting, depicting a small Ukrainian girl among the sunflowers. A charity initiative and artists from a Wall Street company created the work in 2016.

This piece of street art appeared on the wall of a five-storey apartment house in the spring of 2014 after the revolutionary events in Ukraine. It portrays a new Ukraine, awakened after a long sleep and embodied in the face of a young girl who is protecting her land and a new generation. Revival is the most famous Kyiv mural. After all, it is in the creative heart of the capital – Andrew’s Descent. 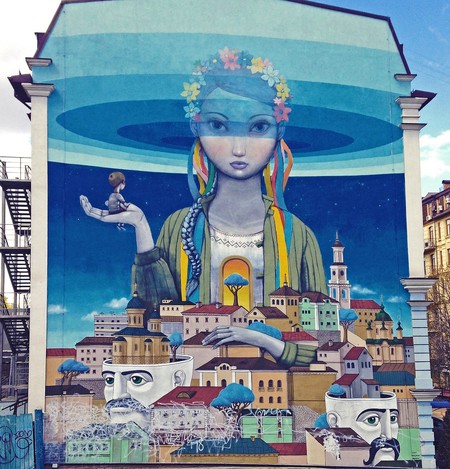 These murals are, indeed, breathtaking phenomena that delight the locals and promote the image of Ukraine abroad as a street-art capital.