An Art Lover’s Guide to the Murals of Kharkov 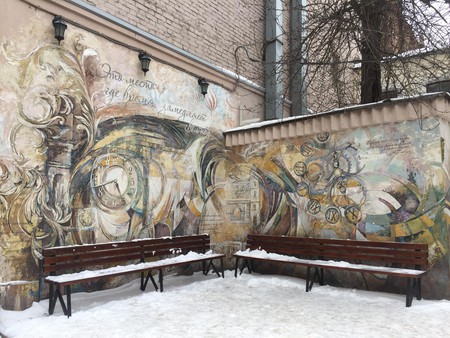 Ukrainian street art has spread far beyond the Kiev scenery. Today, the city of Kharkov is another artsy destination, introducing the murals of the great Ukrainians, important historical events and people’s cheerful spirit. Here are the most incredible examples.

The portrait of Yuri Gagarin

Since 2013, one of the Kharkov’s central avenues is decorated with the portrait of Yuri Gagarin, who was the first people in the world to journey into outer space (April 12, 1961). The author of the mural Palval Andrey purportedly used more than 500 aerosol cans of 40 different colour shades to finish the project. Its definitely worth it; the art piece was included in the record book of Ukraine.

The Blue Moon mural is the masterpiece of Arsek & Erase, created in the framework of the festival Mural Fest. This eye-catching painting is made in the watercolour style. However, such beauty comes with pain: The artists came to Ukraine in November 2017 and had to spend several days under the cold heavy rain to bring this mural to life.

This surreal mural is just a fantasy of artists, while locals have given it another name – a Dissected House. One can see the various parts of the picture opening up the personal space of the inhabitants of the house. It took the creative group Kailas-V one month to complete the street art object, timed to the City Day. Besides, it is located in front of the Metallist Stadium – the major attraction of the Kharkov.

If you’re still wondering how to make dull Soviet high-rise buildings look attractive, the artist Palval Andrey has an answer. He decorated the series of facades with bright murals of birds, which we can spot in our while strolling the park. For instance, there are owl and finch paintings at the eighth floor level so that the top point of the image is 20 meters (65 feet) above the ground.

Klavdiya Shulzhenko was a Soviet singer and actress born in Kharkov who earned the honour as the People’s Artist of the USSR. One of the murals depicts her holding a poppy flower, as a symbol of the memory of those killed in the Second World War. She went to the front quite often during the war, performing for the soldiers. Klavdiya Shulzhenko was a woman with a big heart. Thus, it’s not surprising that her portrait appeared on several walls of the city’s buildings.

In the very city centre, one can discover an amazing mural of Leonid Bykov. The Soviet actor and film director was studying in Kharkov and starting his acting career at the Ukrainian Drama Theatre, located on the same street. Meanwhile, the art piece on the wall depicts the scene from Only Old Men Are Going to Battle – a legendary film every Ukrainian knows.

Perhaps the most well-known person across Ukraine is great Ukrainian author and painter Taras Shevchenko. Therefore, the creation of the portrait was dedicated to the 200th anniversary of his birth in 2014. For the project, the artists from the well-known Kailas-V studio used around 900 bottles of spray.

This mural was one of the first wall paintings in Kharkov. It features the motanka doll, which is considered to be a traditional Ukrainian charm. The creation took place in 2013 as a collaboration of the local studio and French artists Julien Malland (aka Seth) during the festival of French Spring, organized by the French Institute in Ukraine (Institut français d’Ukraine).