A Brief History of Petrikivka Painting 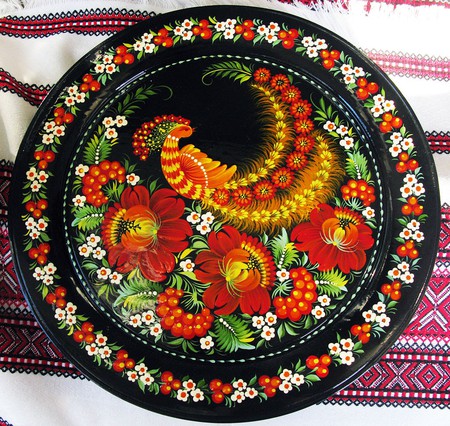 The history of Petrikivka painting traces back to the 18th century but also has ancient pagan roots. It is a traditional decorative art that still remains a calling card of Ukraine and central part of the country in particular. With the bizarre ornaments, bright colours and curves, everyone falls in love with this art in a couple of seconds.

Before the Christianization of the Kievan Rus, people believed that within beautiful ornaments lay a magical power to protect people from evil forces and unhappiness. That’s why Petrikivka painting served as a guard and was often painted on weapons and homes of Zaporozhye Cossacks. But the real history of this style of painting started in the 18th century when the first settlers arrived in Petrikivka (Dnipro region).

The citizens of a small village created a custom: all the women painted the walls of the huts with flowery colourful patterns. They painted with special brushes, made of cat hair, or simply with their fingers. The main feature of the floral painting was the location in the centre of the image of three large flowers, from which came smaller flowers and buds, curves and stalks.

Wall paintings, which have been created with homemade dye from the juice of plants, in the 19th century, were replaced by oil paint and watercolours. Moreover, women started to make sketches and decorate not only the exterior but the interior, furniture and even cutlery. The amateur art gradually turned into easel decorative painting and introduced a lot of masters: Tatiana Pata, sisters Pavlenko and Nadia Bilokin. After the Second World War, these professionals initiated the output of Petrikivka painting in the artistic industry at the Kiev factory of souvenirs. Thus, developing the art further and bringing it to its current state.

From generation to generation, the traditions of the Petrikivka painting were subsequently becoming more refined. Modern Petrikivka ornament is based on a careful study of the real forms of flora and the artist’s skillful interpretation of bright colours that do not exist in the real world. In 2003, Petrikivka painting was recognized by the UNESCO World Heritage Site.